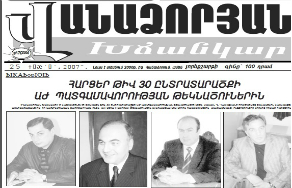 The two newspaper published in the Armenian city of Vanadzor, Vanadzoryan Khjankar (“Vanadzor Mosaic”) and Loru Marz (“Lori Province”), aren’t expecting to rake in huge revenues during the election campaign. They are ready to print political ads “without discrimination,” if, as Loru Marz’ editor Manvel Mikoyan says, they “favor giving an ad.”

The papers’ managers have decided not to differentiate between political and commercial ads — there won’t be a price difference. “An ad is an ad. What difference does it make if it shows a bottle of Coca-Cola or a staffperson? If New Year is approaching, they advertise to sell New Year’s products, and during elections, they want to gather votes, so they buy that ad,” says Vanadzoryan Khjankar Director Haykaz Simikyan.

This year, Vanadzoryan Khjankar expects to distribute political ads through the use of inserts so that the entire paper doesn’t turn into one big ad and the volume of other subjects of interest to readers is not decreased. By law, advertising shouldn’t exceed 20% of the paper’s content. If has additional advertising, the paper will have to publish more pages.

During the 2007 parliamentary election, Vanadzoryan Khjankar also published information describing the candidates nominated in the city. In two of its issues, the paper introduced the province’s candidates, according to precinct. It asked the same questions to all candidates: from the biographical to political plans. This time around too it plans to report on the candidates nominated under the majoritarian system (by which MPs are elected on an individual basis) and their plans.

However, as Simikyan notices, the issues published ahead of elections are the year’s worst issues with respect to sales. “We printed the candidates’ photos on the front page; they saw it and didn’t buy the issue,” he says.