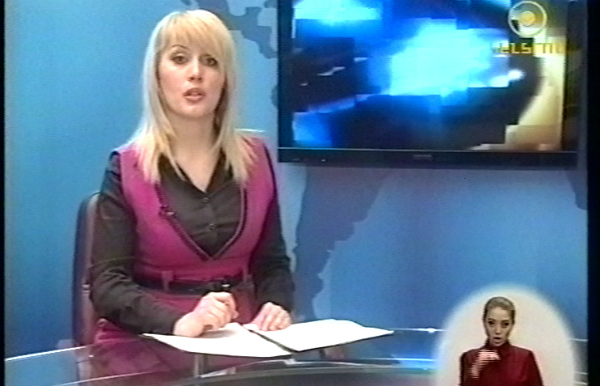 Kentron TV’s Epikentron (“epicenter”) news program broadcasts news once daily in sign language. Though the initiative is welcomed by the deaf and hard of hearing community, some fear that on the threshold of elections, the TV station’s intentions behind the move are far from noble.

It’s been a week since Epicenter has been broadcasting news in sign language in its afternoon slot.

President of the Armenian Deaf Association Grigor Grigoryan says the move has enlivened the life of their community but the chosen broadcasting slot is not ideal as many are at work during the day.

“It would be more appropriate if it was [broadcast] in the evening, as everyone would be able to watch,” he says.

Furthermore, a single station’s news program does not satisfy the needs of the deaf and hard-of-hearing community in Armenia.

“It would be good if sign language was offered in the news programs of Public TV and Armenia TV, as well as in the 1-02 TV series,” he said.

Epicenter began broadcasting in sign language after Prosperous Armenia party leader Gagik Tsarukyan (who owns Kentron TV) paid a visit to the Armenian Deaf Association. The party leader discovered that there were no channels offering the news in sign language and promised to resolve the issue. A few days after the meeting, Epicenter fulfilled Tsarukyan’s promise.

Epicenter news program editor Artur Azaryan says the issue of the deaf and hard-of-hearing community being informed has always been of concern to them.

“But Gagik Tsarukyan’s meeting with the deaf and mute [community] essentially was the pretext to give [the issue] form and lead it to the ultimate result,” he says.

Journalists for the Future NGO President Suren Deheryan, who first raised the issue of television being inaccessible to the deaf community, finds that Epicenter’s afternoon news program doesn’t ensure their right to be informed.

“Perhaps it’s welcoming that a private TV company addressed this problem, but at any moment, just as it created it, it can tomorrow, or seized on condition, pull the plug after elections,” he said. Note, Armenia’s next parliamentary elections will be held in May of this year.

According to the journalist, the problem will be finally solved when Armenia’s state-funded Public TV will be obliged by law to have one news program offering sign language.

“So that even if it’s pulled tomorrow, it will be possible to reinstate it through the power of the law,” he said.

The law stipulates that Armenia’s Public TV must broadcast at least one children’s and one news program per day in sign language or in the Armenian language. Armenia’s Public TV channel H1 prefers to broadcast its news to the deaf and hard-of-hearing community through the use of subtitles (note: not in closed captioning), which many in the community say is not actually accessible to them.

It’s been over a year in which there hasn’t been a single news program in Armenia offering sign language. Previously, ALM TV was offering this option; however, the TV station was deprived of its broadcasting license and has been off the air since Jan. 20, 2011.

In this regard, The Voice of Silence, a group of deah and hearing-impaired youth, issued an open letter to Armenia’s National Commission on Television and Radio (NCTR) President Grigor Amalyan, asking the Commission not to ignore the right of 3,500 hearing-impaired citizens to be informed and to take immediate measures in interpreting news programs for the deaf and hearing-impaired. In response, Amalyan had said there are TV stations in Armenian that broadcast news with Armenian subtitles.