What’s It Like to Work as a Journalist in Vanadzor? 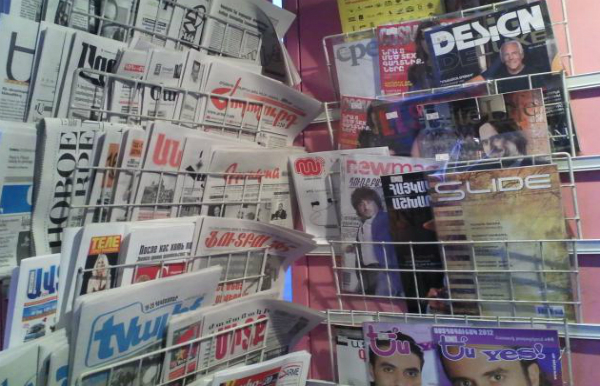 Two in-house reporters work for the Vanadzoryan Kjankar (“Vanadzor’s Mosaic”) weekly paper, each writing 4–5 pieces a week to cover the paper’s news section. The reporters are prohibited from working for other news agencies. There’s no honoraria here — there’s a stable monthly salary.

Journalist Tiran Manucharyan, for example, moved from Vanadzor’s Lori TV company to Vanadzoryan Kjankar for the higher salary. He couldn’t combine the television and newspaper work. “I couldn’t provide daily stories to the TV station then at the end of the week publish those same pieces belatedly in the paper.”

Vanadzoryan Kjankar’s other reporter, Gayane, at one time reported for Aravot and A1+. She noticed that the same news reporter is confronted with different attitudes depending on which news outlet she represents.

“The same official greets you that day as a Vanadzoryan Khjankar journalist; the next day, as a A1+ journalist; the following day, Aravot’s journalist. They [i.e. officials] give different information of varying depth to different news outlets. If they know that [the news] is going to be made public only in Vanadzor, it’s no problem. But if they know that the same [news] is going to be published also in the Yerevan press, they become more cautious [in what they say],” says Gayane.

“They think if we tell our problems to a media [outlet] published in Yerevan, our mayor and our village head will resent us. I notice an atmosphere of fear, a kind of not wanting to upset the leaders,” says Nelly. “But they can very freely tell a local news outlet that this problem exists.”

Nearly none of Vanadzor’s journalists are happy with their salaries. They say they’re not paid in accordance with the work.

“I’m displeased with the remuneration. There hasn’t been a paper where I get paid in accordance with the work I do. Particularly if you work in the province’s borders, you go to a village, you have to get paid for [all the expenses associated with] the business trip. Everything has to be considered, the time you spent, your fatigue,” says Nelly.

“But who’s happy about their pay? Of course, it would be preferable if I was better paid. I don’t think there’s a big difference in the remuneration received between local and Yerevan newspapers. I have many friends [working] at Yerevan news outlets and I know no one who’s happy with her salary,” says Tiran.

Journalist Edward Arzumanyan prefers to work with news outlets based in Yerevan and generally doesn’t write for any Vanadzor news outlets. He is the Lori marz correspondent of the daily paper Hraparak and the news.am news site; he also has his own news site, lorinews.com.

“To publish a piece in a local newspaper, local journalists today get a shameful pay. For that same piece, the journalist gets paid several times more in Yerevan,” says Edward, noting, however, that the work of local journalists is harder than that of those in the capital.