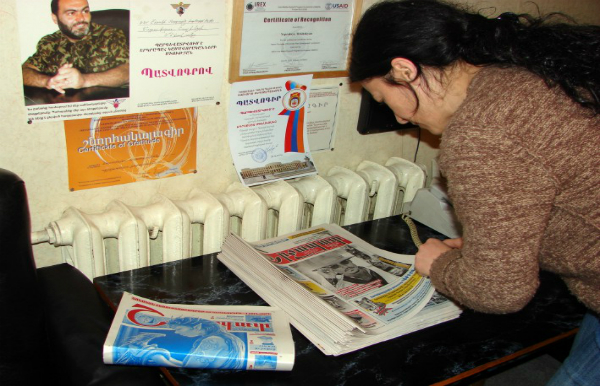 The Gyumri-based weekly Shrjapat offered a New Year’s surprise to its readers. After a long break, the newspaper was printed in color, returning to the colors characteristic of the paper since its inception and adding one more — blue.

“The matter of standing out was always there, since the day of its inception,” says Shrjapat director Yepraksya Mekhakyan. “The first issue was published on May 19, 2004; the first and last pages were dichromatic — red and black.”

In widespread uniformity, the bright colors attract readers. When it comes to newspapers, people hold an interesting stereotype: according to them, black is not a color. In other cases, if a paper is completely printed in, say, blue or green, it is considered in color. “But it’s considered in color if you use a minimum of one or two colors,” explains Ashot Gharibyan, who works on the weekly’s design. “From the weeklies, Hetq also used this style — it made its banner yellow and black, which made it stand out.”

Shrjapat’s founders, before making this decision, examined foreign and Russian experiences. The print media market suggested that to be recognized quickly and become established, what was required was first color, then engaging pieces. “There were people in Gyumri that recognized our paper from its red-black banner. Since Shrjapat was sold not only in newsstands, but also through itinerant sellers, we found out from them how readers asked to give them ‘that red paper’,” Yepraksya recounts.

Different people perceive the same product differently. For one person, the paper is simply a name; for another, a color; for the third, the continuation of an article that interests her; and for the fourth, a horoscope and the classifieds.

Color printing is an expensive luxury, but the founders consider the expenses on the road to becoming established and acquiring readers to be justified. Five months after the paper was created Shrjapat already had a stable readership and bicolor printing had its role in this. Chromatic issues began in 2008 when the Gyumri print house, as a result of first paper, then building issues, shut down operations. During that time, Shrjapat was printed first in Vanadzor then in Yerevan, then again in Gyumri. The quality didn’t suffer, and the vivid red that differentiated it from other papers never left the cover.

“The capacity of leased printing presses were insufficient for color printing. We began printing in one color and that had an effect on sales,” says Yepraksya. In addition, the price of the paper went up from 100 drams to 150 drams, and the crisis also had its impact.

In 2011, Asparez Journalists’ Club brought a new printing press to Gyumri and this allowed Shrjapat to bring back color printing. Ashot Gharibyan believes that advertising will cover the additional cost of printing in color.

“We are solving a branding problem,” says Yepraksya Mekhakyan. “People’s eyes had gotten used to the bicolor Shrjapat. For a long time, we were achromatic and we lost potential customers. We survive on self-financing; there’s no assistance or sponsorship. That’s why we’re constantly searching.”