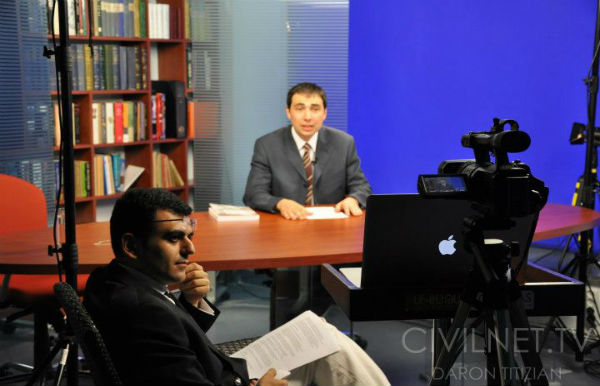 A new online TV news site and a daily newspaper are the latest additions to Armenia’s media industry.

About a month ago, the Civilitas Foundation launched two new media projects: CivilNet, an online TV channel, and Orakarg (“Agenda” in Armenian), a financial daily.

Civilitas Director Salpi Ghazarian finds that these news portals are an alternative to other news outlets operating in Armenia’s media industry — in terms of both style and content.

“We don’t have taboo subjects, and we don’t protect anyone’s political interests. We speak with such political figures whose opinions we definitely don’t share, but we talk with them because we respect our readers and visitors,” she said.

According to Ghazarian, the newly established news outlets expect to participate in broadening Armenia’s public and civic dialogue and more effectively improve the surrounding environment. The decision to broadcast online is due to their target audience.

“That young, professional generation which wants somehow to become informed on topics of interest uses the Internet. Finally, the Internet is the medium of this century,” she said.

Orakarg daily, having a print run of 2,000 copies, likewise aims to publish information that’s impartial and contains various opinions — without pursuing any “agenda”.

Though the newspaper covers public and political life, culture and sports, it’s called a financial newspaper since half of the paper’s 8 pages are devoted to finance news. Orakarg editor Karen Harutyunyan finds that readers need to be provided with objective finance news free from politics.

“However, we can’t say that this might become a newspaper for the masses. The way we picture it, the contingent consuming our product is the highly educated middle class which has a demand to hear not that which is pleasant to them, but that which is close to reality,” he said.

According to Harutyunyan, there’s an agreement with Civilitas that Orakarg’s editors are independent in selecting and covering topics.

“We’ve reached an agreement in principle that management shouldn’t interfere in the paper’s daily activities — even whether Civilitas founder Vartan Oskanian will publish his article in our paper or not is decided by the editors. This is an important precondition to development,” he said.

In the words of Yerevan Press Club media expert Haykak Arshamyan, no matter how much they say that news media are aimed at the development of civil society, in the modern world, media too is political — there is no media that is not in politics.

Arshamyan finds that CivilNet and Orakarg are political projects — their main purpose being to bring president of the foundation Vartan Oskanian to politics.

“The former foreign minister entered the media industry with two media [products] at once. All political forces today understand that without media they can’t have a serious place in the political arena. And since in this case Oskanian doesn’t possess any leverage in television, he did right to launch two media [outlets],” he said.

Arshamyan finds that despite everything, the existence of new — particularly financially stable — news outlets is a positive step in terms of ensuring media diversity. In the expert’s opinion, however, associated with the lack of prospects for media development, Orakarg will be short lived and will shut down after serving as a flyer just ahead of elections.