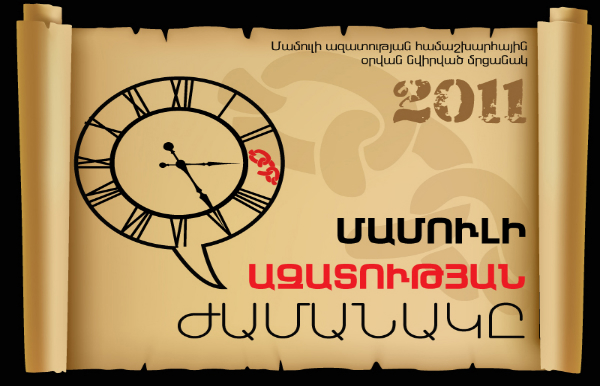 The prize is awarded in Armenia within the framework of World Press Freedom Day, which aims to raise awareness and remind governments and the public of Article 19 of the Universal Declaration of Human Rights, which protects the fundamental principle of freedom of expression.

The United Nations General Assembly declared May 3 to be World Press Freedom Day in 1993, which marked the anniversary of the Declaration of Windhoek, a statement of free press principles put together by African newspaper journalists in Namibia in 1991.

The 2011 World Press Freedom Day celebrations will be held in Washington, DC, from May 1–3. The theme of this year’s event is 21st Century Media: New Frontiers, New Barriers. A joint message by UN Secretary General Ban Ki-moon, UN High Commissioner for Human Rights Navi Pillay and UNESCO Director-General Irina Bokova emphasized the need to bring freedom of expression principles to the online world.

“Over the last decade, more than 500 journalists lost their lives in the pursuit of their profession. Sixty killings were reported worldwide in 2010 alone… State authorities must do everything to counter impunity and to protect the safety of journalists,” reads the message, in part.

World Press Freedom Day plenary sessions will be held at the Newseum, an interactive museum devoted to journalism, though many of the events can be viewed online through the Webcast Series.

The events planned to take place this year can be followed on Twitter and Facebook. The hashtag for World Press Freedom Day is #WPFD.