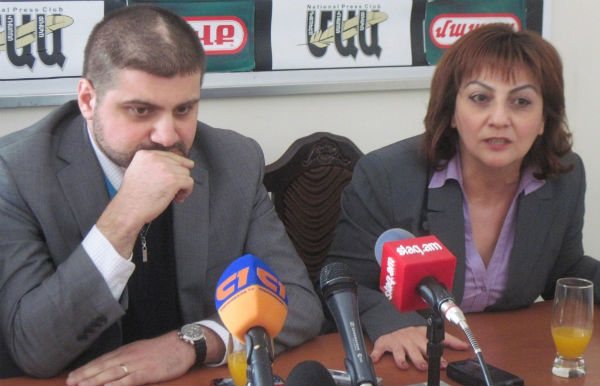 Jamanak chief editor Aram Babajanyan finds that these lawsuits are Kocharian’s reckoning for all those who write anything other than good things about him. However, Babajanyan adds, they won’t be silenced.

“We will continue to work because I believe in the freedom of speech in Armenia. Neither will we go the way of Charents: we will write with open text, we will work, as much as our opportunities and [financial] means allow,” he said.

Hraparak chief editor Armine Ohanyan says these lawsuits take the country back to the era of the Soviet press.

“Now they preach journalism with [foot]notes, background and implication,” she says, implying that freedom of speech is stifled as journalists can’t write directly what they mean.

Editors blame the decriminalization of insult and defamation in the abundance of lawsuits against news outlets, which, according to them, permitted oligarchs and politicians to open up their appetites, while keeping their hands free.

Ohanyan says decriminalization of the law in a country like Armenia is simply destructive for print media.

“When an article written by someone is punished by the criminal code, the issue of personal blame and personal accountability arises. That is to say, the author of the article in question bears responsibility for every word he writes. But in this case accountability has been moved to the organization carrying out journalistic activities. We eliminated the individual’s personal responsibility and brought it upon [the agency] that is carrying out journalistic activity, which stands before the threat of shutting down,” she said.

The editors find that RA Human Rights Defender Karen Andreasyan bears direct responsibility for this situation, because he “cooked this dish” and now he has to help news outlets to get out of this mess.

“Those admonishments with which he addressed judges last week, for them to be more tolerant, I think it’s embarrassing for a defender of human rights,” said Babajanyan.

The Jamanak editor finds that instead, the ombudsman should’ve met with editors and appealed to the National Assembly to immediately undertake amendments to the law.

In Armine Ohanyan’s opinion, the amount defined by law has to either completely be eliminated or become symbolic, if it doesn’t intend to shut down the newspaper.

“Retracting that which was said is already punishment. No newspaper editor gladly prints a retraction. Printing a retraction is sometimes more painful than paying an amount — when we’re speaking about a small amount, of course,” she said.

The Hraparak editor urges her colleagues not to become judges and to self-organize, in order to protect their own interests and oblige amendments to the law.

“There were a few ugly reports tied to lawsuits; even our journalist colleagues taking on the position of judges say well you shouldn’t have written this word like that, said this word like this — there wouldn’t be this court action. But be sure, someone will appear who will take you too to an unpredictable place, will bring you and get you into a court process,” she said.

Aram Babajanyan as well asks his colleagues to show solidarity — to reprint the published articles that were cause for legal proceedings in their own newspapers. He finds that this could be a good means of fighting against the libel suits.

The editors thank their readers, who offer their help and support. The Hraparak editor says that the daily’s readers are ready to hold a demonstration and a hunger strike, while Jamanak’s American readers have decided to organize a fundraiser and make donations if the newspaper loses in court, so that the paper will be able to pay the 6 million drams.