How the Media in Armenia Worked in March 2008 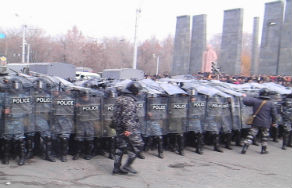 March 1, 2008, was one of the hardest days for journalists working in Armenia. Work began at dawn at Liberty Square then moved to Grigor Lusavorich St. The day ended with the president declaring a state of emergency.

The 4th point of the 20-day state of emergency decree in Yerevan was about the work of the media. Under the term of the state of emergency, “mass media reports concerning state and internal political issues” were limited only to “official information by state bodies.”

The state of emergency created exceptional conditions for news agencies and journalists. TV channels broadcasted state information exclusively and Azatutyun Radio (RFE/RL’s Armenian service) wasn’t being broadcast. The work of online publications was restricted. Azatutyun.am, hzh.am, a1plus.am and many other well-known news sites were shut down.

Internet censorship was carried out in two ways: first, the Armenia Network Information Centre simply froze a few .am domains. That is, the sites were accessible only by their IP addresses.

Later, the Armenia Network Information Centre, coming under international pressure because of unlawful actions, stated that freezing the domains was mandated by National Security Service (NSS) and issued the following the statement: “When a state of emergency was declared on Mar. 1, 2008, the National Security Service of the Republic of Armenia asked the Armenia Network Information Centre to freeze certain domains.”

Second, internet providers were put under pressure. They were ordered to block access to Armenian news sites that didn’t have .am domain names, such as, for example, armenialiberty.org. Even YouTube came under fire — it was blocked in Armenia for 2 days.

During the state of emergency, internet users in Armenia learned to go around the information blockade, making use of the services of anonymous providers. Their use for accessing media and opposition sites blocked by internet providers was widespread.

Blogs and social networks became the main means of seeking and spreading alternative information. It was bloggers who began to present the events of Mar. 1 online, becoming the sole source of news at the time. The most active were the bloggers on LiveJournal. News was disseminated through email. The potential of mobile phones was used. Information was disseminated with the help of smses, while photos and video were shared through Bluetooth.

The state of emergency days in 2008 became an impetus for the development of internet technology in Armenia. As a result, alternative media resources are becoming more and more popular in the country.