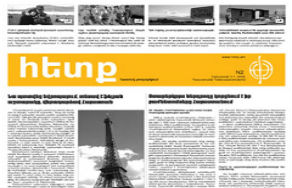 Hayrapetyan explained to the Special Investigative Service that “on Feb. 2, 2011, some journalist called him and wanted to ask questions. That day, being in no mood and having health issues, he referred the reporter to contact his press secretary for any issues that interest her and he put down the receiver.

“Then the same reporter again called, from which indignant, he uttered dishonorable remarks to her. He noted as well that he didn’t intend to and didn’t obstruct the journalist’s professional activities; at press conferences, during interviews, personally or through his press secretary, he has always responded to their questions, providing the information they are interested in, which were received from the relevant services of the RA Football Federation or RA National Assembly.”

“Through the comprehensive, full and objective examination of the facts acquired during the materials preparation process, through their analysis and general assessment, it has been found that Ruben Hayrapetyan has not obstructed the professional activities of journalist Grisha Balasanyan, has not censored her reports, has not violated the professional independence of Hetq’s editors and has not unlawfully intervened in the activities nor unlawfully suspended or terminated the activities of mass media, and has not violated the journalist’s rights as defined by the RA Law on Mass Media,” reads the decision.

The Special Investigative Service also notes the issues raised by Grisha Balasanyan are civic in nature and can be resolved through (civil) court.