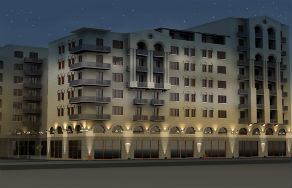 The Glendale Hills vs. local daily Jamanak trial began at the Court of General Jurisdiction of Kentron and Nork-Marash Administrative Districts in Yerevan today.

Glendale Hills is asking the newspaper to run a retraction on its Aug. 26, 2010 piece titled “Glendale Hills Offers $1,000 for Silence,” in which the paper writes:

“A well-informed source informed us that Glendale Hills’ Gyumri representatives, after the collapse of one of their constructed buildings in Mush-2 district in Gyumri, attempted at all costs to convince residents not to inform news outlets of what had happened. The paper’s source, who didn’t wish to identify himself, said that Glendale Hills offered $1,000 to residents, as well as promising to quickly rebuild their apartments, only that the issue doesn’t leak out to news agencies, otherwise they threatened that they wouldn’t reconstruct the apartments. The affected residents refused Glendale Hills’ shady deal.”

The developing company is asking the paper to retract this news which harms the company’s business reputation and compensate for incurred damages, the amount of which the plaintiff has not yet declared.

The judge granted the defense’s motion to postpone the trial for 10 days. Jamanak representative Arsen Mesropyan asked for time to become familiar with the case materials, explaining that he came on board as defense attorney just yesterday.