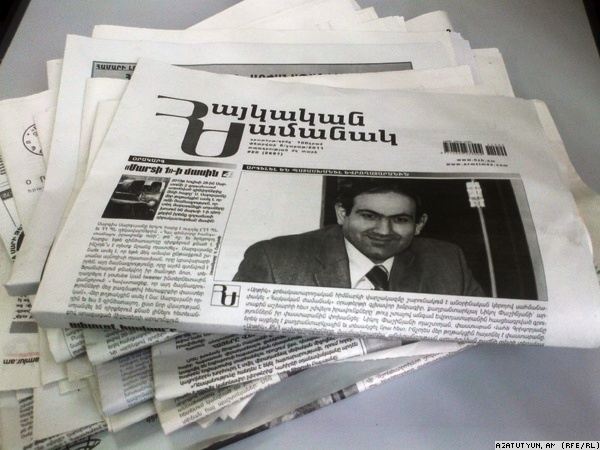 The Court of First Instance of Kentron (Center) and Nork Marash Districts of Yerevan sustained the lawsuit filed by Armenian MPs Levon Sargsyan, Samvel Aleksanyan and Ruben Hayrapetyan against local daily Haykakan Jamanak (“Armenian Times”). Judge Karine Petrosyan ruled Dareskizb LLC, owner of Haykakan Jamanak, to pay each plaintiff 2 million 44 thousand AMD (about $5,600 US) — 2 million in compensation plus 44,000 drams for the state duty for filing in court, instead of the 2 million 500,000 drams requested by each plaintiff.

The request for a retraction was granted in full: the court charged the paper to print a retraction, at the latest within a week after the ruling is put in effect.

Recall that Haykakan Jamanak, in an article titled “Seven of the Eight Are on the List” published on Oct. 14, 2010, reported that a number of Armenian officials had ties with Russian criminal groups or were connected to various criminal cases being investigated in Russia.