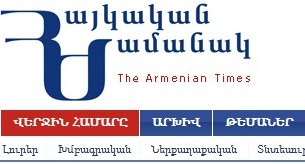 Dareskizb’s defense attorney Vahe Grigoryan was not present in court due to illness. Upon a motion by the plaintiff, the session, nevertheless, continued. Judge Karine Petrosyan declared the trial over, stating that the judicial act will be announced on Feb. 7.

Recall, the members of parliament are demanding Haykakan Jamanak retract information published in its Oct. 14, 2010 issue in an article titled “Seven of the eight are on the list.” In the article, Haykakan Jamanak reported that some Armenian officials, including the aforementioned deputies were connected with a number of criminal cases mainly involving narcotics, trafficking and money laundering being investigated by Russian law enforcement bodies. The MPs insist that the publication of such material discredits their honor, dignity and business reputation. As a result, they are asking Haykakan Jamanak for 7.5 million drams (about $20,500 US) — as compensation in moral damage and court expenses.

Attorney Anahid Sardaryan, representing the plaintiffs, expects that “the paper will print a retraction and will beg the pardon of both the plaintiffs and its entire readership for publishing such misinformation.” She considers the defense’s absence in court to be negligence on their part. The plaintiffs maintain the defense also was not present in court in two preliminary sessions.

“In previous court sessions, I wasn’t the representative of Dareskizb LLC, but of Nikol Pashinyan, who, for understandable reasons, was unable to present himself in court, and because of illness, I could not be present in this court session,” Vahe Grigoryan told Media.am.