“Media outlets have to fight for freedom” 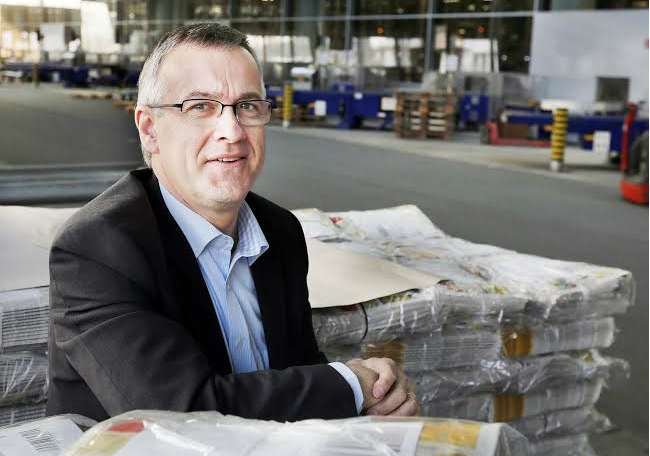 Germany’s authoritative daily newspaper Wiesbadener Kurier has been published since 1945. Circulation: 56,085. The paper’s creative team is comprised of the editor-in-chief and an additional 20 editors, 40 permanent journalists, and more than 100 correspondents. Among the freelancers are not only professional journalists, but also students and pensioners. The 32-page paper also has lawyers with whom the editorial staff consult to decide the appropriateness of publishing information that is controversial and has unpredictable consequences.

The company representing the newspaper is one of the largest companies in Hesse, which owns the local papers of not only Wiesbaden, but also Mainz and several other German cities. The paper is a self-financing, independent organization, which generates profits mainly through subscription sales and advertising.

Wiesbadener Kurier editor-in-chief Stefan Schröder says that objective, balanced, and factual published news is the cornerstone that, from the great alternative of the independent media market, keeps consumers loyal to their newspaper. The code of ethics for media is strictly maintained, from not publishing photos or information about someone without their permission to ruling out “copy-pasting” and citing sources.

Apart from being a current newspaper, Wiesbadener Kurier is also a big school for young people entering journalism. Schröder attaches great importance to the staff imparting professional knowledge to the youth. For example, there is now a huge waiting list for one-year editorial internship applicants.

Mr. Schröder, you’re a self-sustainable organization; you have a large team, resources, and a powerful army of readers.

Our organization has various infrastructures that are responsible for producing the paper. Editorial is only one department. Our organization’s subsidiary publishing house is located 25 km from Wiesbaden, in Rüsselsheim. There we print not only our paper, but also Frankfurter Allgemeine Zeitung Mainz, Darmstatädter-Echo, and many other newspapers and magazines.

We have a separate company that deals with management and is in charge of newspaper sales. There’s also a commercial division, which is in charge of advertising, classifieds, and inserts.

It’s noticeable that both in the paper and on the website, the amount of all the published material is quite small.

Our principles are like this: everyone has to write in small amounts and not as much as they want. Professionalism is also imparting what you have to say as succinctly as possible.

Our writers also have to have additional stories that don’t get old. Apart from daily briefings, the editors of all the departments have to speak with each other once a week, to check the paper’s activities.

As for international news or big politics, we work with the DPA news agency, which provides current information, for example, from Washington, Moscow, Berlin, and other cities. We have a correspondent organization in Berlin, which works with different newspapers. We can assign a job for a topic that interests us, and they’ll do the interviews for us. We have correspondents in a lot of cities, who instantly respond to any news event.

Let me say that at our paper each journalist is engaged solely in their field.

As far as I know, the print version of Wiesbadener Kurier isn’t sold all over Germany.

We have an efficient mechanism for subscription: 90% of our readers pay once a year, and they get the paper every day in their mailbox. Of course, in many cities, the print newspaper is sold directly. I don’t know how well it’s known in Armenia, but in the world, readers follow our website, and many subscribe also to the e-version.

At the beginning of our conversation, you said journalists in Germany don’t ask for interviews from officials — they demand them. Is it possible to get any information from public servants, do they work so transparently?

Yes, state officials work openly. This, of course, doesn’t apply to the private sector. A journalist’s right to receive information must be respected, and state agencies are obliged to inform the public about their work through the media. Rarely is the necessary information not received.

If, for example, a state official refuses to answer a journalist’s questions, the next day we write that this person acted this way. And at once a question arises for everyone: is he hiding something? We want to hear answers from him. And so, matters are resolved this way. However, we live in a democratic country, where freedom of speech is protected by law.

German mass media are now being criticized by various public and political groups for reporting on the refugee issue in a positive tone. This is a serious problem for us today because a large army of the discontented has formed that is against the flow of refugees from Islamic states in particular, and in general, to Germany.

The activists of the Pegida movement in Leipzig are organizing rallies, calling media outlets “liars.” The media outlets are trying to create an atmosphere of tolerance, urging the public to show support for the refugees. We’re trying to restrain this public outrage with counterarguments, pointing to the positive impact of the presence of foreigners in many areas.

As a result, we face resistance from some segments of society.

Alongside the growth of websites and social networking sites, print media faced a serious crisis. The loss of readers and financial difficulties forced some newspapers to shut down, and many are being printed at the cost of reduced staff and circulation. Do you have a crisis of readership?

Of course that problem exists in Germany too; moreover, in Germany, the senior generation, which was a champion of the print newspaper, is declining, while the native Germans of the current generation, who have good command of our language, are few and are not newspaper consumers. Our public is comprised of a large amount of foreigners, who don’t read the paper a lot.

Today we have as many readers as we’ve never had, but unfortunately, they are readers of the e-version and they don’t pay for the information. To counterbalance the financial risks, we’re developing new models. For example, for us, it’s like this in principle: if a reader accesses information 50 times in a month, he has to begin paying after he’s reached this threshold.

Of course, not everyone does this. Advertisers likewise prefer the electronic version because unlike the prices of the print newspaper, the prices on the website are far lower. Printing a newspaper is expensive. Despite this, we have a segment of readers who under any circumstance are loyal readers of the print version.

In the whole world, the most read stories are about accidents, tragedies, deaths. What’s your position on this stress-evoking news?

Media outlets are the mirrors of reality. Of course, besides tragedies, positive things aren’t few in life either. Specifically we, in principle, maintain balance in the media when alongside information about disasters and calamities, we publish also positive things happening in reality — the negative is not perceived as acutely, and people aren’t stressed.

Our media outlet is not inclined to bring readers to the newspaper by subjecting their mental state to trauma. We can post news of this nature in moderation on the website, but the motive for this is to inform people. For example, by cautioning that you might get stuck in a traffic jam on this road because of a certain accident.

That is to say, the tendency of this journalism is not to ensure website visits through manipulation — it’s only for information. In the newspaper, too, we publish news of accidents and disasters due to which regular public life has simply been disrupted. We fulfill our duties in good faith. Unfortunately, these days, yes, many media outlets abuse the stream of such news.

Is there a tradition of German media outlets being “fed” by government or opposition financial streams?

I can assure you that there isn’t. Of course there are official party newspapers. The German press is sponsored not from left or right parties, but from the paper’s earnings. We are independent organizations, and financial resources come from the media market. You can notice newspapers that don’t hide their sympathy for liberals or conservatives, which, to put it mildly, isn’t encouraged, but to sympathize doesn’t mean to be funded by.

But considering the characteristics of the media industry in different countries, I can say that 20 years ago, Germany also had many problems. Our freedom today is a freedom gained as a result of a long fight. You have to fight.

They say it’s impossible to carry out corruption in Germany because after journalists expose the case, the public “devours” the person in question, demanding his removal from the system.

In Germany, journalists’ powers are extremely important: we, in particular, are the overseers of the state apparatus. Our work, apart from keeping officials vigilant, also brings benefits. After all, we raise issues in order for them to be resolved.

I have my position on corruption. For me, corruption is not only the extortion of unearned money; it can be a mutual agreement on some issues. For example, if I tell you that I’m ready to do this thing for you and I expect you to do something for me in return, that too is corruption.

If during elections, you make an agreement with a candidate, for example, to help in some matters, and expect that after he is elected you’ll get permission for construction in some area, that too is corruption.

In general, you should help people, always to do something without expectations and defining your chances, and not cast them into mental slavery or fraud. Germany is not first place each year in a report published on low-level corruption in countries around the world, and that already means it’s bad.

Mr. Schröder, so that what I’m about to say is practical, let me share something very personal. Several times I contacted one of the female officials in the administration with a request, who always answered positively. I told my German friends I want to buy flowers and go thank her. My friends at first laughed then said this isn’t Armenia, she might get angry and offended, consider that I’m offering a bribe. Forget those “traditions” of yours here.

You can give the female official flowers, but its cost shouldn’t exceed 10 euros, and the gift shouldn’t coincide with the dates of submitting or receiving the response to the application. When your business relationship with her ends, that is, the flowers don’t affect the application’s response, you can give them as a thank you gift.