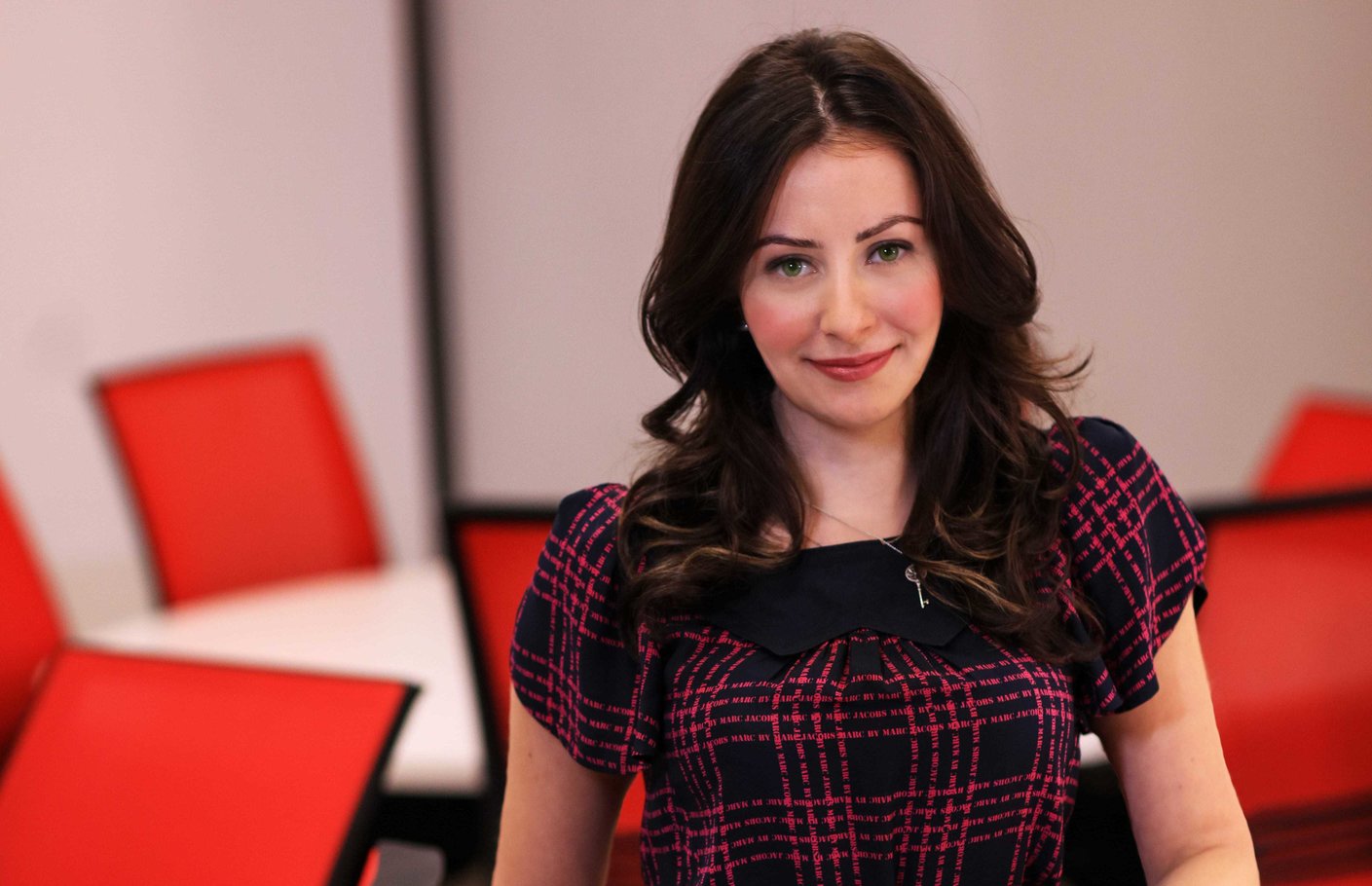 In early June, when Aravot.am reported that a news video produced by Anush Elbakyan, 25, of the Boston Globe had won an Emmy Award, many other local Armenian journalists like me probably began rummaging the webpages of the Boston Globe and searching her name online.

That I would eventually find and connect with Anush, I had no doubt. But it was quite unexpected that the woman firmly entrenched in American journalism who left Armenia with her family when she was 10 years old would respond to the questions I sent in English… in Armenian.

“I obligatorily speak in my mother tongue. From a young age, when my parents’ friends, especially writers, would gather in our house, I heard good, proper Armenian from them and my parents. Unfortunately, I don’t use it now as much as I’d like, but I speak it and try to keep the purity of the language.”

Anush Elbakyan is a multimedia journalist. She is currently a Senior Video Editor with the Boston Globe: she manages the video production department and coordinates the daily video news operations. She is also the executive producer and publisher of a few political, as well as food video series.

Elbakyan won the Boston/New England Emmy this year in the Outstanding News Report — Serious Feature category for “A Day in the Life of Leo,” a video news story she and senior producer Taylor Delench produced for the Boston Globe in 2015.

The author’s voice is notably absent in the approximately five-and-a-half minute short documentary: only in two places do captions briefly communicate that four-year-old Leo came with his young caregiver Alex from Burundi to Boston in 2014 to undergo surgery, and that after the surgeries Leo and Alex will return to Burundi to their separate homes.

The story of Leo receiving severe burns from a fire when he was two and the subsequent feelings are completely described by the simple, human, but profound dialogue between the boy and his caregiver, in between which Alex also describes for the audience that “the fire didn’t burn the boy’s ‘I’,” that Leo is the same person he was before.

Anush believes there are common problems behind the main challenges of professional video journalism.

“The world now moves to a frantic rhythm. This refers to absolutely all areas of our lives, including video journalism. People now don’t want to spend their valuable time on long, hollow, unverified and unimportant news, especially since there’s greater choice in receiving the news — from social networking sites to traditional newspapers.”

So she considers in this sector delivering “short, succinct, and absolutely accurate journalism in an interesting way” is the only way out.

“While video journalism, in my opinion, simply has to adhere to human values and most importantly, be interesting. In all times, [but] especially now, this is what’s valued, what’s watched.”

I had sent only three questions to Anush by email not to deter her from the start because I know that journalists like to ask questions, but they avoid any opportunity to answer questions. I confess that, on the other hand, I hoped deep down that my request to describe recollections from her childhood would elicit such a capacious response that it would become a large and independent piece in my article. I was mistaken: her response was reserved, modest, and taciturn.

“The warmest memories connect me to Armenia and my childhood. It’s my school, our yard, my friends and relatives. It’s hard to isolate any single incident.

“I now remember with a smile how I sang with a fever of 40 degrees in the children’s Silver Key contest in Yerevan, and I can’t forget my performance in Moscow’s huge hall. I was invited to the Morning Star TV show to participate from Armenia. I sang in Armenian, and my performance was very warmly received.”

I can assume why Anush is so brief and succinct in her answers: she is in essence a 21st century American journalist. If you managed to watch even only “A Day in the Life of Leo,” then you saw that she placed a small child’s entire history in a short duration, with all its layers, and there’s absolutely no textual interference. Approximately like so: it’s better that my subjects and the scenes speak instead of me.

So that news is consumed in any country in the world, professional journalism doesn’t like verbosity, and the more apt, important, and interesting information you can insert in a small volume, the higher your mastery.

And here is another one of Anush Elbakyan’s recent video news stories: after the shooting at an Orlando nightclub — with an infographic of data on gun violence in the US and this short message: “This nation cannot be a hostage to fear, and we can make it stop.”