What’s Terrible During War Is The Look In People’s Eyes: Journalists’ Stories

After the 2020 war, Armenian journalists were forced to become proficient in covering war and military operations.

The experience of the 44-day war has hardened Armenian journalists, but it is difficult to go down the same road again, to show the affected communities, empty houses and people.

According to them, war is war, but in September 2022, it will be closer and more terrifying. 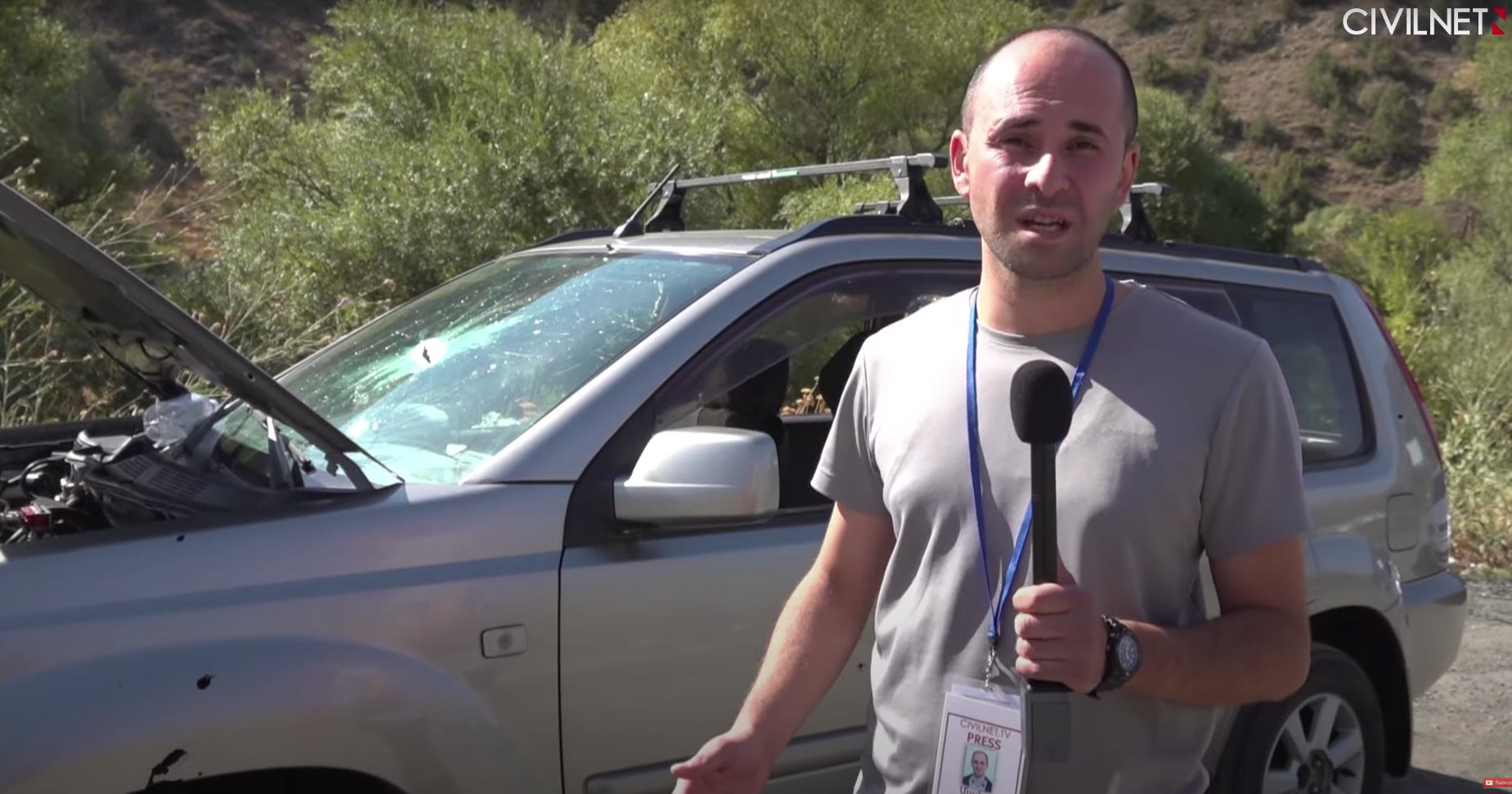 On September 14, the second day of the Azerbaijani military aggression against the territory of Armenia, we were in Sarnakunk village of Syunik. The village is on the road, the sounds of shelling could be clearly heard from the village, and not far away, the black, thick smoke of the burning fields resulting from the shelling and exploded equipment, was rising.

We tried to talk with the villagers. The first man we met was nervously moving right and left, he said that he was waiting for his friend, he had to come by car and take his children to Yerevan. The car arrived, in the back seat of the black “Mercedes” was a little girl, her eyes were red from tears, and she was still crying. That scene has been replaying in my head for several days.

During the war, the most terrible thing is not the sounds of shelling and shooting either far away or close to you, but the terror in people’s eyes. Their fear and pain, especially during combat, is immediately transferred to you. It’s one thing when you photograph the consequences of shelling under a peaceful sky, another when the deadly sound of shelling is added to all this.

After the end of the second Artsakh war, I was trying to overcome a strange psychological feeling for about a month and a half. On October 30, we were in Stepanakert with a journalistic team when we decided to return to Armenia. The road was extremely terrible, but it was not so much the devastation before our eyes (although there were Smerch missiles, burning mountains and exploding cars in different directions), but the atmosphere, the environment in which we were passing that road.

I was driving the car. We got out in the dark with 4 passengers, at first everyone was talking, then there was an incomprehensible silence. The lights of the car were turned off. On the road in the dark, I noticed some movement in front of me, I braked and turned on the lights. Right in the middle of the road, at a distance of two or three meters from us, there was a cow, and its left leg was completely covered in blood. After the war, that cow appeared in my dreams a lot. Then it disappeared on its own.

When I was covering the second Artsakh war, the feelings were different, now they are different. The psychological impact is deeper now. At that time, admittedly based on objective circumstances, I was a journalist covering the conflict of another, independent and self-sufficient state, no matter how much it was our second state, but as a result of decades, it was not considered as such. This time, I automatically model every episode of conflict coverage on myself.

When the military operations moved to the territory of Armenia, at every step you try to relive what the ordinary citizens who were affected by the shelling went through. I saw myself, my family members and my house in those conditions, in that reality. After this last military aggression, we were filming in Sotk. I looked at the destroyed houses and imagined what would happen if the same shell hit our house, I saw the traces of the shells lying in different parts of the road and thought “how would I and my family members escape in those conditions?” You begin to model everything on your family, your community. The feelings are terrible.

War also kills hope: you begin to think that nothing can stop all this. Sometimes you get very disappointed. There is little enthusiasm because you are covering ordinary people who are constantly suffering and conveying their emotions to you.

And how do I overcome it? The answer is simple: working. My professional routine is quite full, it has also dulled my feelings. On a daily basis, you hear and see things that the ordinary citizen does not see and hear and does not even need. You constantly try to distract yourself from the reality that you feel more deeply. Does it work? I don’t know, maybe not. 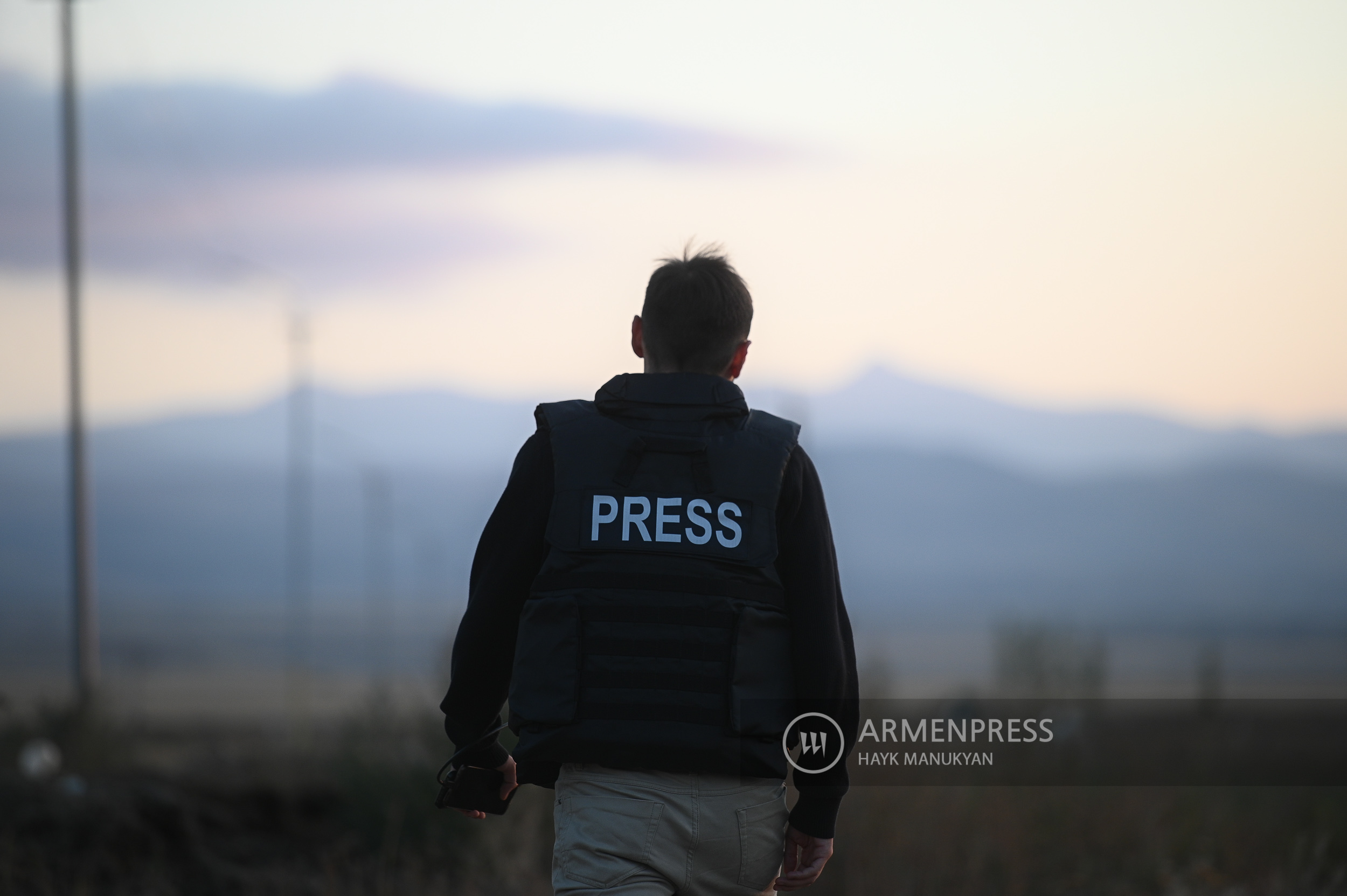 It was not the first time that I covered the life of the border villages and the situation in the positions, but it was the first time that I was targeted by the enemy as a journalist. On September 14, we went to Sotk with a film crew (I was accompanied by “Armenpress” cameraman Hovhannes Mkrtchyan and photographer Hayk Manukyan, as well as 5-6 other media representatives) to cover the targeting of residential houses and infrastructure by the Azerbaijani armed forces.

On that day, it was possible to enter the village only with the permission of the relevant authorities, because military operations were underway.

The village was almost empty, the civilian population had been evacuated, and the sound of artillery could be heard in the distance. For more than two hours we filmed the damaged houses, infrastructure, cars, gardens, and agricultural warehouses in the village.

Seeing the emptiness of the village, I felt both pain for the people and fear that the enemy was becoming more and more ruthless.

We entered a house where there were toys, a baby carriage, and various children’s accessories. When I entered the house, I imagined for a moment how the children were running around, having fun, playing… then you see the hole created by the explosion of the shell, the shattered windows, the damaged roof.

During the war, such scenes affect me the most, when civilians, and innocent children suffer, and are killed because of the ambitions of some powers.

I have always been able to overcome this situation by interacting with those border residents, seeing that despite all that, they continue to live, they don’t despair, but continue to form families.

And as for targeting us, knowing Azerbaijan’s handwriting, we were ready for any scenario, and that incident was not a surprise.

When we had already finished our work in Sotk and were moving to our cars, we heard the “swoosh” and explosion of the first projectile about 200-300 meters away from us. We ran in different directions at once, the second projectile landed closer. Fortunately, no one was hurt and we were able to get to safety.

I have been to almost all border villages: in Tavush, Gegharkunik, Syunik, Vayots Dzor, and Artsakh. I have not seen or felt anything during the service, that is, I am hardened. And I always ask myself, if not me, then who?

Besides, the alternative was to not report, and then we wouldn’t have the facts later. In my opinion, it is possible to fight against misinformation spread by Azerbaijan only with facts.

By the way, the very next day we went to Jermuk with almost the same group. In other words, we have not stopped our work.

I have mixed feelings, that I will completely overcome when there is lasting peace. I have already learned to live with them, I try to distract myself by spending time with friends, listening to music, and finding other different activities.