In November, the Armenian media focused on the incidents near Shushi and the frequent border violations, this time in the sovereign territory of Armenia.

The discussions of the first incident did not refer so much to what happened, but to the efficiency and necessity of the Russian border mission.

The events in Shushi and the Russian peacekeeping mission

According to Channel 5, the unofficial version of the killing of a civilian by a shot fired by an Azerbaijani not far from the Shushi intersection on November 8 is that the Azerbaijani came down from his position and fired at the builders working on the water pipes at close range. As a result, a 22-year-old died and 3 citizens were taken to Stepanakert hospital with various injuries.

“The bloody Azerbaijani provocation was expected,” said Artsakh Foreign Minister Davit Babayan, adding that the holidays would not be holidays for the Turks if Armenian blood is not shed.

According to him, the murder was an order from the state. Apparently, they gave a task together with Turkey. It is not ruled out that these people will definitely receive state awards.

According to the Foreign Minister, today’s Azerbaijani crime is a direct shot against Russia. “Azerbaijan is doing everything to drive a wedge between us and our only ally.”

This issue also mentions that analysts consider what happened to be a provocation against the Russian peacekeeping mission.

According to RA NA deputy Taguhi Tovmasyan, what happened is a slap in the face to the Russian side as well, that is, the peacekeepers are not able to keep the peace. “This can become a very bad precedent if we leave it without consequences.”

The official opinion of the Russian side was more evasive. In a conversation with Petros Ghazaryan on Public TV, the Russian Ambassador to Armenia Sergey Kopirkin did not clearly answer the question about the incident, only mentioning, “I said that every incident receives a response, but we have to look at it from a general point of view, and what alternative could there be? What was signed a year ago allows, in general, to maintain stability in the region.”

However, the newspaper, in its article, making reminders about the incident, asks rhetorical questions. Where are the Russian peacekeepers? Was there an investigation into the murder of an Armenian civilian in Martakert a month ago? Or maybe the mission of the peacekeepers is to take the Armenians to Amaras, pretending that this is the only Armenian church in Artsakh, and the rest are “Albanian.”

On the occasion of the anniversary of the 44-Day War, the Russian Foreign Ministry tried to refute the information fluff on social networks and Internet resources that Russia’s peacekeeping efforts were aimed at “tearing apart Nagorno Karabakh”, “handing over” [lands] to Azerbaijan, and “turning Armenia into a protectorate.”

But all the actions of Russia directly prove it. “The bloody drama of today’s Shushi is proof of that,” the author writes.

In another article, referring to the news that the Russian peacekeeping mission stationed in Artsakh has confirmed the murder of an Armenian resident by the Azerbaijani armed forces near Shushi, and is jointly investigating the incident, writes, “There is no doubt that the investigation will have the same consequences as in the previous cases, that is, no consequences.”

Continuing the topic, the author writes that the Russian military contingent is in Artsakh with the Moscow-Baku agreement to destroy the NKR status and hand over Hadrut and Shushi to the Turks.

“Russia’s official position is that the conflict is resolved, there is no status issue, and communication, social and humanitarian issues remain to be resolved.

The meaning of the demarcation and peace agreements imposed on Armenia from Moscow is the recognition of “Azerbaijan” by closing the Artsakh issue. This is the basis of the issue of the expulsion of Armenians from Artsakh. The presence of Russian troops in Artsakh should be viewed in this context.”

The other event following the incident was initially considered a continuation of the above, but then, when it became clear that the Armenian participant in the incident had nothing to do with the victim, the topic took on a different tone.

A few days after the first incident, in response to provocative actions of Azerbaijani servicemen near the Shushi checkpoint, an unknown person threw an explosive device at the checkpoint, after which the Stepanakert-Shushi-Berdzor interstate road was closed on both sides. 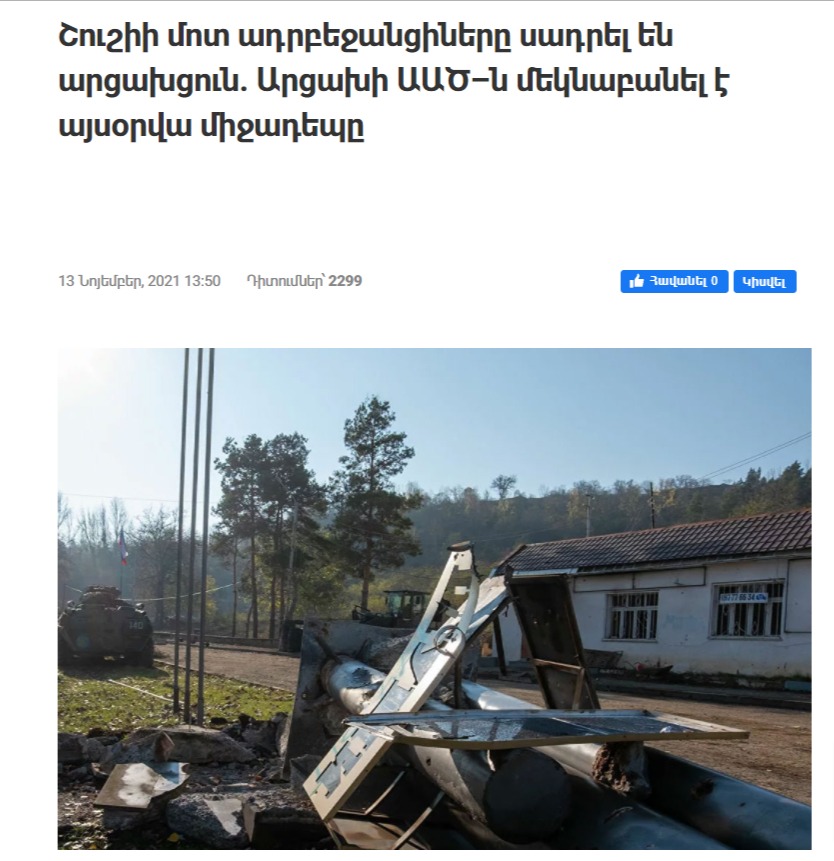 At first, the media wrote that the man who threw the grenade was the brother of a young man killed by an Azerbaijani in the same place a few days ago, and he had come to take revenge, but then it was mentioned that the man had nothing to do with the victim.

The incident became an occasion for Artsakh opposition figures to criticize the local authorities.

In the opinion of Metaksya Hakobyan, a member of the Artsakh “Justice” faction, the incident proves that the people do not feel guaranteed that the Artsakh authorities are sufficient security guarantors, specifically under the leadership of Arayik Harutyunyan.

According to the MP, such incidents were to be expected, as the citizen understands that he is becoming the guarantor of his and his family’s safety.

“Last year they created the cowardly image of an Armenian, but now the Armenian proves that he is not afraid and can stand up, intimidate and make the other person run away if he is not hindered by the treacherous authorities,” he said.

“An Armenian man who has dignity, was motivated by revenge, demanded compensation and threw a grenade at an Azerbaijani base under Armenian Shushi,” wrote Arthur Ghazinyan, a member of the “Hayastan” parliamentary faction, referring to the incident.

Border incident in the sovereign territory of Armenia

On November 16, at around 13:00, the units of the Azerbaijani Armed Forces launched another provocation in the direction of the eastern border of the Republic of Armenia, firing on the Armenian positions.

As a result of hostilities, which were later stopped with the mediation of the Russian side, the Armenian side had casualties and captives.

This incident became an occasion for statements by international organizations and various officials, in which they called for immediate de-escalation of the Armenian-Azerbaijani border and a complete ceasefire. Such statements were made by the OSCE Minsk Group Co-Chairs, the OSCE Chairman-in-Office Ann Linden, the President of the European Council Charles Michel, etc.

In contrast, there were also opinions according to which the unaddressed statements of the international community are also the reason for such provocations.

US Congressman Frank Pallone wrote on Twitter, “This increase in deadly violence against Armenia will continue unless the US Mission to the OSCE, the State Department and the international community take immediate and decisive diplomatic action.

The allegations that both sides are guilty ignore the fact that the Azerbaijani troops are attacking the sovereign territory of Armenia and intimidating the innocent inhabitants. “This is a deliberate violation of international law, which will only encourage Aliyev if he is not stopped.”

The same opinion was expressed by Foreign Minister Ararat Mirzoyan, “Azerbaijan’s behavior is a consequence of the fact that our international partners and the international community, in general, did not respond properly and purposefully to the use of force by Azerbaijan during the aggression against Nagorno Karabakh, which began on September 27 last year.

“Continuing statements of equality between the parties have been directly perceived by Azerbaijan as an incentive to continue this behavior.”

Referring to the incident, Security Council Secretary Armen Grigoryan said on Public TV that the state border of Armenia is a red line for Russia and against the background of Azerbaijani provocations and the recent escalation in the sovereign territory of Armenia, it is urgent to ask Moscow for help in resolving the situation.

“If there is no adequate action, Yerevan will have to turn to other international partners.”

He also added that Azerbaijan is trying to create an unstable situation in the region.

On the air of Channel 5, the NA deputy Anna Grigoryan tied the incident that took place at the border with the wish to open the corridor.

According to the MP, no matter how much the Armenian side talks about peace, it must understand who it is dealing with. “It is impossible to wait for the countries with belligerent statements to raise the same white flag.”

According to the newspaper, the war waged by Baku under the leadership of Moscow is aimed at “alienating” the Syunik region and closing the Artsakh issue in order to thwart attempts at settlement on international platforms and impose treaties on Armenia by opening corridors and controlling roads through Armenia.

“The main direction of the November 16 attack in Baku is the Sisian road leading to Nakhichevan.

After the installation of customs checkpoints on the Kapan-Goris road, our assertion that an attempt was made to open a road to Nakhichevan was later confirmed by an interview with the Secretary of the Security Council. It seemed to the insane authorities of the Republic of Armenia that everything would end with the Soviet maps and customs points.

Nakhichevan is not only a road issue but also a matter of maintaining the ontological agreement of 1921 for Moscow and Ankara.”

For the opposition, this incident was another reason to criticize the current authorities and demand their resignation.