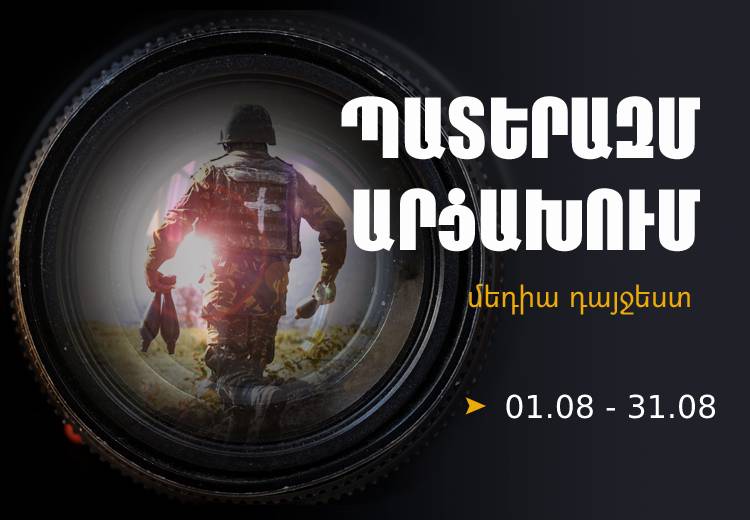 In August, one of the most discussed topics in the Armenian media again referred to border incidents, more specifically, the closure of the Goris-Kapan road by Azerbaijanis.

Especially as a result of the closure of the Goris-Kapan road, some villages were almost completely cut off from other settlements: Vorotan, Shurnukh, Bardzravan in Goris, a district of Nor Arajadzor village in Kapan.

On August 26, it was already reported that Azerbaijanis had closed the 18-kilometer section of the Kapan-Goris interstate road and refused to open it. This information came from former NA deputy Naira Zohrabyan, who said that there had been about 40 cars left in that section, 25 of which were cars with children in them.

The RA Human Rights Defender Arman Tatoyan also reported about the incident a little later, noting that the presence of Azerbaijani armed servicemen on the roads between the RA Syunik communities in itself violates people’s right to life, free movement and other internationally guaranteed vital rights.

According to Tatoyan, this is a pre-planned, open crime against the civilian population of Armenia.

In the morning, the National Security Service informed that the vehicles in the mentioned section had been evacuated. Work was underway to open the road and restore the normal movement of people and vehicles.

Those who raised a question about the incident at the NA sitting were from the opposition.

“Armenia” faction MP Anna Grigoryan made a reminder that this government signed a separate memorandum behind everyone’s backs and handed this interstate road, as well as the Kapan-Front road over to the enemy, saying that this was how they would ensure the security of Syunik.

“After all, were you able to ensure security in Syunik? You have been talking about peace for two days. Do you finally understand that they do not build peace like this? The defeated party cannot bring dignified peace, but only national humiliation,” said Anna Grigoryan.

Arthur Vanetsyan, the leader of the “I have honor” faction, urged Prime Minister Nikol Pashinyan to answer the question in his final speech, as to what document regulates the status of the Goris-Kapan interstate road.

“Our enemy country has closed an interstate road. And until this moment we do not know whether Syunik is cut off from the other regions of the Republic of Armenia or not.”

At the NA sitting, Prime Minister Nikol Pashinyan referred to the situation on the Goris-Kapan road. According to him, an attempt was being made to present that the RA government has done something behind the people’s backs.

“The following happened, in the parts that were outside the territory of Soviet Armenia according to the maps of the Soviet Union, the Azerbaijanis came to those places, closed them, citing that an incident took place last night whereby people entered from the Armenian side and stabbed an Azerbaijani border guard. We officially say that the information about the stabbing does not correspond to reality. … But what happened contradicts the agreement reached between Armenia and Russia, and that agreement was fixed. I repeat, no trilateral statement has been signed. That is the whole problem,” he said.

Is the area of the road Azerbaijani or not?

This question probably arose among the citizens who in those days followed the statements of some representatives of the ruling party, especially Nikol Pashinyan. The Prime Minister noted that “Azerbaijan has closed the main road leading to the southern parts of Syunik region in the areas of Eyvazli and Chaizam.”

Narek Ghahramanyan, a member of the “Civil Contract” faction, told reporters that the Azerbaijanis had closed a section of the road in “disputed territories” which, according to Soviet maps, belonged to them.

According to him, the incident cannot affect the security of Syunik. “If we build a 200-meter transit road, the problem will be solved. This incident should not be so complicated. Of course, it is an unpleasant incident,” Ghahramanyan noted.

Public TV also covered the topic, talking to the deputy governor of Syunik in Karmrakar.

“Lragir,” referring to Nikol Pashinyan’s statements, supposes that there is no trilateral document on that part of the road and that there is an RA-RF agreement, which has been violated.

“But let’s come to Russia because it turns out that Russia persuaded the RA Prime Minister to hand over those sections of the road to Baku, and according to that, Russia also had an agreement with Baku that the road should work. This means that Baku has either blocked the road according to the demands of Russia or has withdrawn from the agreement with it, thus putting into question the effectiveness of the Russian mediation mission and damaging its reputation,” the website writes.

According to an expert on Azerbaijani Studies, Armine Adibekyan, by closing the Goris-Kapan road, Azerbaijan is trying to get a corridor and gradually alienate Syunik from Armenia.

According to the expert, Armenia is not a party in the negotiations․ “Nobody considers Pashinyan a party with whom something can be negotiated, he has a function – to sign what was given against him. In other words, no one, not Aliyev, not Putin, not the Minsk Group, not even Turkey has a topic to negotiate with Pashinyan.”

During “Channel 5’s” program titled, “Kut shootings, the road opened in Syunik: The deputy sees a connection,” Tigran Abrahamyan says that it is still not clear as to what resulted in the opening of the road, it is not clear whether there has been a change in the rules of the game in terms of organizing the traffic.

Speaking about the public reaction to the incident during the same issue, MP Taguhi Tovmasyan said, “There is no freedom of opinion in Azerbaijan, the Armenians are the enemy there, Armenia is theirs and that’s it. Aliyev says that Armenia is not an independent country, and we do not oppose it. They come and say that the Goris-Kapan highway is mine, they close it, and we say, yes, they are Azerbaijani territories according to I do not know what Soviet maps.”

Analysts consider Pashinyan’s mention of the closed sections of the Goris-Kapan road according to Azerbaijani toponyms at the government session to be the official start of demilitarization and demarcation between Armenia and Azerbaijan. The closure of the road is widely an opportunity for the government to check the public mood.

“It was not accidental that Pashinyan used the Azerbaijani toponyms, it was a clear message.” This opinion was expressed by international expert Menua Soghomonyan during the program “Impulse.”

“The Prime Minister gave an ‘explanation’ when presenting the government’s program so that ‘we do not hinder the negotiation process.’ That is to say, so that Aliyev does not get angry. But on the day the program was adopted, Aliyev blocked the road.”

Another article mentions that Nikol Pashinyan carried out a kind of “demarcation,” calling Karmrakar and Shurnukh by Turkish place names.

“This approach of the Armenian side means that anyone can occupy the territory of Armenia, and the government will not do anything, because, according to him, the borders of Armenia are disputable almost across the entire line. This means that Armenia, by declaring that there is no border, opens its doors to all its neighbors.” 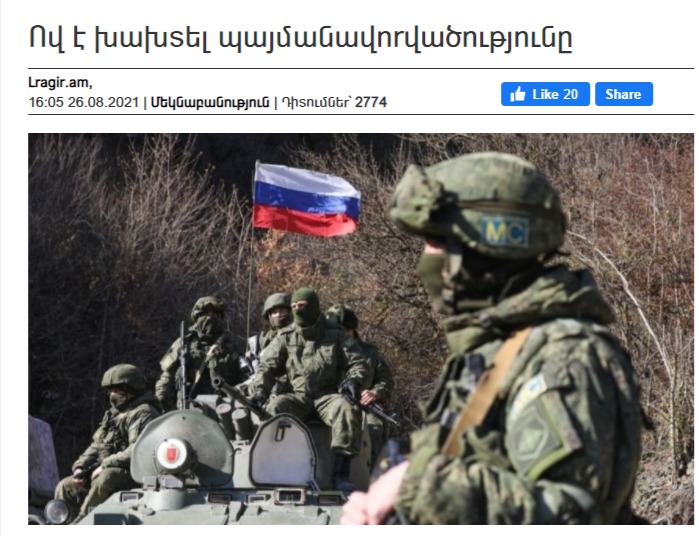 The website gives a reminder of Azerbaijan’s aspirations to acquire a corridor through Syunik and Russia’s role in it and also writes that Baku cannot reach the corridor on its own and that the Turks have always received Armenian territories from Russia.

“Russia, under the leadership of Baku’s invasions in Armenia, is forming its line of military presence or the ‘new Russian-Turkish border.’ In this case, within the framework of this plan, the plan to alienate the Syunik region through corridors and cut off Armenia from Iran is being implemented. The meaning of Russia’s ‘strange’ behavior is the following: if you want to ensure the smooth operation of the road, you must agree to the ‘corridor logic’ under the control of Russian forces.”

“Lragir” after all this assumes that the government has handed over the protection of the borders, the whole security system, and accordingly, has become Russia’s subject, regularly expressing allegiance to the Russian-Turkish “trilateral” package.

Thus, the main topics of August 2021 were the closure of the road in Syunik and the use of Azerbaijani place names by the RA Prime Minister.