The Armenian-Azerbaijani border incidents were again one of the occasions for an active media discussion in July. They had become more frequent since July 14, when a contracted soldier received a fatal gunshot wound as a result of a provocation carried out by the Azerbaijani armed forces in the Yeraskh area.

This was followed by other incidents both in the Yeraskh area and in the Gegharkunik region. The head of the community was also injured in Yeraskh.

Tensions in the Yeraskh area continued until the end of July. Some media correspondents visited Yeraskh, and some of them covered the topic only with official news and expert comments.

The people of Yeraskh are not preparing to leave

Despite the border tensions, the residents of Yeraskh do not panic and continue to live their normal lives. This was present in all the media reports made on the spot.

In one of the reports, Armen, a resident of Yeraskh, says that he was burying a fellow villager when the enemy started firing. According to him, wherever you stand in the village, you are under enemy fire. The whole of Yeraskh is in the hands of the Azerbaijanis. Armen will not say farewell to his weapon as long as the enemy tries to make advancements every day.

“Everyone in the whole village has several children. Now, God forbid, if the Turks enter, do I have to wait and say, no order has been issued, let them come and massacre us? I will not wait for an order, I will hold my border.”

The residents say that they will not give up even one centimeter, otherwise they will not be able to control the enemy’s appetite.

“They see the flag, they say it is our land, but it is not their land, all of Nakhichevan is our land,” said Khachik Vardanyan, a child of the first Artsakh war.

He says that even now, if necessary, he is ready to stand by the soldiers. “Peace is not possible. It will never be. Who should we give it to? The Turks? There were so many massacred in Karabakh, now they want Yeraskh? We have nothing to give to the Turks.”

“Every minute you wait for the village to be fired upon. The Turks cannot be trusted. Now they aren’t opening fire, but they can start opening fire in a couple of hours,” said the other.

The captain of the Mesropyans’ house, Sos, says that with those shots the enemy wants to take a new position. “According to them, they have defeated Armenia, they are dictating now, they want to advance whatever it is they say, but it will not pass. Our boys are standing, they will not give an inch of land from Yeraskh.”

All the experts who were the guests of the media claim that with such incidents, Azerbaijan tries and will continue to try to put pressure on Armenia.

Baku is putting psychological pressure on Yerevan to forget about Artsakh and quickly agree to new concessions. Economist, management expert Karen Sargsyan says that the stage was moved from Artsakh to Armenia.

According to him, Azerbaijan, by exerting pressure in Ararat, is trying to solve the issue of the corridor it wants in Syunik.

“Baku’s bellicose rhetoric is not only not easing up but is often accompanied by border incidents. Experts believe that with such steps, Azerbaijan is trying to achieve a reality whereby Armenia will renounce Artsakh, while the Armenian side continues to declare that there can be no peace agreement until Azerbaijan fulfills its obligations,” he said.

The second president of Armenia Robert Kocharyan does not rule out that the border tension with Yeraskh is to prepare the Armenian society for the signing of a big peace agreement with Azerbaijan.

“It may be the following: After such provocations, a situation is created that the danger of a new war becomes visible for the people, and the people easily digest the signing of another document, the concession. The signing of such a document will be accepted not as a betrayal, but as salvation,” said Robert Kocharyan.

The former head of the Hayastan All-Armenian Fund Ara Vardanyan is of the same opinion. “Today they are threatening us again with a possible war, I think there will be no war because today there is a man in power in Armenia who is ready to give everything up.” 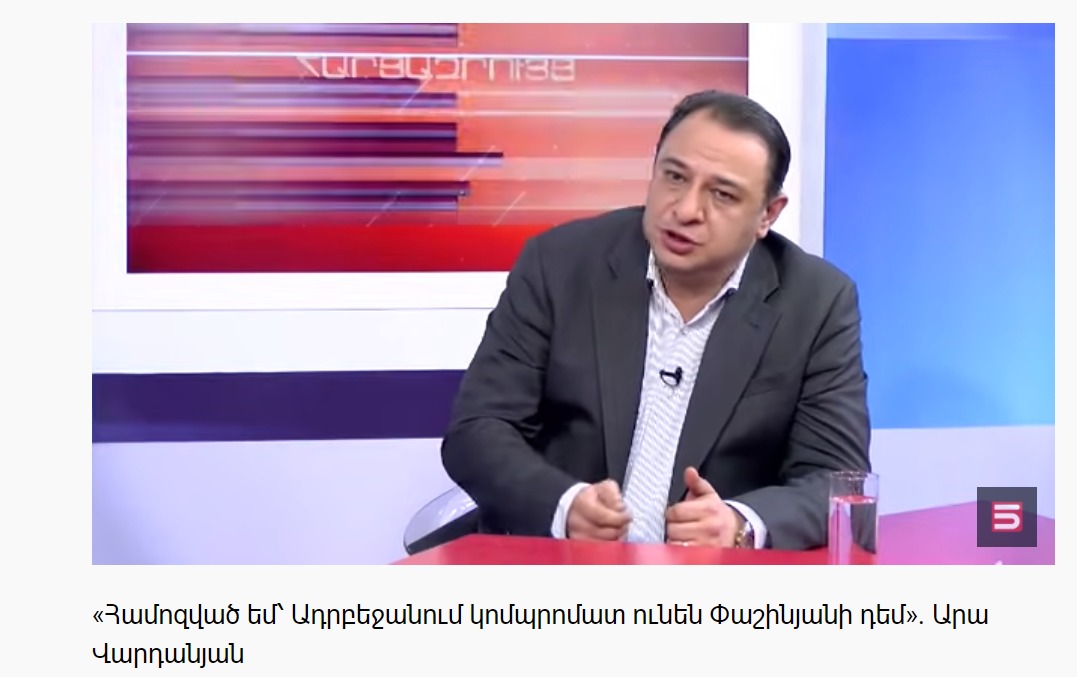 According to an expert on Azerbaijan studies, Taron Hovhannisyan, the positions expressed by the international players, the Minsk Group and Russia are very important,  because Azerbaijan may not be limited by that act of aggression. Azerbaijan’s tactics imply a constantly aggressive policy on all fronts and places, through which they also try to put pressure on Armenia, forcing it to make new concessions.

Military commentator Karen Hovhannisyan thinks that the choice of the scene of the incident is not accidental, due to the fact that this is the part of the Armenian-Azerbaijani border closest to Yerevan.

He is sure that such local actions will sooner or later lead to a large-scale conflict. “At the moment, the enemy’s goal is one – to launch certain episodic hostilities to corner the Armenian government in the possible negotiation process, to be able to extort something in its favor.”

The author of “Lragir.am” Naira Hayrumyan writes that the provocations of Baku and Moscow are aimed not only at forcing agreements on Armenia.

“Aliyev is carrying out his threats. An armed incident took place in the Yeraskh area, 60 km away from Yerevan, during which an Armenian soldier was killed. Judging by the statement of the Armenian Ministry of Defense, Baku troops tried to advance their positions in the direction of Yeraskh. According to some sources, it happened in the Tigranashen area, and if Baku manages to establish control over the road, “barters” will start over the “Meghri Corridor” issue.

In another article, the author writes that Baku is aggravating the situation, while the international community insists on the need to return to the Minsk process within the OSCE.

“Yerevan and Baku, which have tried to fit comfortably into the Russian-Turkish scheme, will have to make a ‘painful choice.’ After a ‘victory’ at the cost of tens of thousands of victims, Aliyev must decide on either a new war or the Minsk process. And Pashinyan must choose between ‘Russian guarantees’ and a legitimate international security system.”

In the article titled, “Why was Yeraskh targeted? Moscow and Baku are preparing a new blow against Armenia,” the author notes that the pressure on Armenia is increasing both in the form of propaganda and via Moscow’s proxy tool, Baku’s attacks.

Moscow is drawing the “new border” between Russia and Turkey along the Khoznavar-Sotk line, which is the front line of its military presence and which should ensure Russia’s relatively safe retreat from the region. 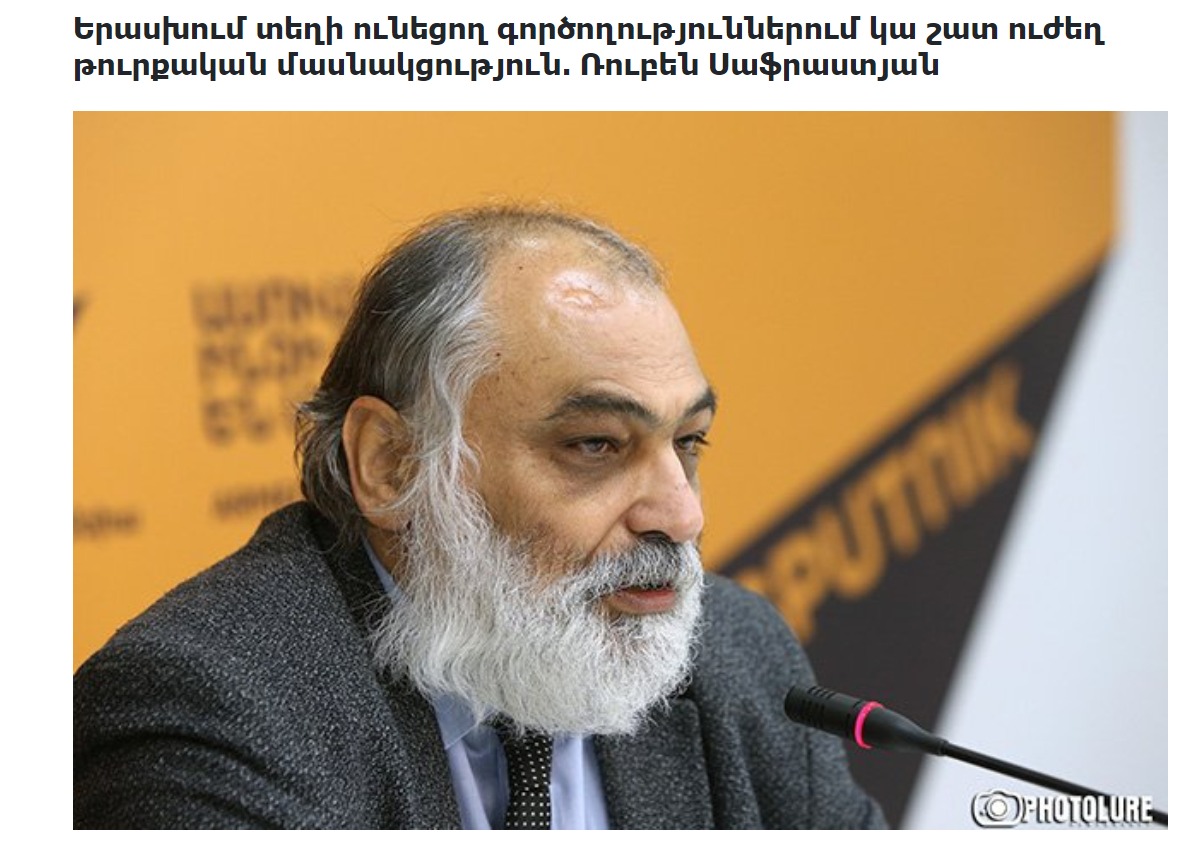 In a conversation with 168.am, the director of the Institute of Oriental Studies, Turkologist Ruben Safrastyan noted that today we are dealing with a Turkish-Azerbaijani tandem. It is clear from the Shushi declaration and it seems that the two countries have started a process aimed at creating a federal state.

“So, that which is taking place now on our border with Nakhichevan, in Yeraskh, I am convinced, in fact, that there is a very strong Turkish participation.”

Yeraskh cases and criticism of the authorities

The statement of the “I have honor” bloc expresses, “The situation around Yeraskh is the first, and unfortunately not the last, post-election price to be paid for the reproduction of infertile authorities. Such cases will be continuous and will affect the entire length of the Armenian-Azerbaijani border, as well as the cut lines of Artsakh.”

168.am quotes Turkologist Varuzhan Geghamyan as saying in his Telegram channel that Yeraskh is not an accidental place, it is in many respects one of the most strategic points in Armenia, the ruling force of which can dictate not only in the direction of Nakhichevan but also in the whole South Caucasus.

“This threatening situation would not have happened if the Armenian leadership had spent time and effort to unite its resources with the states that oppose Turkey’s expansionist programs, becoming a member of the anti-Turkish alliance in the region. …Instead, the capitulation and de facto pro-Turkish government of Armenia threatened and continues to threaten its own citizens, not the enemy.”

In the program “Pressing,” the former Deputy Minister of Defense of the Republic of Armenia Artak Zakaryan noted, “The Republic of Armenia will become play dough in the South Caucasus, from which they will transform and alter as much as they want, making it completely submissive. Today it is Yeraskh, yesterday it was Kut, before that there were a number of villages in Gegharkunik, Tavush, Syunik… this process will continue until the Armenian people say to the capitulator, well, we’re sick and tired of it, go and demarcate and delimit.”

Political scientist Gagik Hambaryan writes, “As a result of the ‘Yeraskh-show’ of the Aliyev-Nikol tandem, Tigranashen and the territories of Tavush region will pass to Baku. Nikol the Landless will present these territories to Ilham on a tray, and the Russians will deploy their troops as peacekeepers in those parts of the Armenian-Azerbaijani border, which will announce the de facto death of the third republic of Armenia, which will soon be followed by de jure death.”