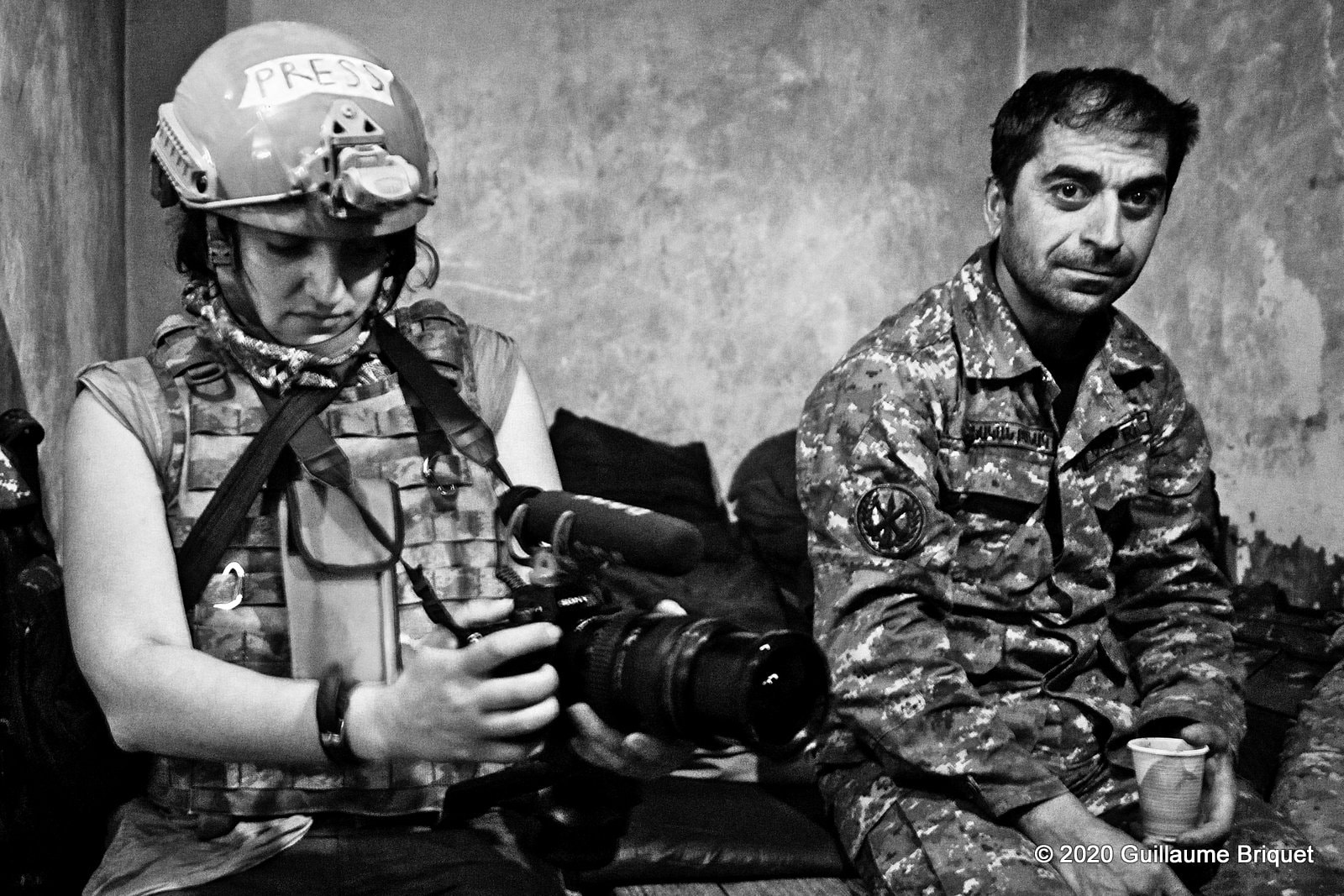 I woke up, there was a war on Facebook. That same Facebook reminded me that it was my girlfriend’s birthday: I called.

We went to war in a white, freshly washed car, in the most ordinary shirt.

COVID continued in the world. According to the law of Artsakh and the unwritten law of war, we were both without a mask and without a helmet.

Since there was still COVID in the world, international journalists had not reached Artsakh yet. The world needed shots of real bombs already, a destroyed building, an explosion.

The projectile of Stepanakert was already shot from 10 angles and with all the details and wide lenses. The international media wrote that they also want military personnel from me. I went to Hadrut again without a “helmet” and without a “mask.”

They hit, the cameraman of “Shant” TV company said.

On the 5th day of the war, I only just understood, I wrote to my Diaspora friends:

– Guys, can you buy me a bulletproof vest and a helmet, at least it will protect me from shrapnel.

The internationals started saying that I should shoot the shots of the explosion statically, at that moment I realized that I only want to make a movie.

The war was for me the people of the shelter, who had already become my friends and relying on my friend to sleep:

– Rafo, you remember my room number right? If the siren goes off, let me know.

The war for me was a call from Yerevan:

– What should I bring?

It was the “kinder surprise” I bought for my friend’s birthday from the only open store. The war was for me to look at each other after looking at an exploded building․

– Whose house was it near?

– Grish’s, but they are fine, they were in the shelter across the street.

The war was the hope that the missiles would hit “our guys” a little less, and that it would be possible to see stars at night.

I wasn’t a war journalist, and I didn’t become one.

In Martuni. We were not ready: me neither

A week after the war we could differentiate at least:

– It’s with mortar, so how many kilometers away are they?

I had already heard a lot in the distance, I heard it nearby in Martuni.

6 meters away the shelling hit us: The statue of Avo shielded me.

It hit us close, but this time the sound of the projectile reached France, “French President Emanuel Macron has stated that everything is being done to evacuate the wounded journalists from Karabakh in the Artsakh city of Martuni as soon as possible.”

The wounded French journalists were taken to the hospital by photographer Areg, documentary filmmaker Khane, our friend Sevak.

We were not very aware of these names. Several Armenian journalists and cameramen who were with us were also injured.

One name remained in the shadows: Grisha, a young man from the village who had accompanied the group. Later, my friends and I would digest this news for a long time.

About three hours after the bombing, I thought maybe it’s a good thing that the locals were not the only ones being injured…

Anyway, at that moment, tightly gripping a cross in one hand, piece of shrapnel in the other, I was thinking․․․

The colors of the war condensed.

There was no logic: War was already everywhere.

The villain in the war soon became the person with the camera, especially women who were not many in the war, and a woman with a camera was even more suspicious.

– You’ll “give away” the positions.

– It’s dangerous, what business does a woman have over there…?

Apart from the rules of martial law, my words were undesirable on social networks, my presence was almost everywhere…

“We will win” was designed as a revelation that falls on our heads, and the official news, the only holy thing.

And so many things were left out of the margins.

There was a time when bombs and collapsed buildings were being filmed and not a single wounded civilian or soldier. And that was an omission, and it was the omission of the non-reporters.

But I adapted to the situation and found the magic words, which were also the reality:

I did not share the information I saw during my work. As a result, euphoria became as dangerous as panic. After the war, when I felt guilty that I had not at least reported my part as a “witness” of the war situation in general terms, I decided that I should start saying it, and after that only the news knows what life it will live, how it will affect, or will not affect, and what other news will join…

Along with the denial, in reality, there were burning houses, shared pomegranate orchards, lost people… there were lives and destinies that we could only document and tell through the eyes of an eyewitness.