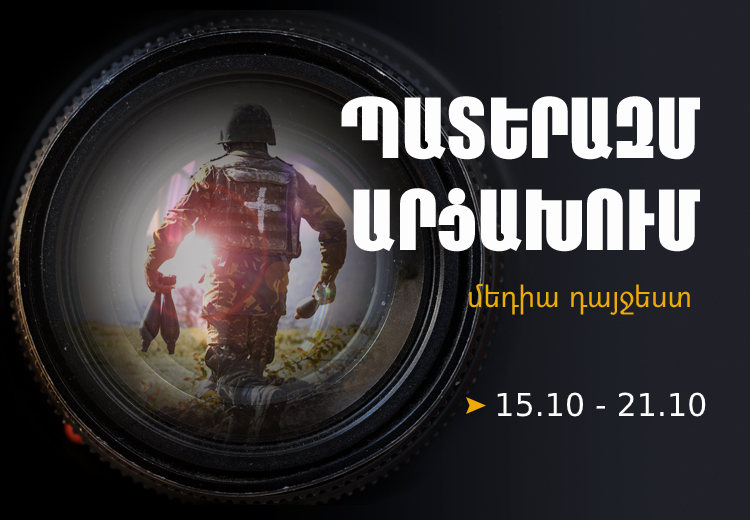 In the second half of October, the Artsakh war and further developments continued to be the most discussed topics in the Armenian media.

Media.am has already referred to the first ten days of the war, then to the first ceasefire announced through Russia. This time we will refer to the second humanitarian ceasefire, which was initiated by the other co-chair country of the OSCE Minsk Group, France.

On October 17, it was announced that a humanitarian ceasefire would be established on October 18, at 00:00 local time. If the first ceasefire lasted 5 minutes, the duration of this one was shorter – 4 minutes. 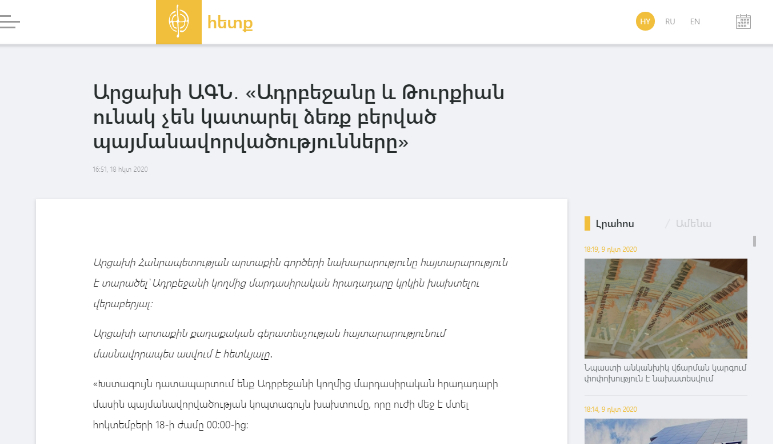 The Ministry of Foreign Affairs of the Artsakh Republic also mentioned this in its statement, adding, “Once again, Azerbaijan and Turkey have shown that they continue to view  the humanitarian ceasefire agreements, and negotiations in general, in the context of a military solution to the conflict.”

A statement issued by the Armenian Foreign Ministry stressed that “the ceasefire must be stable and verifiable.”

During their news broadcast, Channel 5 reported that Azerbaijan is trying to seize or dismantle the Khudaferin reservoir in the Araks Valley, which, according to Iranian experts, is “so important to Iran that Tehran may face a direct confrontation with Ankara. Or maybe they will just sell weapons to Armenia.”

According to Artsakh political scientist Alexander Kananyan, the ceasefire is conditional, it is not accidental that the adjective humanitarian is attached to it. “I do not think that Azerbaijan will maintain any ceasefire. Azerbaijan will continue the genocidal aggressive war against Armenia. In a sense, we will have local ceasefires for 1-2 days when Azerbaijan is finally exhausted and begins to retreat along the entire front. But in general, it will be possible to talk about a final or years-long ceasefire not only due to the restoration of the current pre-war line of contact but also after causing serious territorial losses to Azerbaijan, otherwise, we will be in that bloody cycle.” 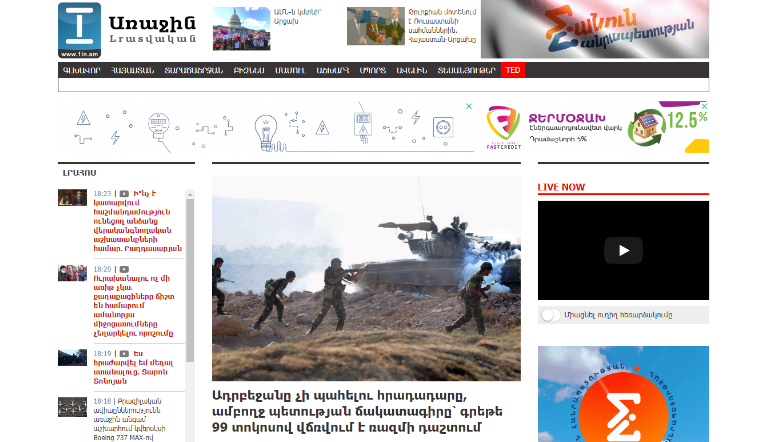 The ceasefire, according to an anonymous unsigned article by Lragir.am, was imposed on Baku, “The point is that Baku had no reason to stop the war because of its declared goals and Turkey’s policy. It is not for nothing that the Baku Foreign Ministry spokesman told the Turkish media that the ceasefire should not be interpreted as a cessation of land liberation. In its turn, Turkey seeks to participate in the settlement in one way or another, at least in the Moscow document it was rejected. Has Turkey been ‘persuaded’ by the Turkey-Iran-Russia initiative to increase the Minsk Group, which was announced by the Iranian Foreign Minister in a telephone conversation with his Azerbaijani counterpart, and Baku with Lavrov’s plan?”

In an article by Hakob Badalyan, a journalist of the website, Badalyan states that the reason for not observing the ceasefire announced for the second time is not Azerbaijan, but the fact that Turkey does not allow it, which, according to the author, speaks about the collapse of the Azerbaijani state.

The issue of the ceasefire in the UN

The issue of the need to ensure control over the ceasefire regime in Nagorno Karabakh was also discussed at the UN Security Council. “Haykakan Zhamanak” published the comment of the Russian Permanent Representative to the UN Vasily Nebenzia to journalists.

“It is necessary to implement the ceasefire now, this is the most urgent issue because an agreement has been reached, but it has not been respected,” he said, adding that the main question remains how to ensure control over its implementation.

At the same time, he explained that sending a UN observer mission to the region “will require a special mandate from the Security Council, because it is not a quick process.”

Removal of prisoners, detainees and bodies was not possible

Violations of the twice-declared humanitarian ceasefire to remove the dead and wounded from the battlefield raised some issues that received a response in the Armenian media.

“There are opinions that it is not in the interest of Azerbaijani President Aliyev to evacuate the bodies of his own people, as he has to answer to his people for the large losses, which he cannot, that is why he hinders the possibility of humanitarian work,” Haykakan Zhamanak wrote. He spoke with Zara Amatuni, head of communication and prevention programs at the Armenian Red Cross office.

She said that they are ready to fulfill the humanitarian task, but “the only circumstance is that the parties involved must maintain the ceasefire so that our teams, if it comes to the withdrawal of wounded soldiers, will be safe for them, from beginning to end.”

Channel 5 also touched upon the topic, “The aggression unleashed by Turkey and Azerbaijan against Artsakh no longer recognizes borders and is dangerous for the whole region. The ombudsman of Armenia stated that Baku and Ankara, which violate all the norms of international humanitarian law, do not allow the bodies of the victims and the wounded to be taken out of the battlefield for 22 days. The result may be an epidemic.”

According to Artsakh Republic Human Rights Defender Artak Beglaryan, Azerbaijan, once again violating the humanitarian ceasefire agreement, reaffirms that human lives and the bodies of its servicemen are of no value to it. “How will we respond to this new violation of the humanitarian ceasefire by Azerbaijan? It seems that this country does not care about human lives, the bodies of servicemen,” Beglaryan said on social media, using hashtags urging not to be blind and to recognize Artsakh’s independence. 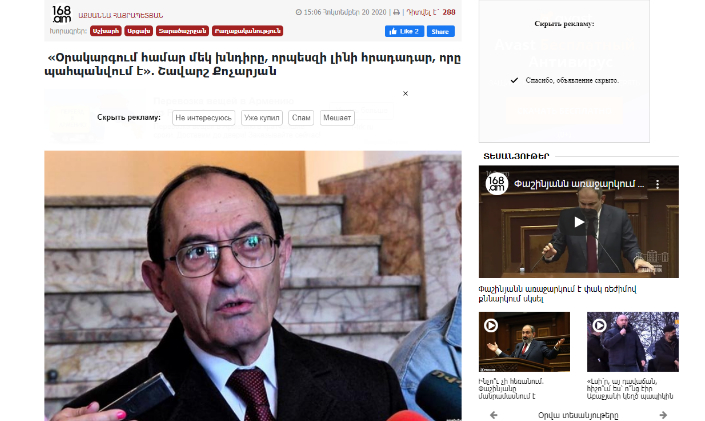 It is the United States’ turn to mediate the ceasefire

Shortly after the second humanitarian ceasefire, the media wrote about the third attempt, this time the initiative of the other co-chairing country, the United States.

In the article entitled “Baku did not listen to Lavrov and Shoigu, will it listen to Pompeo?” the author of the article raised the question, “Will they listen to Pompeo, who has been active in announcing the war since October 12, talking about Turkey’s participation, saying that they urge not to do so, expressing hope that the Armenians will be able to defend themselves from Azeri attacks until the parties negotiate?”

Hetq, in turn, published a letter from Fulbright International Scholars to US Secretary of State Michael Pompeo, urging the US Government, as a member of the UN Security Council and as the OSCE Minsk Group Co-Chair, to ensure the realization of the right of the people of Karabakh to peace, taking immediate steps to monitor the implementation of the ceasefire agreement, introducing international mechanisms for investigating incidents, etc.

168.am, referring to “Voice of America,” noted that separate meetings of the US Secretary of State with the Foreign Ministers of Armenia and Azerbaijan are planned. The main topic of discussion is the situation around the Nagorno-Karabakh conflict.

The media also actively covered the reactions of Azerbaijan to the violations of the new humanitarian ceasefire in the international media.

As reported by Armenpress, the authoritative BBC wrote in particular that Armenia accuses Azerbaijan of violating the new ceasefire just minutes after the agreement enters into force. It is noted that Azerbaijan has yet to respond to the accusations.

Almost all authoritative Russian media outlets wrote about the ceasefire violation by Azerbaijan. “Iravunk” newspaper, 1in.am, Lragir published about it.