“Journalists experience psychological trauma not only in conflict zones” 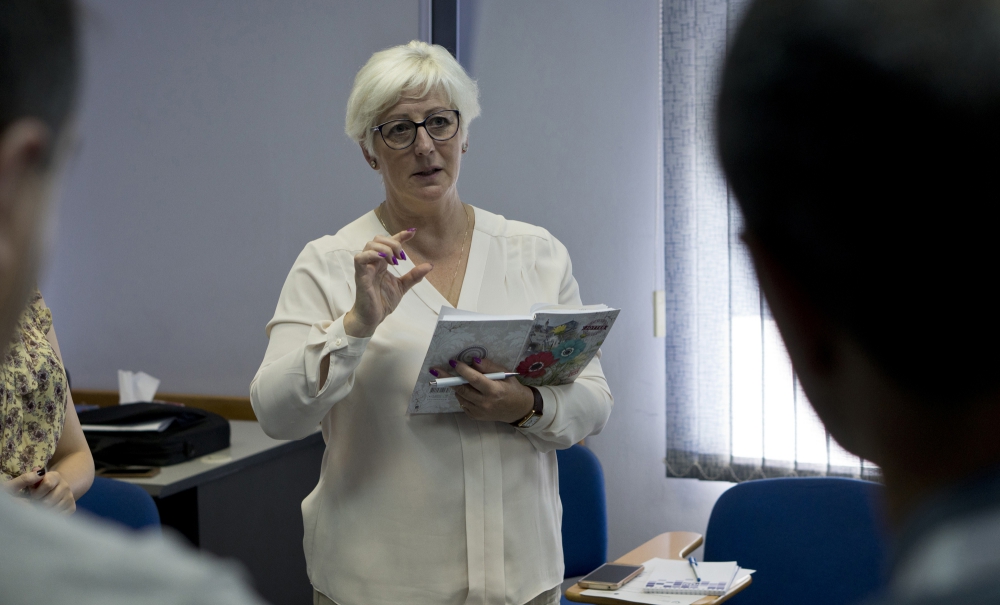 “Unlike stress, trauma is accumulative. Stress can be both positive and negative, but trauma is only negative. In the absence of a protective wall and of self-care [in a person], trauma makes itself known  one day, much like a broken leg or hand,” says Angelina Fusco, a former editor at the BBC with 30 years of experience who now works at the Dart Center for Journalism and Trauma, dealing with issues of trauma affecting journalists.

In the media industry, going to a psychologist is a difficult endeavor in not only Armenia, but also the world: journalists and photographers seek the help of experts only when push comes to shove, when they are on the verge of emotional exhaustion.

“That journalists don’t seek the help of a psychologist is a fact not only in Armenia — international experience proves this. This is a hidden problem. People don’t want to go to a psychologist because they think they’ll be seen as a weak person, but that’s not true. You must go; otherwise, trauma will make itself known one day,” she says.

Fusco notes that journalism is itself a traumatic profession and often, lifting professional “boulders,” journalists subject themselves to trauma, an experience that cannot be avoided.

“Sometimes journalists don’t believe this, but when there’s an emergency situation, until the rescuers and paramedics come to the aid, journalists are already there, witnessing many traumatic situations. In general, various information is available to those who provide assistance services, how to get out of a variety of traumatic situations. But when it’s journalists’ turn, they say, ‘Go get drunk or have a smoke; it will pass.’ I believe that, in any case, you need to seek the help of an expert,” she says.

Considering that journalists work with different vulnerable groups, Fusco believes that journalists must first of all know what trauma is. And not only for them, but also to be able to be more ethically correct when working and interacting with these groups.

“And no matter how compassionate you are, we have to build a protective wall for ourselves and keep a certain distance, which will protect us a little from the anticipated trauma. But this isn’t usually discussed in newsrooms. It took a really long time until the media industry realized that issues related to trauma must be discussed, and I think that the people in charge must take the appropriate steps. The good news is that journalists are quite robust. That’s all.”

According to Fusco, if the trauma lasts more than a few days and continues for months, then you should seek help from your colleagues or go see a psychologist, to relieve yourself of this burden.

She remarks that journalists are often physically protected when they are sent to cover conflict.

Journalists wear protective gear and helmets, but never taken into account is the fact that besides physical safety, there’s also the matter of psychological safety.

“In that sense, our center does an enormous amount of work. We try to explain to journalists so that they recognize what trauma is, how to overcome it, and how to be protected. I work at this center as a junior researcher and trainer; we have a fantastic website where journalists share their experiences, and this is an excellent source for information,” she says.

She reminds us that addressing the trauma not only protects the journalist.

“If a journalist cares about herself and is engaged in self-care, journalism also wins. And in this case, the journalist’s work becomes more effective.”

According to Fusco, there are a few exercises — breathing, safe space visualization, not wasting accumulated energy, muscle relaxation, focusing attention, and self-control — that help to shed the trauma and experience relief.

“Journalists are subjected to trauma working not only in conflict zones or during a natural disaster, but also each workday, if we consider what happens in our surroundings: road accidents, socially vulnerable families, children on the street… All this is traumatic. Very often you don’t even have to see a psychologist, but you can overcome the problem by talking, sharing with your colleagues. Otherwise, an untreated trauma eventually delivers its message.”

Fusco has worked in such conflict zones as Northern Ireland.

“For 30–40 years, this country has been considered a conflict zone, and I worked there during that period. From 1968 till now, true, there’s peace, but lasting peace hasn’t been established. There have been many bombing and killings during this time. I’ve worked with journalists who covered hostilities in Syria, Afghanistan, and Iraq. My advice to everyone is to same: besides protecting yourself physically, be prepared to protect also your psychological world,” she says.

She gives the same professional advice also to journalists working on the Line of Contact between Karabakh and Azerbaijan: before reaching the border, be mentally prepared.

“Alongside the coverage, try to manage the trauma and lower your stress level. If you don’t do that, it will definitely have an effect on both your work and your family. Of course, it’s not possible to manage such that you don’t feel trauma at all, but you can at least reduce its impact, to avoid future complications. The only way out is to be able to control and manage the trauma,” she says.

Upon the invitation of the Media Initiatives Center [also responsible for this site], Fusco conducted a training session on overcoming psychological trauma for journalists, camera operators, and photographers working in Armenia and Artsakh.