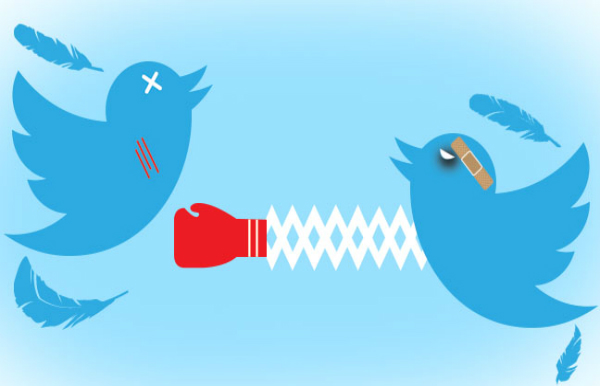 Azerbaijani residents Dilham Askerov and Shahbaz Guliyev, accused of illegally crossing the Karabakh-Azerbaijan border on June 29, 2014, and killing a civilian and an Armenian soldier, stood before a Karabakh court in the fall of 2014. The group’s third member, Hasan Hasanov, was killed as a result of armed resistance.

There was a strong reaction to the trial also on social media. Twitter users supporting the detainees adopted the hashtag #saveazehostages, thus trying to present the men as hostages. The hashtag was immediately used and shared by quite a number of presumably Azeri users.

Twitter’s presumably Armenian users, in turn, widely circulated the hashtag #azesaboteurs. Thus, Twitter coverage of the trial led to a battle of hashtags between online users of the two countries. 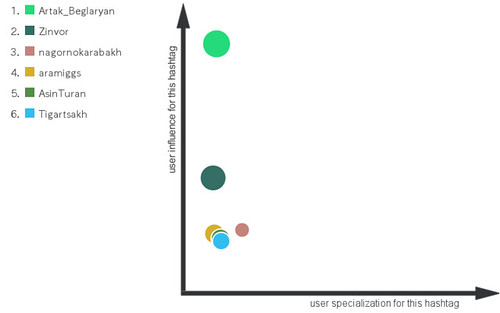 The most active users of the hashtag #azesaboteurs

The Azerbaijani side attempted to take over the #azesaboteurs hashtag but failed. 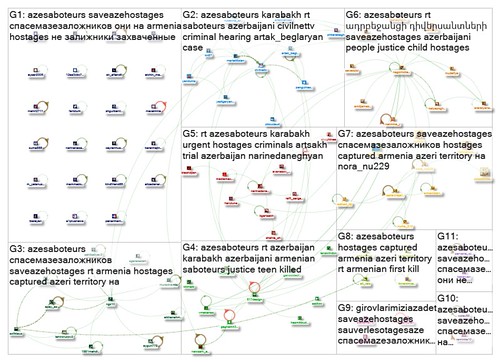 As seen in the graph below, at the center of the #saveazehostages tweets is the official account of the youth wing of the ruling New Azerbaijan party. 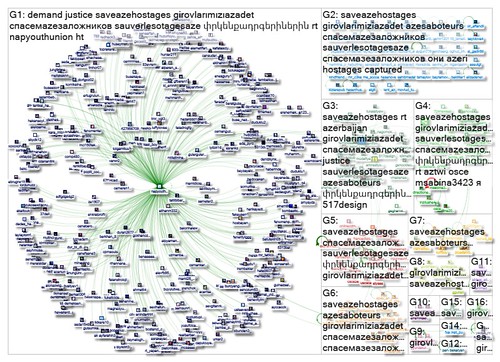 Furthermore, Pearce ascertained that the most active accounts using this hashtag joined Twitter in August 2014.

Through Startahashtag.com, it became clear that the first tweet using the #saveazehostages hashtag was sent by @SenanNajafov on October 21, 2014. This account belongs to Senan Najafov, representative of The Council of State Support to Non-Governmental Organizations under the President of the Republic of Azerbaijan and editor of the organization’s official website. 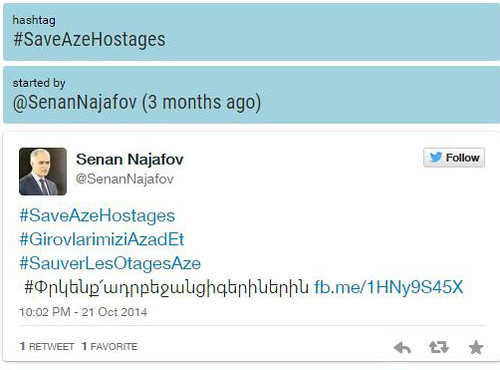 This was not the first Twitter campaign Azerbaijani authorities organized. A similar and more large-scale campaign was attempted by the IRELI youth organization to take over the hashtag #armvote13, which online users adopted to share information related to Armenia’s 2013 presidential election.

After the last court session in the case of the two Azerbaijani men in Stepanakert at the end of 2014, the conflict again escalated.

On December 29, 2014, Askerov was given a life sentence, while Quliyev was sentenced to 22 years in prison.

As seen from this graph from Topsy, though the #azesaboteurs hashtag has been relatively inactive this past month, it has a tendency to become active and most likely, the hashtag battle will continue in the near future.