“The Patriot Conquers the Journalist” 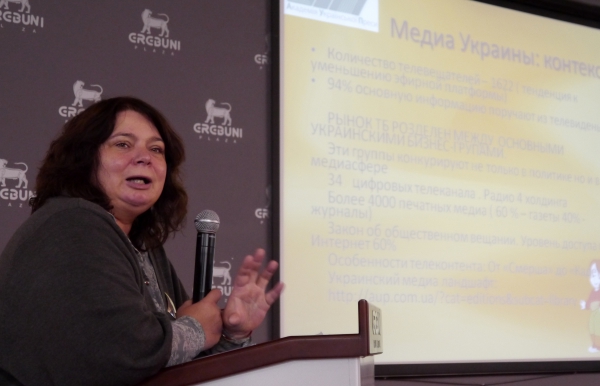 In the opinion of Academy of Ukrainian Press Executive Director Oksana Voloshenyuk, military operations between Russia and Ukraine, which also took place in the media, put forward the notion of “dedicated journalism”.

She remarks that it’s quite difficult to give advice to journalists working in Ukraine’s regions where hostilities have erupted. In general now, there are more questions than possible answers.

How would you describe the media conflict that occurred between Ukraine and Russia?

It seems as though the two types of journalism collided. Ukrainian journalism today is losing to Russian [journalism] in terms of its mobility, being in the conflict zone, and generally the amount of media broadcasting information. Russian journalism immediately and completely moved on to propaganda; that is, an intentional and massive attack. Pay attention: 9 out of 10 Russian news reports nowadays are about Ukraine. Even jokes heard on comedy programs refer to Ukraine.

Ukrainian journalism, on the other hand, took a somewhat different path. We call it “dedicated journalism” — with this term trying to describe war, conflict zone journalism, when a journalist is more of a patriot than a journalist.

Do you consider such journalism natural?

Of course it’s unnatural. But from the perspective of our highly polarized society, another position is not acceptable.

How would you suggest news outlets protect themselves from fake information?

There’s only one way: use verified sources. For example, I trust only my personal sources and, as much as possible, I rely less on information from social networking sites. Even the media is not reliable. In a recent survey, it turned out that [public] trust in the media in Ukraine has decreased drastically — a record 26%.

It’s sad, but in Ukraine, there are few professional journalists who are at the conflict zone. Ukrainians reporting information often becomes weird and funny: our journalists take the Russian media’s information and prepare reports by turning it upside down. They clean it of propaganda and make it patriotic, so to speak.

Why don’t they try to gather information first-hand?

The situation is very complicated. I too have more questions than answers.

Recently, a young person shot a documentary film that had shocking images of how children living in these so-called separatist regions were mimicking the behavior of their fathers standing at the guard posts. In the past, children imagined themselves to be Robin Hood, and now, separatist. That is to say, they glorify separatists and want to be like them. Seeing that, you understand that this conflict has left a profound psychological mark, which will take years to get rid of.

Honestly, in this situation I myself don’t know how a journalist should work. Perhaps there’s a need to undo the legitimacy of corruption.

I have a neighbor whose very studious daughter could’ve easily been accepted into university, but her father not only paid a bribe, but also proudly declared this everywhere. Do you understand, we were witness to such perversion even at the micro level. Let’s put aside politics — but what should we do about public consciousness?

Thank god that that’s slowly changing. People no longer stand alert and obedient at intersections for half an hour, until the presidential motorcade passes; intellectuals evaluate themselves completely differently now; and, after all, the media tries to work differently.

Now’s the time to wait. Logically, without panic. Probably, waiting is the best way to fight. There are moments when it has to be bad till the end, so that changes occur and people who reject the corrupt Soviet life appear.

Were the results of the parliamentary elections satisfactory?

The institute of elections doesn’t inspire confidence, as it’s become like a structure that rents positions for some time. You know, something very interesting happened: our best opposition journalists found themselves in parliament.

Our leading political journalists (if I’m not mistaken, 14 of them), who inspired and participated in the revolution, became members of parliament. They assure [us] that they are becoming part of the ruling authorities in order to oversee them. But you can’t oversee and be a part of something at the same time.

By the way, the head of the Ukrainian Lustration Committee is likewise a former journalist and likewise opposition. For me, it’s unacceptable when a journalist seeks power.

Unfortunately, the media not only shows examples of dedication, but also becomes like surfing.

That is, it moves forward by rollicking over the waves and riding on the surface; it doesn’t try to give meaning to the underlying processes and understand ultimately how did it happen that a brother came out against a brother?

The quality and depth of news pieces and being ready to dive into the issues, of course, are not enough.

It’s obvious why Russian channels are losing trust, but the same is happening also in Ukraine. Actually, the media doesn’t want to meet public demands; it seems as if it has its own behavior. And what is created is a situation where the patriot conquers the journalist. Or the desire to run after all opportunities for information conquers professionalism.

You’re also a member of the censorship committee. How do you work?

This committee, which was created adjacent to state television, was operating for a long time, but it has now expanded its team, involving various non-government organizations. We analyze television and film productions, giving box office licenses. Considering the information war between Ukraine and Russia, we also review the licenses of Russian films and TV series shot 10 years ago. We monitor so that no films with anti-Ukrainian content are shown.

Are there a lot of productions that are banned?

We banned about 20 TV series. We discovered, for example, that 70% of TV series filmed in Ukraine that were commissioned by Russia have anti-national content. Banned are films where the issue of national territories is not presented accurately, historical facts are distorted, and the Caucasian War and the role of the special detachments are presented under a poetic gaze.

In Russian productions, we sometimes come across scenes that are simply intolerable; for example, one TV series depicts starving Khokhols [pejorative term for ethnic Ukrainians] wearing tattered clothes, who practically do slave work for Russians in exchange for a plate of food.

Don’t you think that such thorough censorship is like a double-edged sword? After all, we seek to know the truth by seeing an obvious fabrication.

I agree, most of the audience understands everything. But there are instances when we come across not fabrication but an overt insult. Banned, for example, was the successful film “Match” (about a football team), which contained not only a historical lie, but also primitive caricatures of Ukrainians.

Considering that the not yet formed young generation also watches TV shows and films, we are forced to take action — especially since we see very well that there are people in Russia shaped by primitive TV shows (90% support of Putin is not a joke).

For four years, 30% of Ukrainian news broadcasts were reports referring to law enforcement authorities. Thus, one gets the idea that the public is governed by a strong arm. The man with a gun becomes a hero.

Television is like a pile of grains of sand. Day by day, granule by granule, subconsciously perceived images are broadcast, convincing us that our brains are overrun with chaos and only a man or woman with a gun can establish law and order.