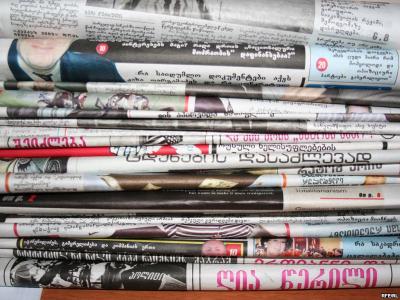 In 1990s, internal civil confrontation, as well as the loss of Abkhazia and South Ossetia, and the war of 2008, has created a state with 6% of its population being refugees. Having lost their native residence they escaped looking for shelter to save their lives. They’re the victims of an armed conflict. Those sufferers represent a subject of interest for the media. However, it’s a situation where I have to say a trivial phrase – “quality excels quantity”. For it’s far more important the way “how” does the Georgian media cover their issues, as opposed to the frequency of such coverage. Similar to the case with the coverage of other issues, the media is also polarized and radical with respect to this concrete subject, and has its own position, preferences and criticism.

Media outlets providing substantial coverage of the refugees’ issues are internet publications such as “Monitor” and “Studio re”.  In other instances, the media shows only fragmentary interest in refugees, or does it in context with other events. Last time that kind of “boom” followed the deployment of barbwires near the border of the conflict zones, in which case the issue of the refugees was also covered “among other things”.

The eviction of refugees is a topical issue for the Georgian media, but it’s only given a one-time coverage of a sensation. I remember the collapse of a temporary habitation for refugees 29 February 2012. The event caused a serious resonance at the time, as 38 refugee families had been living in life-threatening conditions for 15 years. The politicians took the advantage of the situation and used it as a tribune. We frequently heard their comments on TV that the problem would soon be settled. More than a year has passed since, yet nobody has expressed concern in the fate of those people. We can use that concrete case as a general description of the attitude of media towards the coverage of refugee-related issues. The facts are given a one-time coverage, then the media simply forgets about its “watchdog” function, and nobody controls the government; whether or not it faithfully delivers on its promises.

Internews Georgia conducted a research in 2011 regarding the coverage of the issues of forcibly displaced persons in Georgian televisions, which were GPB, Maestro, Kavkasia, Rustavi 2, Imedi. The results pointed out to the fragmentary nature of the coverage of the issues of internally displaced persons(IDP) provided by those televisions, and that such coverage doesn’t give an adequate description of the situation.

It’s stressed in the report that the coverage of the refugee-related issues are often provided in conjunction with other issues, and that TV companies don’t revert to subject given a one-time consideration, so that the viewers can’t follow the developments around a concrete issue. The conclusion of the report as well suggests the TV companies being partial with respect to the coverage of the refugee-related issues, and that the subjects of the related stories derive from that attitude.

“Kavkasia and Maestro were the companies that had spread information regarding the accommodation of forcibly removed persons in the new habitations, and covered the government’s actions in mostly a negative tone. Whereas Rustavi 2 and Imedi had totally evaded such “problematic” issues. In those rare instances when these 2 televisions were mentioning the refugees, the narrative was related to the government’s endeavor to settle the issues of the refugees,”- reads the conclusion.

Such nihilism in the media’s coverage of the refugee-related issues has several reasons. They can be related to the degree of the media environment independence, level of democracy in the country, independent editorial policy of the mass media, or even to social-political-economic condition. This list can be further continued, but that’s already enough to see and analyze the degree of the information spread in Georgia.

I have come across an interesting material while searching information for the article. “Caucasus Edition: Journal of Conflict Transformation” is mainly covering the conflicts that unfold in the Caucasus. The author of an article called “IDPs in Georgia: Still Waiting for Better Life” as well touches upon, together with other social-economic problems, the subject of the media coverage of the refugees’ issues. The article explains the incompetent and inadequate coverage existing for that matter the following way:

“ First of all Georgian is concerned with its image in the international arena, hence washing its “dirty linen” in public, i.e. publicizing of the IDP related issues is not an option for it.

Secondly, society isn’t interested in the challenges and issues of refugees.

Thirdly, internally displaced persons have no platform to influence political, economic, and social processes. Therefore denying them is an easy option for the media and the rest of society,”- the author says and, lastly, offers her own recommendations- “the media must become stronger in order to ensure the increase of awareness regarding the refugee’s issues and create a platform for them. Accordingly, internally displaced persons will have an opportunity to influence the settlement of their issues.”

The media has the power to have a positive influence upon the process aimed at the settlement of the refugees’ issues. To do so it needs a bit more endeavor and much more objectivity and independence.