The Golden Apricot International Film Festival has managed to do something important during its 19 years of existence: show the Armenian audience fresh international films and become a map maker in the region. In other words, depending on the films it showed and at least the logic of the awards, to depict where we are today.

After all, we are what we choose. We don’t always choose that which is prospective, we may stop at the dead-end option as well. But the important thing is that there is a wide field to choose from. And the eye will look at and evaluate as many options as possible.

From the first days of its creation, the festival has declared that it is a crossroad of cultures and civilizations, that even in difficult times it chooses not to partake in political opportunism, but the new and fresh, or if it does not find such at least the most human-centered films.

It seems that it has become a norm (actually, invented) that sharp political words must always be opposed to quality and must be of a low level. And the best thing that the festival, which has state patronage, and the state is in a tight position, can do is to maneuver.

So that it is not suddenly too sharp and suddenly not too flat.

And the voting of the Golden Apricot in 2022 can be considered an example of mapping a boat in political waters.

In 2022, the situation in the world is so complicated that it is even impossible to assume that it is possible to present awards and thus put the seal of a festival and, thus, leave a document for the future without politics. In the conditions of the great war and the explosive reality of our region, any award will somehow be perceived as a political decision.

And we are not only talking about the Russian-Ukrainian war that has been going on for almost five months, the creeping Iraqi conflict, and the endless Syrian conflict, but also about the Artsakh war that we survived and are still surviving. And all this against the backdrop of restrictions on freedom of speech, increasing pressures and political populism, and sometimes just blatant propaganda and lies.

And it turns out that there is not just a movie, there is a movie that is playing today. Or it isn’t played today. Touches the brain and heart of the audience. Or passes by quietly.

This year, Yerevan was given a unique opportunity to show how far-sighted, forward-looking, and open-minded we are. That we are really a crossroads, providing free flow. And the important thing is the evaluator.

We saw the latest films, which, if it weren’t for our festival, we would hardly have watched so quickly and with such interest, and most importantly, in their original languages, not with Russian dubbing.

Among them were Sweden’s Ruben Ostlund’s sarcastic and apocalyptic “Triangle of Sorrow,” which won the Grand Prix at this year’s Cannes Film Festival, a joyous and contemporary reexamination of social roles, money, and love, and Austria’s Ulrich Seidl’s “Rimini,” about a charming and elegant aging singer and sunset of Europe, “Alcarràs ” by Catalan Carla Simón, the winner of the Berlin festival, a poetic drama about the connection between people and the land, shot by non-professional actors (life falls apart, but the peach harvest must be harvested).

But no matter how much the non-competition program proves about the professional connections of the festival organizers, it cannot be a brand. The brand of the festival is the awards. The seal that the luminary puts is proof that it is on the map. And that map is real, drawn in this very place, in this very year.

Emotional, monotonous, and with a stencil finale for romances – death, this likable (no more) film could easily exist both five years ago and ten years later. Love, poverty, and social injustice are eternal themes, and farming is the prize. 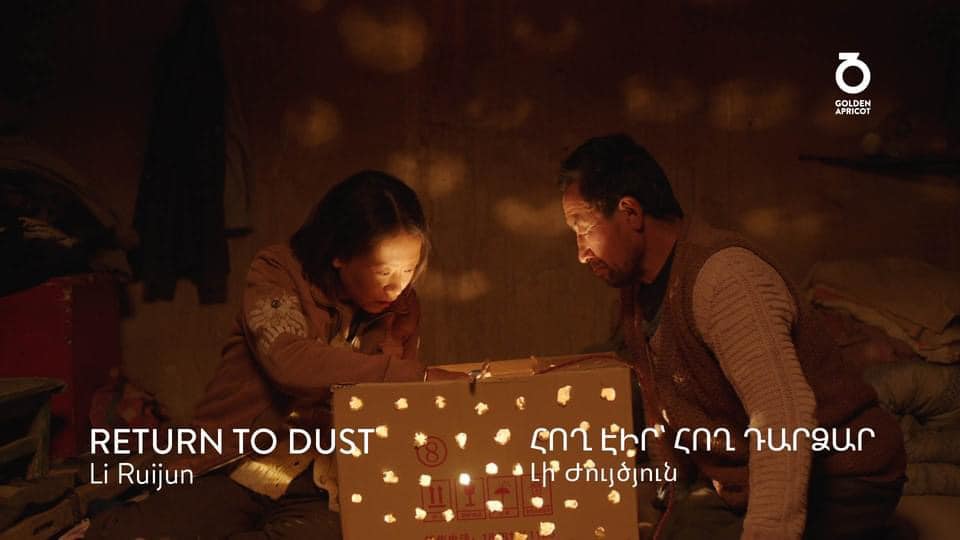 But declaring it the best film in today’s Armenia is not seen as a far-sighted calculation, and not even a sign of a weak sense of smell, but an attempt to draw a map that will be as non-political as possible. Or rather, it will be a gentle hint that there is a backup option to ignore politics.

Inna Sahakyan’s animated documentary “Aurora’s Sunrise” received a “silver apricot.” Of course, it is worth talking about this film separately. It is a restrained, balanced (even overly so), and intentionally toned-down emotional film (which is a very big advantage). The story is driven forward by the heroine, Aurora Mardiganyan, and the authors, when choosing between animation and documentary, stopped at animation. In other words, it creates a certain distance. Animated horror is preferable to photographs because it allows us to imagine what is unimaginable.

“The Apple Day” by Iranian Mahmoud Ghaffari, a story about a family that does not despair in difficult times and manages to find hope, won the FIPRESCI prize for the international film critics in Golden Apricot. The main character is a stubborn, proud, and open-eyed boy who knows the price of being poor and the cruelty of the environment.

In general, Iranian directors are so good at making films about themselves, without a lot of money, special effects, and stars, that one can only envy. “The Apple Day” is just such a film, honest and full of domestic poetry.

This film was also awarded the Silver Apricot of the regional competition, and the Golden Apricot was awarded to Kurdwin Ayub of Iraqi origin, living in Austria, “Sonne,” about the clashes between women, Islam, and the European environment and traditions. Rap and a headscarf: and why not?

Iraq, Iran, China and Armenia are not alone in the Golden Apricot map. Let’s not forget Ukraine.

The “Best Humanitarian Film in Promise” special prize was awarded to the documentary film “A House Made of Splinters” by Simon Lereng Wilmont, which tells the story of children and social workers in a Ukrainian orphanage. The film was shot in Donbas. Children are forced to end up in an orphanage because their parents are involved in major disasters. This modest and not very original film deserves attention now in the context of the war in the world.

The Golden Apricot has always avoided talking openly about political issues, preferring to invite people and films that will speak for themselves. And in any case, they will speak carefully.

This caution and sense of moderation begins to crack when it comes to Armenian films.

One Armenian and one Russian film

Choosing Karin Hovhannisyan’s “Invisible Republic,” edited like an agitational digest about the 44-day war in Artsakh, as the closing film of this year’s festival is at least puzzling.

A film with such axed messages cannot be a productive decision. Yes, the subject is ours, the pain is fresh, and the future is uncertain, but all the same, to work with such material in this way is to fail.

Although the film is presented as a diary of Artsakh journalist Lika Zakaryan, it is not a diary (which implies a delicate and personal, rather a form of monologue), but a desire to show the world what happened to Armenians.

As a result, the girl’s thoughts are lost in the extremely pro-Armenian or extremely anti-Armenian thoughts and words of presidents and various influencers. The film is so much about everything that it becomes about nothing. Plus, the abundance of music, clip arrangement of shots, and lack of a hint of self-criticism.

And sometimes it turns out that when you criticize unsuccessful work, you inadvertently enter such political thickets where you can be accused of lack of patriotism. The “Invisible Republic” was undoubtedly created out of the best patriotic motives. But it makes it visible, first of all, that we are not ready to talk about reality, not desire. We are preaching to the world, instead of talking about ourselves to ourselves.

The jewel of this year’s Golden Apricot was, without a doubt, the Russian film “Captain Volkonogov Has Escaped,” which was rejected in the international competition, despite the fact that it has every chance to appear on the “shelf” in recent history in Russia. In other words, it will not be released in wide cinema and it will not appear on the Internet anytime soon. 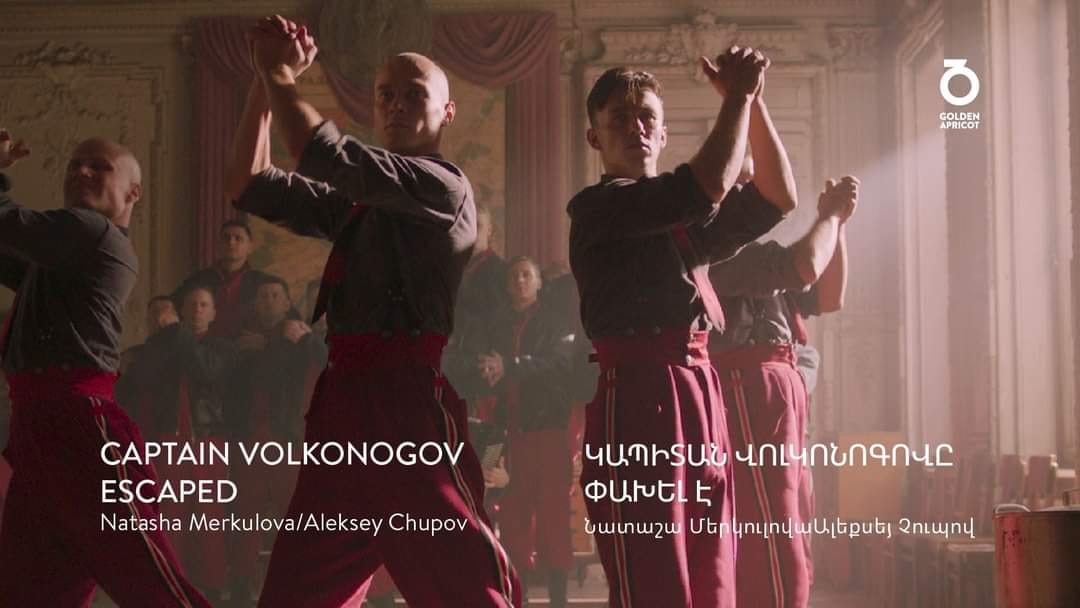 The film was screened at the Venice Film Festival, then at several festivals, including in Yerevan.

This is a film of repentance about the year 1938 when the great terror gripped the Soviet Union (including Armenia) and the special services became implementers of the ideology built on the atmosphere of fear. It is a punishing machine that eats itself from the inside, destroying, torturing, and shooting with planned logic.

Directors Natasha Merkulova and Aleksey Chupov were very free with the story, this is not a construction of a specific reality, but a counter-utopia, where you can escape from hell only by keeping heaven in mind. In Volkonogov’s case, hearing the words “I forgive you” from at least one of his victims.

And this is by no means a primitive starting point. Masculine, trained, handsome, and fashionable (in crimson or other red clothing specially created for this film), the men seem not from the past, but from a parallel reality. Where there are all possible psychological tricks and all manners of how to justify that which has no justification.

For example, to justify this way: we kill and crush innocent people, presenting absurd accusations, because if they are innocent today, it does not mean that they will be innocent tomorrow.

The film, swaying between mysticism, horror, and thriller, is very recognizable today. And also “dangerous,” because it shows the banality of evil head-on.

The film “Captain Volkonogov Has Escaped” did not receive an award in Yerevan, but it was shown. That’s already good.