The Aftermath Of The Interview With Artak Beglaryan 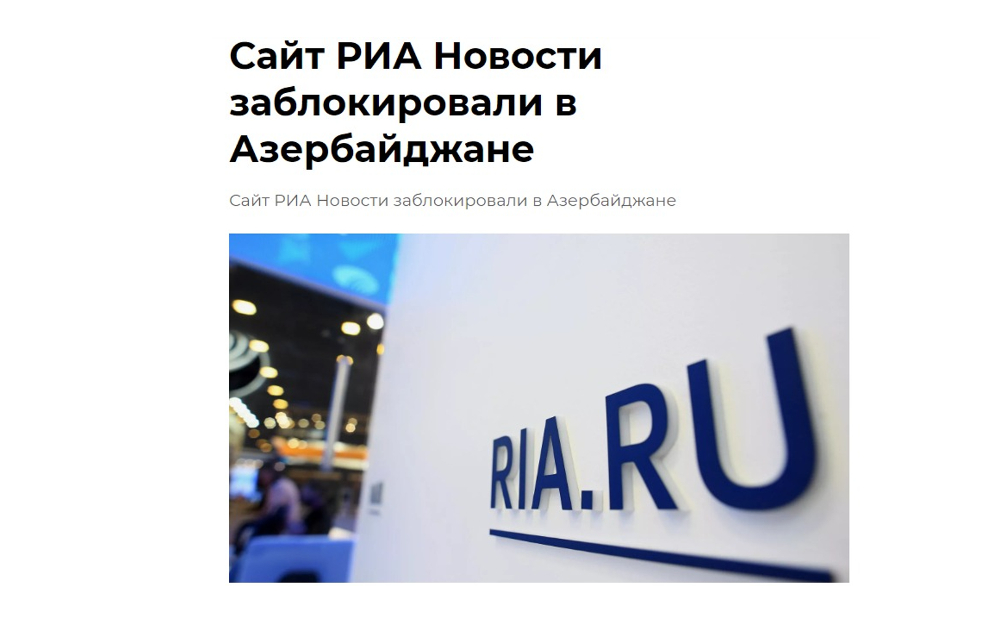 A very interesting example of clarifying relations through media messages was a Russian-Azerbaijani episode, where Armenia and Artsakh played only a passive role, meanwhile the main players used the collective point of view of the Armenian population in Artsakh as they wished.

On June 3, the Russian state news service РИА Новости published an interview with the state minister of the unrecognized republic of Nagorno Karabakh Artak Beglaryan.

Now the interview has been removed from the site (which can be read here), and РИА Новости has been blocked in Azerbaijan on the grounds that the site disseminated information aimed “against the territorial integrity of Azerbaijan, [which was] slanderous and propagat[ed] separatist tendencies.”

Accordingly, they used their law on information protection to block the major Russian media platform in their country.

In Russia, this rather demonstrative step has been accepted with understanding and calmness that not even a whisper of protest can be heard. In any case, the big propaganda units in Russia do not pay much attention to this fact. In the way that it happens when a country dares not just to block, but to even say one sour word aimed at the Russian state media.

On June 10, Azerbaijan took another step: suspending the work visas of the editor-in-chief and producer of the local department of Sputnik. They left Azerbaijan. It seems that Baku sent a message to Moscow that it could another Russian propaganda giant, Sputnik’s turn next. Moscow understood that message, removed the interview, and it is very possible that РИА Новости will be available in Azerbaijan again in the coming days.

Of course, this was not a Russian-Azerbaijani media war, but in any case, it was a serious shooting, where Armenia was used only silently.

It is very important to remember that in the interview with Artak Beglaryan there was nothing about the Azerbaijani war crimes during the 2020 war, there was a brief word about the risk of ethnic cleansing and examples of vandalism against Armenian cultural monuments.

The main idea of the interview was that Russia was able to stop the war, that Russian peacekeepers should remain in Artsakh indefinitely (at least until the final settlement of the conflict) and that the powers of Russian peacekeepers should be expanded and increased in number. That Russia is the most important player in this region, and the European and international structures did not take active steps to solve the humanitarian catastrophe.

In other words, all of Artak Beglaryan’s statements were obviously in Russia’s interests.

And the Russian state news agency calmly refused to leave those allegations on its website. By easily removing the interview with Artak Beglaryan and receiving a message from Azerbaijan that Sputnik could also be blocked, Russia achieved its goal, manipulated the issue of the people of Artsakh and made it a subject of trade.

And now Azerbaijan continues to call this interviewer “provocative,” but speaks more confidently, stating that something is wrong in the Russian media field, as strategic partners do not do that.

Russia and Azerbaijan, which send hints to each other through media resources, of course, have a solid and authoritarian state system, where all steps in the media field are coordinated with the authorities and become a continuation of state policy.

In a much more democratic Armenia, the media domain has a completely different layout. All the forces are directed to discuss very narrow issues in the internal market and to look for restraining mechanisms.

And at the state level no one says that Russia is a strategic ally of Armenia including in the media sphere. At least, it rebroadcasts all propaganda TV channels for free, with the most toxic content and never demands an explanation why the interview of the Artsakh representative has been removed by the state news agency.

Moreover, this question is not asked by many other political forces concerned with the fate of Artsakh, which are holding demonstrations, but do not dare to ask that question from different tribunes.

The question of why РИА Новости did this interview at all, probably has one answer: so that it could remove it later.