The Political Folds Of Magical Lavash 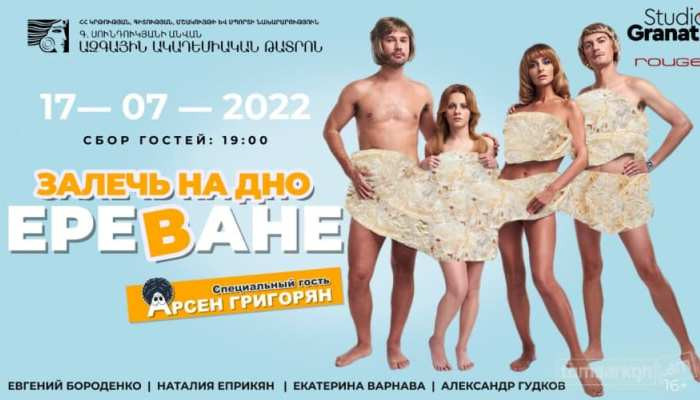 The poster of the show Enterprise, where Russian comedians cover their naked bodies with lavash, like underwear, and advertise their visit to Yerevan, suggesting that now is the time to “Залечь на дно в Ереване” (lay low in Yerevan) could have been a normal episode. But it became more.

The Armenian endless reliance on sacred symbols came into play, when wrapping oneself in lavash is considered blasphemy, shameful and a violation of centuries-old values. There was a rumor on social networks that even UNESCO recognized lavash as an Armenian value, and foreigners spit on lavash, pressing it on their skin, unprotected by any fabric. In a word, they disrespect the Armenians.

This, of course, is an inadequate and fruitless response, as the conversation always leads to a deadlock, leaving an unpleasant provincial residue.

For example, in this case, it can be countered that lavash is such a strong symbol that it cannot crumble if you wrap it around a body instead of cheese and greens, even if it speaks a foreign language and was born with foreign genes.

And lavash could shine and become more important, even become a new symbol of salvation. For example, as a symbol of warmth and warmth of people who have lost everything. The people whose state provoked the war and left many of its citizens confused, hungry and naked.

But in this whole story, apart from the mass clash between the saint and the blasphemer, who always uses weak weapons, there are two important issues.

Who wore the lavash?

The first question is who came to Yerevan and decided to lay low with this memorable, criticized and active PR, understanding how to make noise out of nothing well. Admit that you would not even know about this performance if the Armenian lavash and the Russian body did not meet in this poster and did not become so advertised. And advertised first of all with anti-advertising posts and campaigns.

The poster is an announcement of the “Comedy woman” project of the Russian channel TNT TV, and as it is known, that channel combines propaganda and comedy quite well. And it is also a serious weapon in tense situations, when the Russian state system uses comedy (in the allowed dose, of course) to alleviate public discontent.

It is a rather predictable comedy model, and TNT is a Russian federal channel owned by the state-owned Gazprom. By the way, in February 2022 (a few days before the start of the Russian-Ukrainian war) it began to be led by the famous propagandist Tina Kandelaki, for whom the war is a matter of pride.

This might seem like useless information, if there was no question whether the actors-comedians still continue to work for that channel or not. If so, it turns out that the Armenian protest is against Russian state media projects.

And it would even be ridiculous that the defenders of the sanctity of lavash suddenly realized that they were actually writing against the Russian state machine, albeit with very weak justification and the attitude of an offended child.

In any case, the participants of this comedy project are very cautious about both the Russian state and the war. And they try to speak in a neutral position only about their tours, although they are not obvious supporters of the propaganda, but they are not active critics of the state’s steps. Although, as usual, they will mock provincial Armenia and make some exotic jokes about passionate Armenians.

They said that what is being shown in Yerevan is a performance-confession “about the lost Muscovite spirits who are looking for a good life in Armenia.”

And Armenian society says to these lost spirits, leave the (holy) lavash alone if you want to have a good life. Would it have said it if there were propagandists? They probably would have, but those who said it would be guided by other groups.

This anti-lavash campaign was spontaneous, but also directed. The groups that always defend the interests of the Russian state, which are often joined by the Armenian Apostolic Church, allow themselves to exacerbate this story in Armenia, as the Russian actors are not clearly propagandists (some of them even received threats when expressing pacifist ideas).

The weakness of state institutions

There is another beautiful and bad tradition in Armenia: state structures retreat immediately when it comes to the holy and sacrilege. When talking about art, many institutions accept the side of the saintly and nationalist values, although they cannot explain well what it is.

The Sundukyan National Academic Theater, where the performances “Lay low in Yerevan” («Залечь на дно в Ереване») were to take place, immediately retreated, as if receiving instructions from higher authorities to stay away from this story, which is in fact quite scandalous and also political.

The theater spread an announcement and said that the sketch of the poster of this performance was not agreed with them and they are not responsible. Therefore, the theater is in favor of sacred symbols. There were even suggestions that the performances should be canceled. And it is not surprising if that is the case.

Such a tradition has existed for a long time. The Ministry of Culture of the Republic of Armenia, now the department of the same name in the ESCS, has often canceled theatrical events only to avoid accusations of losing touch with national values.

Years ago, an English actor was removed from the stage because he dared to put the flags of Armenia and Great Britain in his pants. And now Russians are on stage using lavash as a way to cover up their genitals.

The theaters are retreating very quickly, alas. And in every way.

They will always be in favor of banning, closing and saying noble words, and staying in the safe field again and again, producing performances that say nothing to the heart and mind every year. It is safe for them to stay in the same symbolic period. And a society with safe theaters becomes a supporter of closing and banning.

Even if the play is rubbish and pure propaganda, banning it over an article of disrespect towards symbols is already comedic. Yes, it’s a bad poster, so what?

Question: What if there was apricot jam on the body instead of lavash?

For example, in Eden, Adam and Eve meet under an apricot tree and are honored with apricots. Would that be blasphemy?