Today, social networks are one of the main tools for the political position and opposition elite of Armenia. Perhaps we could have avoided even writing this sentence because it is too simple.

Undoubtedly, Facebook remains to be the most popular platform. Although, no matter where you go, you will find Armenian political content, from TikTok to Clubhouse (although, regarding Clubhouse, I may have exaggerated a lot).

In recent years, politicians have gradually begun to take over Twitter. On the one hand, the Armenian audience has been growing here. On the other hand, this is the most convenient platform for the world to see. And from the point of view of international politics, Twitter is more stylish, if such a term can be used here.

Let’s consider our political Twitter landscape. And keep in mind that the pages are of many different styles. Let’s mention some social network rules in our history today, which have an impact, especially in digital politics:

a. Social networks are like chess: If you touch it, you have to play. If you started running a page, it’s not a good idea to update it once a month. Let alone, leave it abandoned for years.

b․ Information copied from websites about official meetings, and long-winded announcements do not have as much impact on Twitter as more “live” and direct speech.

c․ Accounts that are kept by the politicians themselves are more influential than those that are run by the assistants of the press secretary of the social network marketing department.

And now go through our political Twitter pages (the list is not complete, but will help to get an idea. The list is also made in a chaotic order, according to the order in which it opens in the author’s web browser).

The “Civil Contract” account has not updated its page since the end of 2019. It is not clear what has changed since then. By the way, at the same time, the “My Step” Bloc page has also stopped being active.

The “Armenia” Bloc page is quite active. The number of followers here is not very big, a little over 800. However, the page actively covers both the current protests and there are some activities from their followers.

The “I have honor” Bloc has a page with 14 followers, which has not been updated since last summer.

The official page of the ARF has more than 1600 followers. This is not a big number in itself, considering that the Diaspora has a bigger presence on Twitter in many countries. In addition, the audience is very passive, each post has several engagements, mostly by the same people.

Robert Kocharyan has a rather active English language page. But for unknown reasons, since the protests began in Armenia, the page stopped being updated.

Arthur Vanetsyan stopped updating his account after the war.

Nikol Pashinyan has a very active page with a large audience and it is very official in nature. It works entirely for an outside audience and only affects foreign relations.

Anna Hakobyan has not updated her page since the end of 2020.

Alen Simonyan’s page is active. But during the last year, it has changed from an independent entity into a platform for spreading press releases and announcements.

Hakob Arshakyan’s page seems to be run by him. And the updates are so inconsistent that a month may go by without more than two posts.

Edmon Marukyan has an actively updated, most likely, self-managed page.

The page of President Vahagn Khachatryan, the link to which is posted on the official website, does not exist at all. 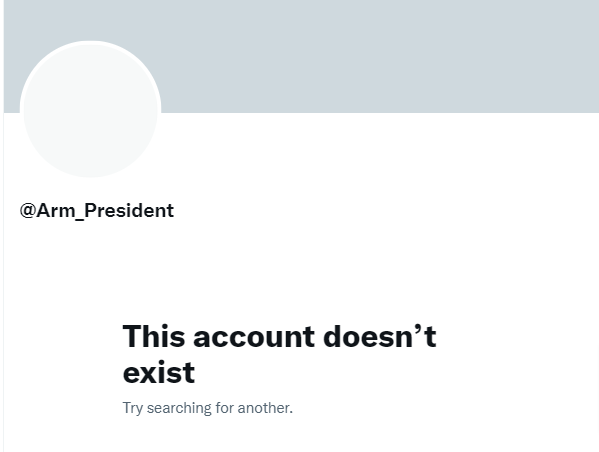 Serzh Sargsyan does not have a Twitter account. At least there is no such link on his official website. The other pages, thus, cannot be perceived as related to his person.

In general, we can say that the political elite on Twitter in Armenia is very, very mixed. In the stable official sphere, the diplomatic sphere of the Republic of Armenia has been represented on Twitter for many years, regardless of the composition of the government.