The Media Field In Armenia: Autumn 2021

In Armenia, the main trends that shape the near future of the media field can usually be noticed in autumn. Let’s see what unique changes or dynamics are present in the Armenian media at the moment.

The first interesting point is that there are unique developments among the leaders of social networks.

The first thing is that a process of stagnation on Facebook has been going on for a long time. It has been almost two years that Facebook’s Armenian audience has not actually grown, the active audience fluctuates between 1.4 and 1.6 million users.

The number of users mainly reaches 1.6 million in times of crisis. At the moment, the audience has stabilized at 1.5 million.

However, in all probability, we can start looking out for the decline of Facebook, if nothing changes on the platform. Instagram’s audience is growing very fast, which at the moment is almost equal to Facebook, reaching 1.2 million. Moreover, in recent months there has been an explosive increase in the audience on Instagram, which may lead to an even greater outflow to this platform from Facebook.

There is already such an outflow: The youth is going from Facebook to Instagram. But now such an outflow is also observed in an older audience, as well as by businesses.

The over-politicization of Facebook, the unfavorable situation for business (because Facebook’s algorithms have almost zeroed the organic visibility of business pages) lead many to think that other platforms need to be found.

This leads to unprecedented growth of Instagram: In fact, in one year, the audience has grown by about 300 thousand, while Facebook’s growth charts are on a plateau, which may be the beginning of a decline. However, it should be noted that the Facebook Marketplace trading platform is starting to open for Armenian users, which can breathe new life into the social network audience.

It is not only Instagram that is growing. TikTok continues to grow with the same success both in the world and in Armenia. The social network does not reveal the data about Armenia yet, however, we can say for sure that the audience reached hundreds of thousands long ago and continues to grow. 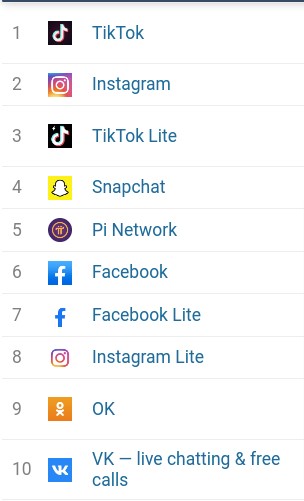 The most downloaded phone applications from Armenia, according to Similarweb, beginning of September 2021

As for the Telegram channels, there is a certain tendency here. If after the war the channels of Armenia and the Armenian Diaspora (in the case of Telegram, it is quite difficult to differentiate between the channels from Armenia and those from the Diaspora) abruptly lost their audiences (the decrease in the audience applied to almost all channels), at the moment it can be stated that the situation is beginning to change.

Now some of the channels are losing the audience with the same success, but a number of channels managed to stabilize the situation and enter a phase of slow growth.

A similarly uncertain situation can be found with different Armenian YouTube channels. Most likely, the direction of the main development of these two platforms will be decided in the coming months.

As the domestic political order has seen a sharp decline, and on the other hand society has a demand for interesting content, it is possible to form new content and promote new faces in Telegram and YouTube. In that case, we will see a sharp increase in these two platforms. If not, we will be satisfied with the popular content of TikTok and Instagram Reels.