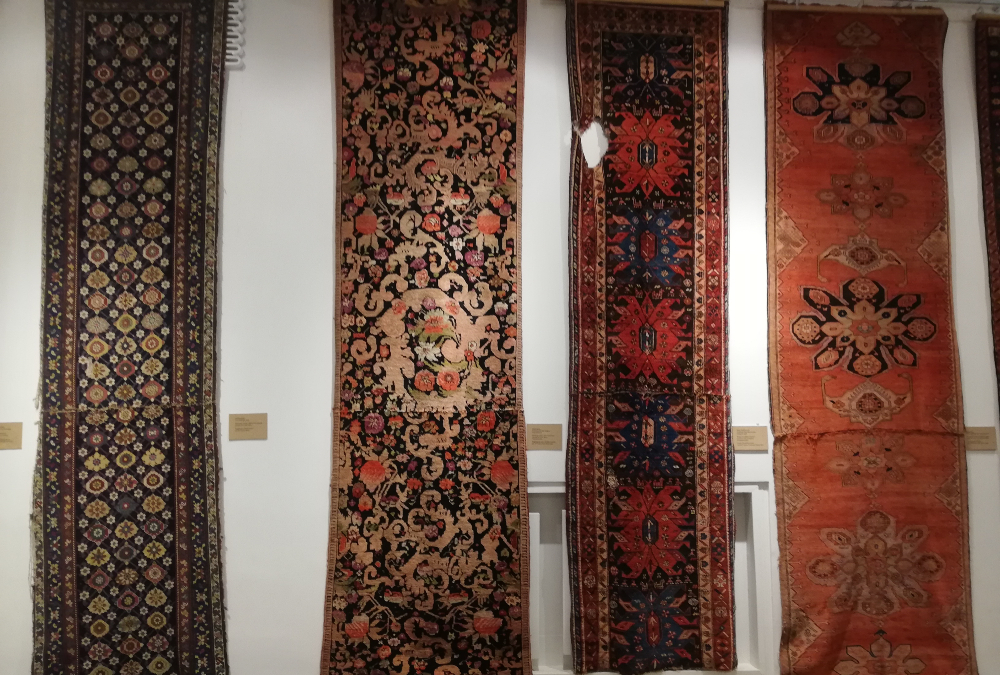 The Shushi Carpet Museum was evacuated from Artsakh in the last days of the war, it was like a special operation carried out by the museum’s founder Vardan Astsatryan.

Of the five museums in Shushi, only the carpet museum survived, although not completely, about 120 carpets, bronze and stone age pottery and other useful items remained in Shushi, which passed on to Azerbaijan.

The carpets from Shushi have been on display in Yerevan for several months now, speaking about Artsakh from a completely different starting point, the continuity of memory.

In general, the carpet itself is a very interesting subject. In addition to its practical significance (be it warm, soft, comfortable), it is also a message encoded with ornaments. And unlike, for example, khachkars (cross-stones), which are aimed at connecting with the afterlife, carpets are always about life, the person who lives today.

The carpet at the intersection of myths, divine topics and folklore always tells a unique story.

“Carpets are a means of popularizing ancient symbolism, proto-symbolism. That is, they have made these values accessible to the masses. And whether you like it or not, you know how to read those symbols or you don’t, they work because it touches on universal values,” said Vardan Astsatryan.

The appearance of the pattern is influenced by the density of the thread, the number of knots per decimeter. The thicker the carpet, the more realistic the pattern. In thin fabrics, the pattern becomes a graphic image. Simply put, carpets are the first pictures received in pixels. These are works that require a constructive, mathematical solution. The important thing is the calculation. There are silk carpets, the density of which reaches 200-250.

Carpets are visual texts, illustrations, even movies if you want, from which it is important to choose the angle.

You look at the carpets from three points of view: from top to bottom, from bottom to top, around you. Above is the heavens, the universe, the unknown and the supposed, the stars and the planets, and finally God. You raise your eyes to see. And you definitely need to imagine, because the beyond requires imagination.

There is also the opposite angle, from which they look at us mortals from above. The Seer is usually God. With this in mind, carpets with stories about the creation of the world and the afterlife are created.

And if you look around and depict what you actually see, you get a simple and clean document. The result is flowers, animals, everyday stories, recognizable episodes. For example, a cat lying on a throne, a nightingale in a cage, a swallow weaving a nest, a mare running in the fields. And many lilies. Shushi, Lily, lily … A flower that is a sign of divine power and often appears on royal garb.

“The stories of our carpets are very dynamic, there is a development of a story, a movement,” said Vardan Astsatryan.

For example, in this carpet, the sky is at different times of the day: dawn, day, night, night. Like an edited video, the day opens, then rests. In order to get a complete story in this “Astghagorg,” a color division (light blue, dark blue, black) was used so that the transitional phases of the sky merge smoothly into each other. That time flows in the sky and we, the earthly beings, feel that flow.

Vardan Astsatryan says that Arabic and Persian carpets are usually a story of one moment and one situation, for example, paradise or life. And in Armenian carpets, the divine themes and folklore are harmoniously found side by side.

We also find mounting equipment on the Armenian tree of life. For example, the Eden apple tree looks different in different parts of the same carpet, first, it is fruitful, then it is dried. God saw and closed the gates of paradise, and the tree withered away.

The Silk Road, which passes through Karabakh, is depicted as a route, caravan road, road movie. There is a colored zig-zag in the sky, which symbolizes the smooth transition from night into day. Then again and again. It is a long path, it is a long zig-zag.

It is interesting that in Armenian carpets there are no clear and sharp borders, the changes are slow or deliberately presented in such a way that it seems that the two opposite situations come from each other. That is, life is presented in a complex and colorful way. Black and white at the same time.

It often seems that carpets need “translators,” commentators, who can read the symbols in the patterns of the carpets and see the hidden messages.

Vardan Astsatryan is sure that understanding the principle of ornaments is enough to be able to easily read the stories summarized in the carpets.

The symbols are the same for all the peoples of the world, the same symbols, for example, you can see in the culture of the American Navajo, Arabs or Slavs. Patterns can be repeated one by one in cultures that are completely unknown to each other. For example, there are patterns that were repeated by Americans and Armenians two thousand years ago. I do not know how this mechanism works, but wherever a person is, he immediately reads, for example, the symbol of a star and its shiny pattern, which is very similar to a cross. But there is an interesting difference: there is no pattern that Armenians did not use. Armenians did everything, you can find any ornaments on Armenian carpets.”

The “Astghatap” carpet tells a very interesting story. You raise your eyes to the sky and see that there are small people (aliens) descending from above in small vessels (spaceships?). They descend equally, beings of the same size and appearance.

In fact, this carpet visualizes the hypothesis that life on Earth did not originate automatically, but was imported from space in the form of a seed. And each star is a bag of seeds, which falls from above and sprouts on the ground.

And under the ground, in the underworld, where you go down the stairs, there are tongues of fire (inferno), scorpions, devils big and small and evil creatures. And those stairs are three-dimensional in Armenian carpets.

The messages that the carpets convey to people affect both the conscious and the subconscious. For example, with pictures of butterflies.

The butterfly is a three-stage creature that completely transforms three times. First, it is a caterpillar (consuming life), then a cocoon (temporary death) and finally a butterfly (ascension and liberation).

The butterfly embodies the soul in all peoples, an eternally fragile substance, the signs of immortality, of which mankind has been searching for since time immemorial. Only the bee, which is the mother in different folklore, can compete with the images of a butterfly.

Vardan Astsatryan also spoke about the gender roles that are coded in the carpets. When a boy is born, he is already the successor of the family, he will not be able to change. And the girl is changeable, flexible, and pragmatic. She is the foundation.

“Myths must be understood as a whole. It can’t be accepted literally. The carpet weavers never improvised, they were given a color scheme that had to be clearly repeated. Carpet weaving was a canonical art until the 20th century. The main clients were the pagan priests, then the church priests, and in recent centuries also the special class of people, whose goal was the popularization of values,” he said.

And if there was a time when art was for the elite, carpets helped to make it widely available. Also to inform and educate aesthetically.

Symbolism works subconsciously. The people had seen the same symbols in different places, mainly in the church, and instead, they would appear in their house, be spread on the throne, hung on the wall and given practical significance.

Vardan Astsatryan says that there were people who took on the responsibility of delivering the messages to everyone’s house with stencils of patterns and colors. So that there is no chaos and people’s lives would be regulated.

Carpets were one of the means of stability. Just like the media. Carpets are a media tool in modern language, for which stencils are written by the customers. And the question is, what is the purpose of those customers? 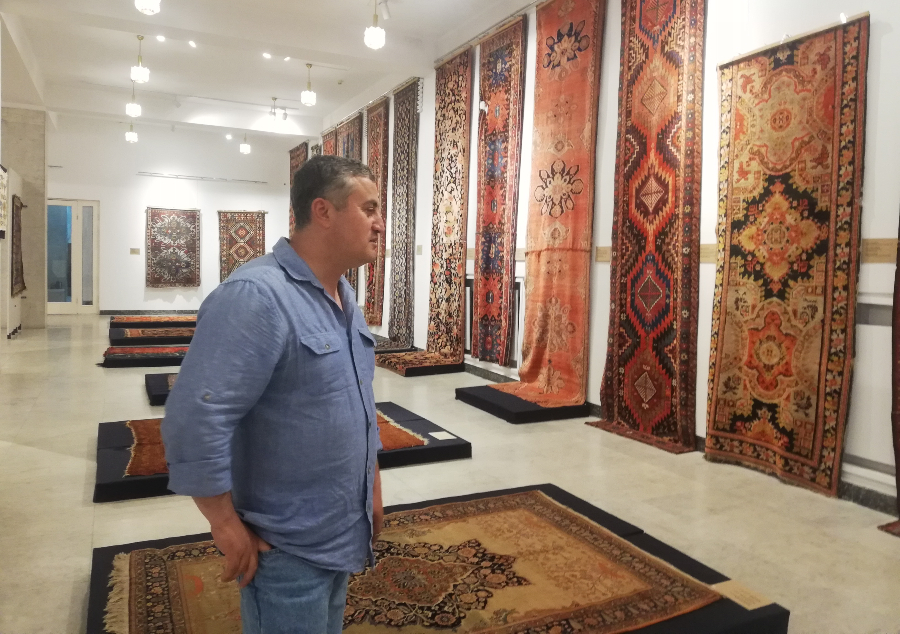 “Armenians have always been collectors and disseminators of values. Armenians did not invade, but influenced culture and knowledge. That is what makes us different,” Vardan Astsatryan is convinced.

He considers the carpet a pre-internet platform that unites, talks about everything. And carpet weaving technology, which is now disappearing all over the world, can easily connect with digital technologies. Animations are the closest to the logic of carpets spiritually and technologically․

“In a large sense, the stories created are just animations, moving visuals. Visuals and texts are inseparable in carpet weaving. And the ideas and solutions about life are gathered on one plane.”

Will there be a museum?

The carpet museum of Shushi is private. Vardan Astsatryan founded it ten years ago with his own efforts and bought the carpets with his own money. And most importantly, this is one of those unique museums, where the origins of each specimen are clearly identified and described.

In other words, the entire journey of carpets is archived, from creation to our days (who, where, when, with what material, who inherited it). Many rugs are tribal items.

Of course, there are museums in the world where you can find older, more valuable carpets, but in this museum, the information is fully summarized.

And this is a primary requirement if you are trying to be a museum by international standards. The museum sample must have a clear card library, otherwise, it will not be a museum model, but, say, have the element of a collection. “If I do not know the origins of the carpet, I would never show it,” he said.

Now the fate of the museum is unknown. It is difficult to say what shape and direction it may take in the future, but Vardan Astsatryan dreams that the museum will be not only an exhibition place but also an interactive school. And it is not only about the craft, which is already lost, but also about transferring hidden stories, game characters and storytelling skills.