Propaganda Behind The Front Lines 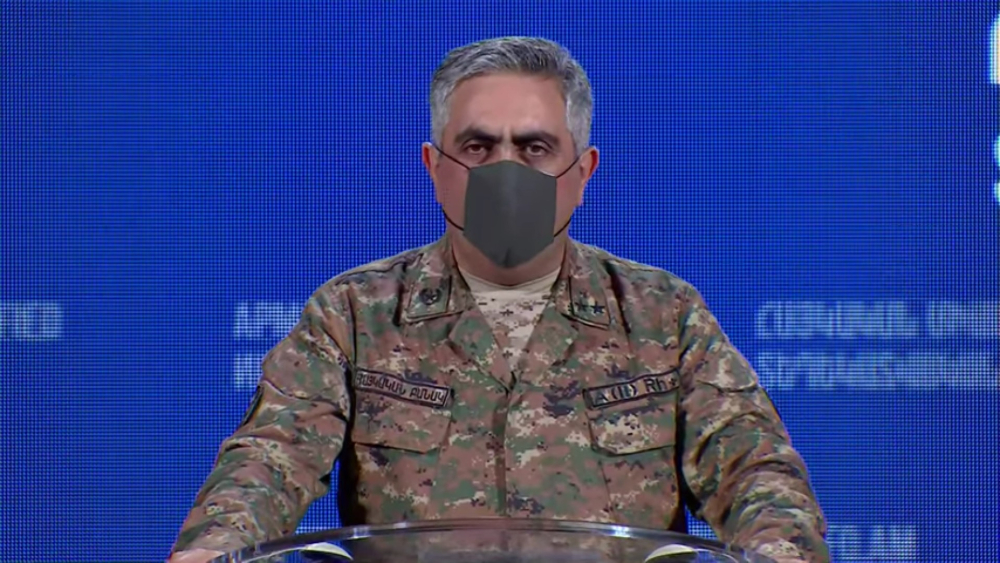 The representative of the Ministry of Defense Artsrun Hovhannisyan was almost not seen in the media after the war. Being the official “voice” of the war (in a sense also the symbolic conscience) in the media, he paused after the end of the war. By and large, he had nothing to say, because after the defeat, not only had the rhetoric changed (and changed dramatically), but also the propaganda itself. Deprived of the triumphant tone, it turned into rather chaotic speech, uncertain while ignoring that uncertainty at the same time.

Artsrun Hovhannisyan had a briefing with journalists in the National Assembly on February 1 and also gave interviews, talking about his sources of information (exclusively from the Ministry of Defense, the General Staff and the army), the propaganda (which he sincerely believed and considered necessary) and his role.

His words are a good opportunity to reflect on faith. And also trust, which is sometimes the antithesis of faith.

The basis of propaganda is faith, certainty, clarity.

But when there is no faith, there is no propaganda. This is how religious dogmas work. First is faith, then information, then faith again.

Information must be based on faith and be crowned with faith, otherwise, the information will not cost a penny in the propaganda structures.

And today the psychological situation in Armenia is quite difficult also because the propaganda quickly became a vain affair, and inside it is difficult to come to terms with the idea that we easily and voluntarily found ourselves in the propaganda trap. And subconsciously we wanted to stay as long as possible in the realm of those small, safe, pathetic and warm calls. Which, by the way, will remain in history with the image and accentuation of Artsrun Hovhannisyan.

Artsrun Hovhannisyan is right. No one can balance this eternal swing of believing and deceiving for centuries. If you believe or convince yourself that you believe, you do not feel lied to or furthermore a liar.

Faith is the cross and anchor of propaganda.

“I do not take propaganda allegations lightly, because there is no other type of propaganda during wars. Of course, there are mistakes, unverified or unconfirmed information, but not wrong propaganda,” he said in an interview published on the day of his briefing.

Artsrun Hovhannisyan is maneuvering a bit, of course, there is wrong propaganda. If the army is defeated, the propaganda cannot be right. If only because he did not prepare society for defeat. That is, for reality.

And it would be more correct to say that the propaganda prevented us from seeing the reality. That the propaganda calls, being attractive and comforting, did not leave room for more complicated and unpleasant analytical speech.

That the propaganda proved that faith is a weak weapon if it is the only weapon in our arsenal of public speech.

Artsrun Hovhannisyan explained the calls of victory that we heard during the war were done with the desire to keep the army efficient, to unite the views and thoughts of society. He also showed in numbers how many publications he made during the war.

He calculated that during the 44 days of the war he made about 400 posts on social media. 170 with the slogan “we will win,” more than 160 with the situation on the battlefield and containing urges of sobriety.

“That is, in a 50-50 ratio. I did not say “we are winning,” I said “we will win,” they are different things. But there have been more than 160 publications that stated that the situation is very difficult, it is a struggle for existence and similar sobering calls. Until the last day, as a soldier, I had to believe and I believed that we would win.”

The army is a hierarchical structure and it is natural that the representative of the Ministry of Defense, being part of that hierarchy, is obliged to obey the main line.

But let us not forget that millions of citizens who listen to him every day did not have that obligation. They needed information.

And again he is right. There could not be false information if it is about propaganda (by the way, Artsrun Hovhannisyan does not hide that the propaganda, though difficult, was given to him personally, but that was his job).

It does not matter if the speech is false or untrue. It is accepted, and that’s it. It is accepted by helping to unite the society, to motivate people to look in the same direction and to say the same words as a mantra or a prayer (for example, we will win). It is necessary to unite during wars, even with a certain amount of self-deception.

And then it is a big question of what is needed. Artsrun Hovhannisyan also spoke about that. But he said something strange:

“Everyone wants to discuss the details of the propaganda, leaving aside the real military-political, strategic reasons for the defeat, years worth of omissions, the issues of the art of war and weapons. I understand why it is, it is because they do not understand anything from the topics I have listed, the real factors of preparing the state for war, their interconnectedness, that is why the topic of news comes to the foreground, where manipulation is easy to do.”

Artsrun Hovhannisyan is wrong, the topic of news will always be in the foreground. The question is what that foreground will be filled with. The evidence of that is himself.

For almost two months he was the most popular character on the Armenian air, on the Internet, his words could be heard and were expected by millions of people on big and small screens. He was a media person with unlimited opportunities. It can even be said that he was the commander of the media. He could break and direct our thoughts wherever he wanted. And his words were trusted.

It is interesting that during the war, also a few months after the war, Artsrun Hovhannisyan preferred to talk about faith, but did not use the word “trust.” He did not say, I trusted… He said I believed…

Faith is a one-sided game (one says, the other joins silently), and trust opens up the possibility of equal dialogue (what I said is nothing as long as you do not trust me).

In any case, now that we are trying to get out from under the burden of large-scale propaganda and dismantle its impact, there is a great lack of trust. Starting with the army, ending with the media field.