A Glance at Media Dramas that we have witnessed 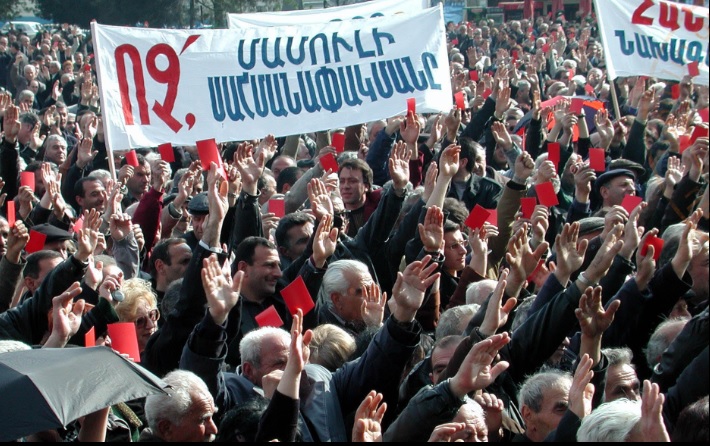 A multimedia exhibition titled No Censorship: the Media Dramas of “the Fatal 8s” – 1988, 1998, 2008, 2018 will launch on March 6. This project requires immersion and unhurried exploration.

This exhibition is based on a research that turned into a series of narratives, presenting the Armenian media landscape formed for the past thirty years.

The exhibition objects comprise narratives, i.e. materials that cannot be summarized, framed and archived once and forever – they need to be reviewed, branched off and supplemented.

However, firstly, they should be put together and make the voices of media drama witnesses heard.

No Censorship is the third exhibit of MIC Lratun media museum (the first one was called An Earthquake that shook the Media; the second one – Media Battle vs. Corruption.) The exhibit is about studying the life in Armenia through media coverage.

Not only facts have been studied (violence against the media and journalists, lawsuits, censorship cases) but also the hidden and untold stories that remained on the margins, never turning into topics of public discussion.

Vahram Martirosyan, a writer and the head of Lratun museum, says that certain events have happened right before our eyes but we have not studied them, have not talked about them, and many layers are now spread out, incomplete and hidden.

Now, attempts are being made to restore the chain of events through retrospective talks and news feeds, pondering about censorship (both external and self-censorship), about the ways the “pressure machine” worked, as well as the methods of “devocalizing” journalists and blocking unwanted information.

No Censorship has four components – Propaganda, Censorship, Pressures and Violence.

Each of them branches off into smaller sub-narratives, allowing exhibit visitors have a broader understanding of media industry actors and their role.

Visitors can use touch screens to watch interviews and to read excerpts from texts, finding explicit or hidden “traces” of censorship and propaganda tricks.

Vahram Martirosyan has collected “dramatic media layers” without emphasizing the Soviet propaganda, since its impact was too straightforward and harsh, but drawing attention to the “hard-to-trace” tricks “born” in independent Armenia.

The exhibition has a section called Balanced Reporting that demonstrates manipulative “impartiality” through certain journalistic materials.

Visitors will see how hate speech, conspiracy threats, discrimination and manipulation based on the fear of war become pretty common in the media.

And surely, the exhibition will help to restore our memories about the past, learning about “self-published” newspapers and the power of dissidence, cases of psychological and financial violence against the media.

Vahram Martirosyan emphasizes the fatal coincidences and the astonishing magic of the dates.

“Social disturbances happened in 1988, 1998, 2008 and 2018, leading to drastic changes in the media. Our exhibition showcases dramatic examples of Soviet censorship “cracking” and demonstrates how newspapers and TV companies were closed down in independent Armenia, how journalists were beaten, how new patterns of propaganda were created through abusing national values. The exhibition is a brief guide to differentiating between unbiased and biased reporting, corrupt and independent media.”