TikTok, we and them: what happens in the Social Media?

I have written about TikTok a few times. Just a year ago I wrote about the gap between generations – grown-ups are involved in fiery political battles, without realizing what students have been doing in Instagram and why schoolchildren have been hanging out in TikTok and Likee.

The situation changed within a year – Facebook started stagnating. Actually, its audience stopped growing long ago. The truth is, most probably, there is still certain “inflow” into Facebook. However, there is as much “outflow” as well – young people tend to leave this platform.

If we observe the adult audience of Facebook, we will see the obvious changes that have happened for the past three years. In January, 2017, the age ratio in Facebook was the following: 18-24-year-old women formed 27% of the audience, while men formed 32%.

Currently, the situation has drastically changed – the number of 18 to 24 year-olds has significantly decreased.

The number of young people has decreased in Facebook. There is a bigger outflow of underage youth. Facebook has grown older.

There was some growth in Instagram but it has slowed down as well.

Meanwhile, TikTok has demonstrated “explosive” growth. For months, TikTok has been among the most downloaded apps in Armenia and worldwide. 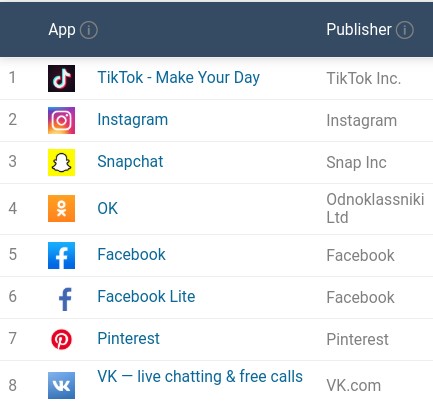 The rating of the social media for Android phones in Armenia, according to Similarweb

A year ago, TikTok was considered to be a platform for schoolchildren, whereas now it has become very popular among other age groups as well. Last year, Instagram was the main platform to “migrate” from Facebook. However, soon TikTok may lure a rather big audience from other social media platforms.

And this is not just about changing platforms. It’s also about consuming information – video pieces play and will continue playing an increasingly big role in the social media. Thus, the overall change of habits on the one hand, and TikTok on the other hand, will lead to a bigger demand for video consumption, which, in its turn, will boost YouTube development.

News-producing and videoblogging platforms have expanded a lot. However, there are lots of areas in vblogging that still wait for their vbloggers. There is still room for development.