A Selfie Is Not Only A Photograph 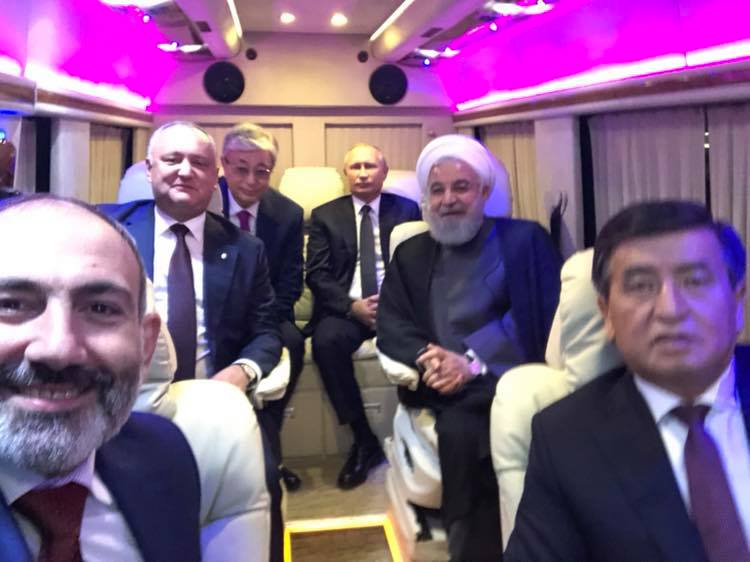 RA Prime Minister Nikol Pashinyan’s selfie taken on October 1, in an armored Mercedes Sprinter minibus, where everyone saw the leaders of the EEU Assembly, was essentially historic.

“Roadtrip Selfie ?  During this time we managed to make an important decision,” Pashinyan wrote on his selfie posted on Facebook.

They are very different people with different cultures and ways of life, different facial expressions and positions (frozen, surprised, satisfied, tense), but they all come together in one place and play the same role. They go wherever the host takes them and are photographed when the host wants to.

Nikol Pashinyan probably said that we are taking a selfie now. And he did it without thinking long. The moment has become historic because it is not very thoughtful and beautiful, it simply speaks. Involuntarily.

The picture is poor and of poor quality, but the very fact that trained and public image-makers (especially the one sitting in the back row and the president of a nuclear bomb) have found themselves in a new game. And they start playing by those rules.

A selfie has a nice feature: even though the one who pushes the button on the phone is a player, they are also the author.

And Nikol Pashinyan as the author of the selfie made a serious step to improve the image of the presidents. For example, quietly spreading the fact that a photo can be of poor quality, out of focus, with the wrong composition and illumination, and that is exactly the historical.

This is not the first and only selfie made by the Armenian Prime Minister during the Assembly on the same day.

There were others where Pashinyan is with other leaders. Even a selfie offering a toast to people who don’t like to take selfies.

But it was this “road trip selfie” that became the most popular, causing the start of memes and kind comments.

Of course, there were also comments saying that you can’t do that, it’s not serious, it’s shameful, but they didn’t create the mood.

French Ambassador to Armenia Jonathan Lacote attached this selfie to Pashinyan’s selfie taken with the French president and his wife last year, and disseminated it on social networks, writing that it was “multi-vector Armenian diplomacy illustrated by Nikol Pashinyan’s selfies (and humor).”

Anyone who had not spread or at least spoken about this selfie on Facebook felt uncomfortable. The cheerful (or skeptical) response offset expectations from official photos and behavior.

After this selfie, my life is no longer the same.

People accustomed to defending themselves from high-profile and public reactions were commented on and made a meme.

“Aziz, stop the car, there’s someone getting off at Baghramyan”, “And where is Lukashenko? At the wheel.” “No, Lukashenko probably manning the fire to get the barbecue started,” “Nikol collected the kids to go eat ice cream,” there were a lot of similar humorous comments.

In the Kyrgyz media, for example, the following comment was made: “Kyrgyz President participated in a group selfie.” That is, a familiar format was chosen to describe an extraordinary ceremony.

After all, as soon as they say the word “selfie,” people smile. And that doesn’t mean anything special. It’s just part of the culture.