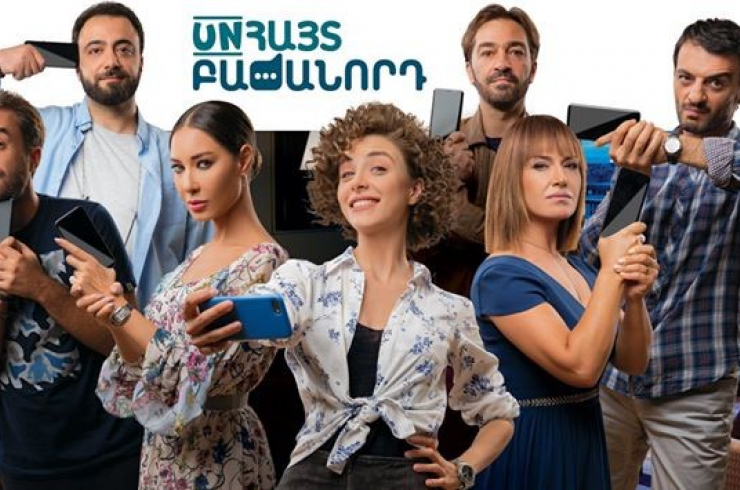 The film “Unknown Subscriber,” which began screening to Armenian audiences, has an important feature: there are many celebrities there. And those celebrities play roles of unknown lives.

A group of famous actors from films, soap operas, commercials, television and other visual products takes part in a comedy-drama, the focus of which is an unknown life in an era of open relationships. That is, at a time when virtual communication has become fast, ordinary, and requires continuous editing.

According to Russian producers, this film of Armenian production is a commercial in the original and classic sense of the word. It is done according to market rules and market forces.

The number commercially-produced feature films in Armenia were not few, they were mostly home-based comedies, which were more properly called products for  “laughing,” when the comic multi-story script wasn’t important, but the one-floor situation.

“Unknown Subscriber” differs from these films, first of all, with a strong script structure.

The script of the movie is not Armenian in origin, it was bought by the makers of the movie “Ideal Strangers” which was a successful film (the buyer is a Russian company that filmed the Russian version and then assisted in the production of the Armenian one).

That Italian chamber drama shown in 2016 demonstrated that there are universal stories that are easily localized and screened in all countries where there is a middle class, big and small family secrets, personal complexes, methods for fast connections and devices, the everyday interplay of phones and social networks.

The original Italian script is a good product in the movie market, with dozens of remakes already available in different countries. Now Armenia has had its version too.

During the plot of the film, we are met by longtime friends and their wives, and as a game, the decision is to make phone calls and messages public (you have nothing to hide, so show it).

As a result, personal information becomes accessible to everyone with all the dangerous consequences (romances, unexpected pregnancies, even more, unexpected sexual orientations, and various smaller confessions). Relationships break down, families break up, friendships are shaken.

The remake dictates that the core line of action, the patterns of acting, be maintained, while dialogues, secondary lines and interiors can be changed.

The film “Unknown Subscriber” (directed by Arzo Harutyunyan) has decided to give the camera dramatic dynamics and keep the heroes moving so that the audience doesn’t get bored.

As a result, the tensions weaken at a time when the question really arises – who are we, what do we say out loud or what do we whisper in private chats, confident that it will remain a secret. Or internally do we want to be discovered?

The beautiful people in “Unknown Subscriber” move beautifully, eat beautifully, chat. Their phones have accumulated information reminiscent of the “black box” of planes. Including the problems of Armenian society outside the film area.

There are public taboos that the European script touches upon very carefully, and the Armenian version bypasses with hints. But just the fact that dealing with those taboos is dictated by the script is already a good thing.

You are afraid of disclosure, but at the same time, you want to be revealed, because the secrets are like a weight on your shoulder. And revelation is necessary in order not to be destroyed in the end.

No matter how primitive “Unknown Subscriber” may seem, that thought can be read.

Family betrayal is not the worst disclosure; people are even afraid to tell their friends who they are. And those subtle fears in the Armenian version do not sound good. Or they sound beautiful, but not dramatic.

For example, the thought that you can no longer live with your mother-in-law, that you have been hiding information about an accident for years, that your childhood friend is a homosexual and that you do not know about it, but you find yourself in their skin.

In fact, that is the most dramatic episode, which is quickly concealed.

“The Unknown Subscriber” is a commercial film, without serious copyright stamps, without special effects.

The special effects of this film are actors with active public lives who play the role of average statistical Armenians.

And the audience is wondering what it would be like if the contents of Khoren Levonyan, Sos Janibekyan, Nazeni Hovhannisyan and other people’s phones suddenly opened up.

Actors and their fears of active public life (at least virtual) always have a commercial interest.