When That Which Was Not Expected Becomes The Reason For News 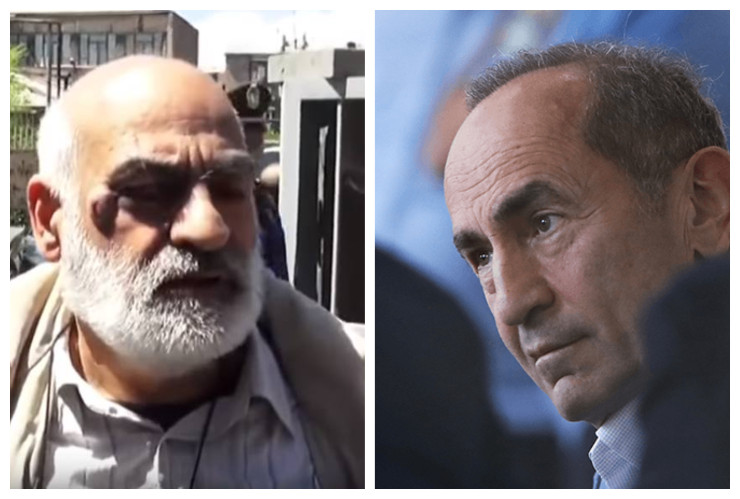 The first trial session on May 1 on the case of March 1, when the chief accused was the second president of Armenia, was noisy.

The process of the session, with homogeneous terminology and a gloomy atmosphere, for the most part, did not give the media an opportunity to actively cover. It was even more interesting to watch what was going on at the court entrance and in the yard.

There were Robert Kocharyan’s supporters, mostly carrying expensively printed posters, different people who were shouting “Nikol, Prime Minister” or “Freedom,” groups of journalists, who were searching for a leader to speak to for their reportage, and there was a Vardges Gaspari, a man who always carried out his political protests alone.

And hence he became the reason for the most sensitive news topic, which overshadowed Kocharyan’s “alliance of supporters’” show of support.

During the trial, Gaspari was subjected to violence. Kocharyan’s supporters struck him in the court building with a bottle and grabbed his handwritten poster, on which was written “Robbie Assassin, Robbie Scoundrel!”

Gaspari continued his protest without a poster in the yard in front of the eyes of more journalists, referring to his broken cheekbone and addressing everyone to respect human dignity.

Gaspari is a phenomenal person in post-Soviet Armenia. For many years, he initiated and implemented solitary protests, which, in the eyes of many were doomed to fail.

One person who turns to desperate measures, lying down on the ground, posters held to his chest or talking about injustice, has always been perceived as a marginal, semi-insane individual.

He was beaten, humiliated, imprisoned, mocked, ridiculed, beaten again, insulted, sent to a psychiatric clinic (in continuing the traditions of Soviet punishment), and he came, again and again, laying down, standing silently, or shouting, but he wasn’t “disciplined,” and he didn’t reconcile.

And for all this, he responded with his own body, more accurately he paid with bodily injuries, but he never attacked, he didn’t resort to physical violence.

He knows that it will not help the pyramid-semi-governmental system.

Such systems, like Gaspari, cannot accommodate people in their logic code, it is always out of the ordinary because it has not been heard or put in place before. It was accepted to take into account “serious” people, that is, those with connections and money. And Gaspari is not only not “serious,” but he is also not afraid of not being “serious.”

On May 13, the situation changed dramatically, and Gaspari’s incident gained development and a criminal case was initiated on the charges of violence against him. Several people were required to provide explanations, including the owner of Channel 5.

But with an ironic twist of destiny, Vardges Gaspari’s name is now inseparable from Robert Kocharyan’s name, because all search engines have unwittingly turned them into two actors of the newsflow.

Kocharyan, who is identified with a powerful media and financial backdrop, is being tried for the first time and Gaspari has done so many times.

Kocharyan is a “serious” man, with money, links, his connections and money weighing heavily, an advocate of being closed, and Gaspari has nothing to do with any of it.

Kocharyan is identified with a punishing-thieving gang and Gaspari is a “virus” of the system that has deprived the individual of the system for many years (it doesn’t matter what kind) the system ignores his steps (even if he said, speak to me in the plural You and not you).

The system ignored him and humiliated him, considered him as illogical, senseless, but now it has to admit that it has fallen in the end.

Even if it’s only because the news is Gaspari and not the other one.