Don’t Come Back From Paris Without An Interview With Aznavour 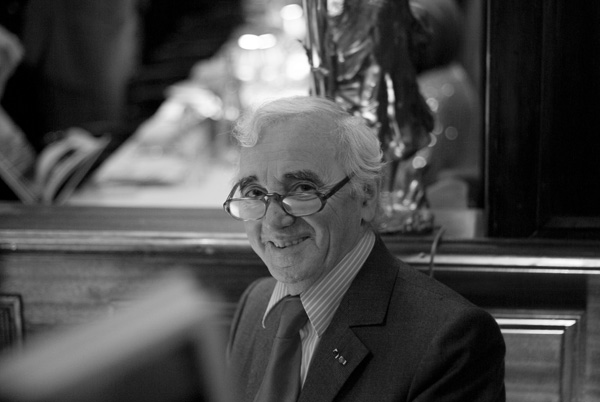 During my journalistic career, I had one principle, that if I am ever convinced that I need to interview someone that I would never, ever reject the thought in my mind no matter how hard to reach that person may be.

That helped me to get an interview in 1990 with the newly elected President of Hungary, Árpád Göncz, for Hayk weekly. Everyone would say, he is no longer a regular writer-playwright, Shakespeare translator. But the glorious Árpád Göncz, with whom we had a long conversation in Mihály’s palace, within the scope of translators camp, he created a half an hour window for me, between meetings with himself and the Dutch Prime Minister and the Secretary General of NATO.

In 1997, I went to Paris with Ar TV in order to facilitate negotiations with French TV companies, with the great help of Ambassador Michel Legrand.

Of course I thought that I would shoot the programs and bring them back, but the funds of the newly created Ar channel were very limited, the operator’s expenses were not paid, and the TV vice president (myself) was going to live in the house of a Diaspora Armenian poet Movses Bchakjian. I was forced to learn how to operate a camera… as much as I managed…in one week, because it had gotten into my head, that I had to interview Aznavour.

In Paris, I managed to do very important filmings, in particular an hour-long interview with a great artist Jansem, in his studio.

I would ask everyone that I met if they could organize a meeting with Aznavour, many of whom promised to inquire, contact the singer’s impresario Levon Sayan, but they did nothing.

I was very upset, but they justified saying, what do you mean? French television has been hunting him down for months, and they can’t manage, and Sayan guards Aznavour like Cerberus.

I asked that they send a fax, with a text that I had written… in a couple of days, 10 people wanted to come to the interview, in any case, my offer was accepted. Finally, I took Raffi Hermon Araks with me and went.

Aznavour had a grand concert at the Palais de Conte’s 4,000-seat hall. He accepted me in his makeup room. To be accurate, he was working when I arrived, he was writing and erasing something, ripping it apart throwing it in the trash, I was in the hall, I took a photo, then he came out.

And I had a problem. Our technicians set up a tripod with me, but they forgot the head on which the camera fastened. I tried to fix the camera on the tripod for a long time, but in vain, it kept slipping and falling off.

Then I got a screwdriver, there was no such thing in Parisian houses, I took the camera and tripod apart and put it back together again, nothing came from it. There wa a big screw at the base of the tripod and there was a hole with spirals in the camera… they were the same size.

As soon as Aznavour entered the hall, I lowered my camera and began to rotate and tighten the tripod.. Aznavour looked and looked and averted his gaze, perhaps in order not to shatter his ideas regarding television equipment.

I sat next to the maestro, and Raffi filmed us, sometimes including himself in the conversation from behind the camera. True, as the camera was turning from one to the other the little hinges caused the camera to go up and down, but it was an interview where Aznavour had spoken the most Armenian, at least, according to him.

Although the interview was in the format of my program “Trajectory,” it was filmed right before New Year’s Eve and there were many questions which had to do with that week, which had lost their urgency, while the Ar president Meruzhan Ter-Gulanyan broadcast the program 7-8 times, and one of the founding members of the TV company, artist Grigor Khachatryan, placed some of the shots to the soundtrack of a beautiful Armenian song sung by Charles and Seda Aznavour.

A link to the program.