The First Republic’s Press: “Eggs, butter, cheese, sheep and goats for the army!” 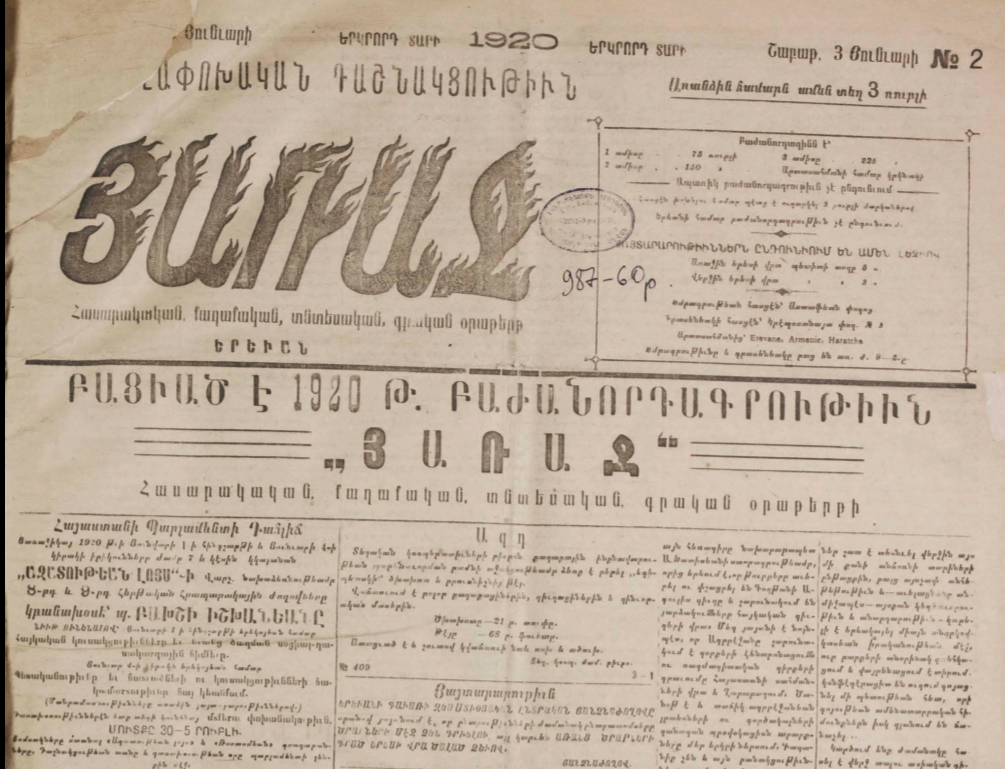 While looking through the press from the First Republic of Armenia, there is always an urge to keep checking, is the date on the newspaper 1918? Or actually 2018… Everything is the same. It’s as if 100 years have not passed.

“Our city (Yerevan) shines with its garbage exhibition. The wind spreads the garbage dump, of course, across the city. Horses, dogs and other animal carcases remain laying on the city’s many streets for days” (People, 1918, August 22, N3).

Today, only the children of vulnerable families are at the front line. But why only today?

The Letter From The Army presents the dissatisfaction of the soldiers serving in the military. They are faithful and risking their lives by serving, while there are some who are released from military service with incomprehensible justifications.

“There are families which have up to 5 people who are capable of serving in the army but are walking around freely, enjoying all the pleasures of life” (People, 1918, September 15, N10).

During the First Republic of Armenia’s 2.5 years of existence 60 newspapers were being published, of which 14 were official, 38 belonged to political parties, and 8 were independent.

The fact that the work of the parliament in 1918 was so public, that there were chairs in the hall for the public, is interesting.

“Recently society has shown great interest in Parliament sessions. Although the start of the session was announced at 7 o’clock, places reserved for the public were already full by 6:30” (Governmental Report, 1918, September 6, N2).

In the Armenian political field one of the most influential political party periodicals was Van Tospan, then The Voice of Armenia.

In February of 1919, the Soviet Republic organs were established in Yerevan, with the Socialist Revolutionary newsletter with the epigraph “you will have your rights by fighting.”

Unlike political party press, non-partisan and scientific press was expressed very weakly. They were published for a very short time, and due to financial issues, would close down. These included Alexandrapol News, Ideal, Yerevan’s American orphanages’ bi-weekly newspaper, New Way…

Readers of the Independent Socialists, Humanity newspaper were suggested not to put too much hope in European countries, especially England.

“England played a great role in the past in the tragedy of the Armenian people. From the perspective of its political benefits, it has been a supporter of Turkey since 1878, giving Armenians just a word of sympathy” (1919, April 5).

The political victory of the ARF Dashnaktsutyun in Alexandrapol in 1919 was questioned by the newspaper Humanity, noting that all the chairmen of the committees were Dashnaks.

To which the newspaper Shirak’s Worker responded with, “The Dashnaktsutyun victory in the Alekpol elections has been put into an uncomfortable position by colorless and selfish groups. Having lost their equilibrium, our already abnormal opponents try to discredit the Dashnaktsutyun, by means of throwing them from their position in front of the masses” (1919, May 14, N31).

100 years ago those who voted for the Dashnaks were calling for, “friends and citizens, give your vote to the ARF Dashnaktsutyun, N1.”

And they gave these pre-election promises.

The subject of dishonest “businessman” is not new. “On December 24 300 villagers appealed to me, claiming that the society grain collector of Tegh Village, N. Melik-Barkhudaryan and his assistants M. Balashyan and A. Babayan, collected the good type of wheat from the farmers while presenting the provincial food supply department with a fake (a mixture of dirt and mixed wheat). All three have been imprisoned” (Syunik, 1920, January 1).

In 2018, the roots of collecting donations, bricks or telescopes, warm socks and linen etc., for the army spread back to the First Republic.

Almost every newspaper had an announcement with the title Army Day stating, “Food will mainly be collected from villagers (eggs, fat, cheese, lamb, beef etc.) There will be a donation collection for money, socks, gloves etc.” (Shirak’s Worker, 1920, N76).

The story is repeated every 100 years. The witness, Publications of the First Republic’s Press.