The Impact of March 1st on the Field of Armenian Media 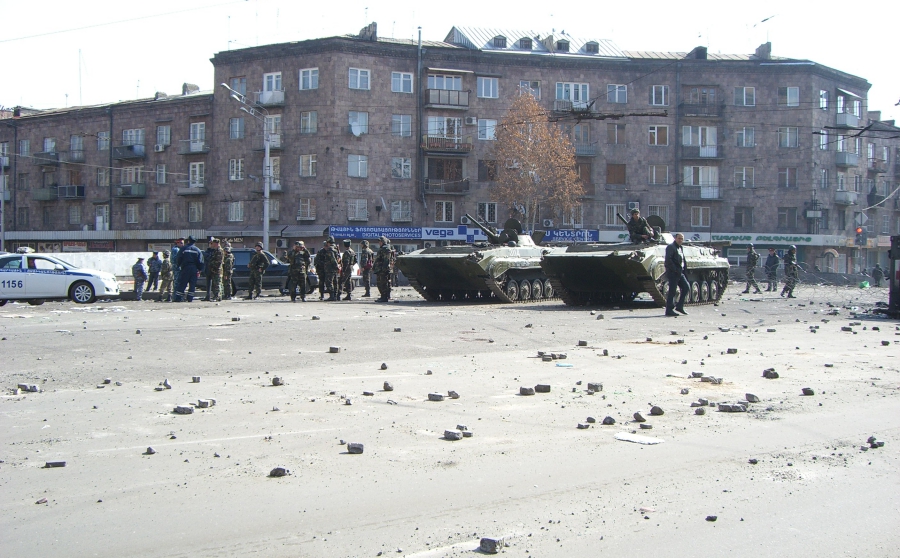 The events of March 1, 2008, the preceding political struggle and public’s actions, the state of emergency that followed, all had a great impact on Armenia’s further development.

March 1 also had a major impact on the media field. Since 2007, the Armenian online community had shifted towards internal politics. Two things are worth mentioning:

a.) Until the autumn of 2007, the main interests and subjects of discussion for online communities in Armenia and in the Diaspora revolved around foreign policy, that is to say Armenia-Turkey and Armenia-Azerbaijan relations.

b.) Social networks already existed, but they had very little influence. The online community was for the most part scattered across a set of Armenian forums and Livejournal.com blogs, although they were already beginning to develop across other blogging platforms like WordPress and Blogspot.

The engagement of blogs and forums in the political struggle, led to the the first crisis in the Armenian internet. As was the case of the Armenian and Disporan communities offline, so it was that the online communities divided into two major parts.

During this period, for the first time, the internet was used internally for the purpose of propaganda warfare.

Of course this was not an organized and coordinated struggle, rather it was based on spontaneous movements. However, it was this period of time which set the foundation for future Armenian online community wars. Here you can see the first discussion about propaganda blogs, (in today’s language, these blogs would be called fake). Both the original piece of writing and the discussions which follow in the comments section are suggestive.

The most memorable activity, which can be read about in international reports even today, was the blocking of opposition websites by the state, which took place on March 2.

Even YouTube was blocked for a few days (more details below). This caused a number of long term effects.

a.) Experience has shown, that similar restrictions do not solve the issues at hand. The Armenian public managed to quickly solve the technical issues and continued to read the inaccessible websites. In fact, the restrictions raised the public’s interest towards the internet even more. As a result, conversely, the number of visitors grew.

b.) The scandal which resulted from the restrictions affected international ratings and had an even more negative impact than the benefits which were expected from the censorship.

c.) Not only were certain websites banned, but a number of news outlets lost their domain names. As a result of these actions, an atmosphere of mistrust formed towards the .am domain which continued to last for several years. This caused, for example, the Armenian Times website to migrate from its hzh.am domain to armtimes.com.

Further political implications had yet another impact:

However, the wave of the opposition forces obligated the media to work more actively and continuously.

Below I present the schedule of internet restrictions, as prepared by the Human Rights in Armenia website.

The schedule of internet restrictions

On March 2, at around 11:00 pm,  internet providers (according to our data given by the NSS) began blocking the entrance of Armenian users to a number of Armenian media and opposition organization websites. 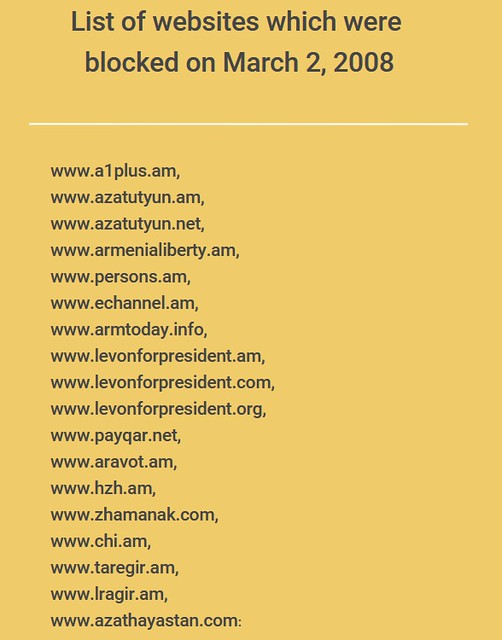 During the first few days, panorama.am and regnum.ru websites also disappeared for unspecified reasons, however they later began to work without any issues. It is important to note, that according to some opinions voiced in a number of blogs and forums, these two websites were also subjected being blocking.

During the first two days, the filtration was done chaotically, with different providers blocking different sets of websites.

On March 3, the Armenian Internet Union (AUI) already began blocking domains. Thus, blocked websites with a .am domain became inaccessible for people outside of Armenia as well.

Since updates were not being made on these websites by their moderators during the state of emergency, we can only assume that the NSS resorted to these measures so that even the archived materials would be unavailable to internet users from abroad.

Former member of the Internet Union Council, David Sandukhchyan, informed us that during the initial period, the AUI council members were not aware of these activities.

On March 4, the opposition website infoarmenia.org was registered, began operating, and was not blocked during the period of the state of emergency. This leaves us to believe that the restrictions were being made by non-specialists who did not really monitor the media field.

On March 5, YouTube.com was blocked, as the opposition began posting videos regarding the events which took place on March 1.

Since the authorities began to filter non-Armenian websites this time, their actions received a response from abroad. Information began to spread across blogs and forums which reported that the International Internet Society (ISOC) wrote to the AIU, stating that it was violating its obligations and may be deprived of its international membership.

As a result, the Armenian organization would be deprived of the right to register websites with a .am domain.

On the same day, the public had already begun taking practical measures to find ways of getting out of the internet blockade. The blog azathayastan.googlepages.com opened, which published blocked materials from Armenia Today and RFE Armenia “Azatutyun” websites.

During this period, internet users began to share various technical resources, which would allow them to visit the blocked websites (anonymizers, external proxies).

On March 8, the AIU finally informed the public, that it had deprived a number of websites from their domain names (the announcement was posted on their website).

On March 19, the blog xosqi-azatutyun.livejournal.com was blocked, where Armenians from abroad posted materials from blocked Armenian websites. Investigations conducted by bloggers found that the restrictions were being made only by the XTER.net provider.

On March 21, the restrictions were removed. During the first half of the day, the Armenian Times website was still being hosted  by the newspaper’s hosting provider at Web.am.