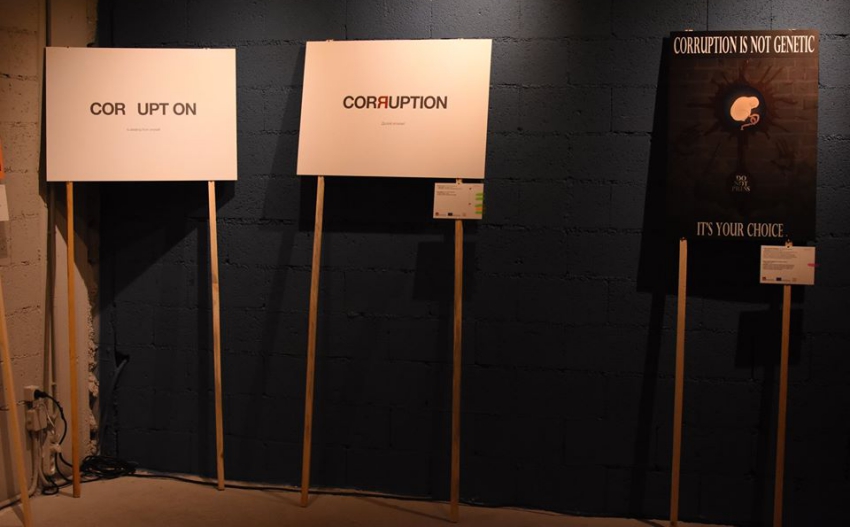 A good poster is like a good song: it’s hard to separate the message in words from the image just as it’s not possible to wrest the poetic foundation from a song’s melody.

Using the poster as a model of a laconic and concentrated visual message, one can identify the most current topics and concerns. Or, as was the case in the USSR, to convey ideological charged emotions to the public. And to stand up — in the name of a new, cleaner, and more luminous life.

With the financial support of the European Union and Impact Hub Yerevan, it was decided to talk about the consequences of corruption and the domestic revolt against it through posters.

The Art of (anti) Corruption Poster Exhibition became an occasion both to bring together artists and to talk about a difficult topic through an understandable and bright genre. 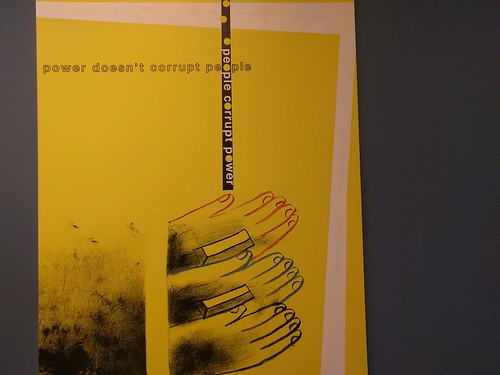 Exhibition curator, artist Samvel Saghatelian is sure that, after all, there is no topic more current than corruption: “Basically, corruption is a part of the human essence. Corruption is not just accepting or giving a bribe, not just plundering and money laundering. It’s a broader concept. People are corrupted, tainted by temptation. We know that the most important things — love, sex, and money — are linked and can lead to corruption.”

The posters, which were created by different countries’ artists, designers, and even journalists, are an attempt to talk about today through an influential genre. 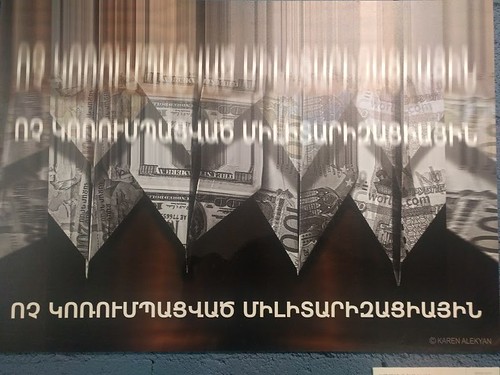 Corruption everywhere flourishes under the same conditions and is overcome with the same means of struggle. The starting point is public protest, which can play the role of a cleansing wave. Or at least help to realize there’s a need to be cleansed.

“Art helps you look inside yourself. You search for the answers in yourself. I myself don’t know: if I am brought to great temptations, will I resist or not? God knows,” says Saghatelian. 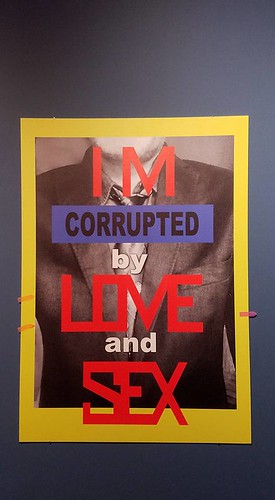 For this exhibit, 35 contributors created 64 posters. They are all very different. There are those that are simply slogan-like, contain a strong art element, have humorous games, are textual and reminiscent of visual puzzles, are in the form of graphic history, and rearrange slogans and classical works. 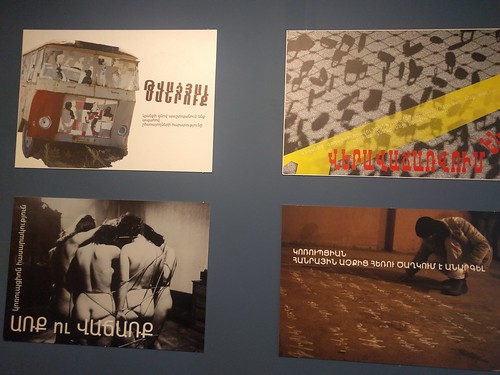 The chain of giving bribes is likened to prison hierarchy (to respect yourself, you humiliate and belittle another). There are also works based on personal thoughts. For example, a 14-year-old girl’s work “Corruption takes away our dreams.”

Saghatelian believes this is a profound and very topical message. “People have dreams. Much is said in the media that people should have big dreams, follow them, not be afraid to turn them into reality. Now this girls says, don’t take away my dreams.”

The word “corruption” in Armenia is often perceived as outside of us, a distant and foreign phenomenon. Polls show that Armenian society is tolerant toward one of the manifestations of corruption — bribery. Sometimes that’s considered though not pleasant, but natural, a regular part of life. 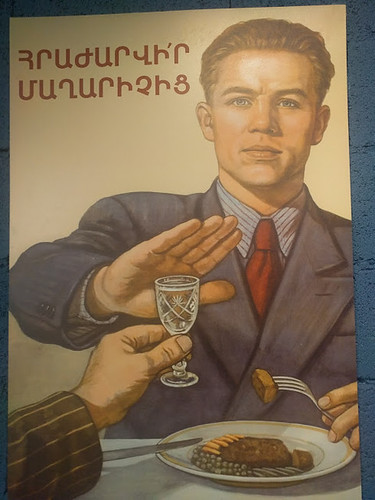 Saghatelian says: “Everything leads to not only a human, but also systemic problem. The system is created such that officials with their salaries can’t not be tempted. It’s impossible. And for this reason it seems that corruption is programmed.”

In many of the posters, corruption is depicted as being associated with eating, a play on the words “bribe-eater” [in Armenian]. The visualization of eating, digesting, and also vomiting, and getting lodged in the throat.

And in the most radical of the posters, with the realization that we must find strength to refuse this harmful “food,” since it simply damages our health. And not only our personal, but also public health. 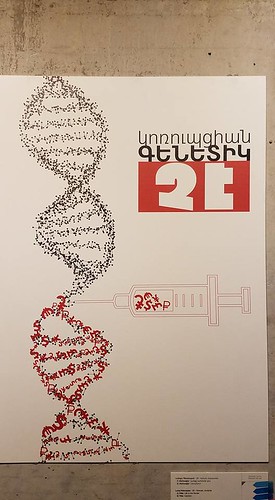 In general, the Art of (anti) Corruption exhibit is a very interesting study. The words and images are simultaneously in the arena of art and the media. They are mediators between the problem and its awareness. And they are often faster intermediaries than journalistic investigations or research conducted with the help of international bodies.

“We don’t know what effect words or remarks have. For example, we know that the large international Occupy movement began and spread widely through just one news article that contained the phrase ‘Occupy Wall Street.’ Then people took that and turned it into a large and contagious movement,” says Saghatelian. 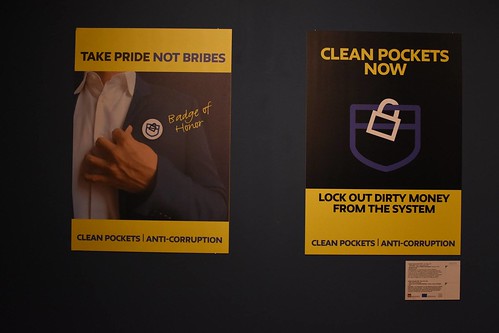 He believes that the impact of a poster can be bigger than long news articles or speeches, which get the modern person’s attention at most for 10 minutes.

Presumably these posters will continue their life not only in galleries, but also in larger public spaces. There’s the desire to actively share them. There will be the option to download and print all the posters — to later post them in villages, schools, on the street.

“A democratic model on the use of copyrighted posters will be created,” says Saghatelian.

In any case, contributors are ready to forfeit their copyright in the name of the public right. By the way, the poster presentation format itself hints at the future uses. Many posters are attached to wooden rods — a reminder that they’re meant to be carried at rallies.

Ultimately, the Republic of Armenia has declared a fight against corruption, at the highest level, through a state committee created specially for this purpose. And it’s natural to wait that the government itself will use these posters, to make the fight more visible.

For example, it will hang them at busy intersections, in public transportation, at the entrance of, inside, or on the facade of city hall or other state or administrative institutions.

Many posters are already designed and implemented billboards. They are simply not commercial, but social ads.

Public spaces now are also the social networking sites, where to be present there is no need for money for printing or other expenses. 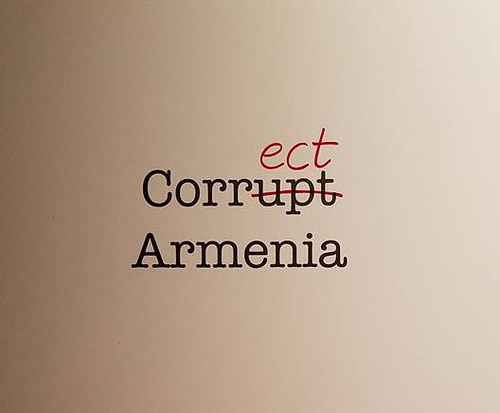 Placing a preferred poster on the social media pages of state institutions may be viewed as a sign that the state is on top of the reforms it declared.

“Corrupt Armenia” easily becomes “Correct Armenia.” Only three letters are changed. Add to that — the will to change.