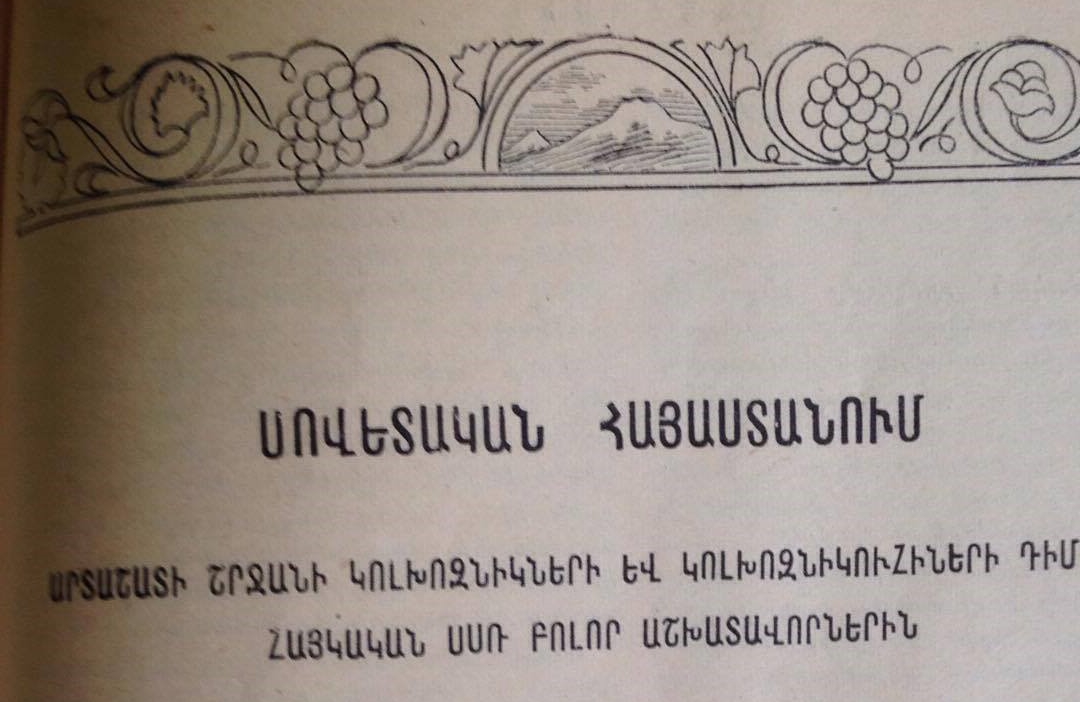 Every schoolchild in Armenia knows certain things about Artashat. For example, that Artashat is in Ararat marz (province), that it is now the provincial center, that it was the capital of the Kingdom of Armenia in ancient times, that it was founded by King Artashes I.

We even know a few things about Artashat’s old theater: it flourished during the reign of King Artavazd, who staged and directed theatrical performances.

But I really didn’t know about the kolkhoz (collective) farmers of Artashat’s 1946 appeal to all Armenian SSR workers. More interesting was the fact that I found this appeal in the Mother See of Holy Echmiadzin’s official magazine Echmiadzin.

In the April/May 1946 issue, we read: “The Sovnarkom [Council of People’s Commissars] of the USSR adopted a special decision allowing Armenians abroad to return to Soviet Armenia. This decision was a new expression of the Bolshevik Party, Soviet government, and Comrade Stalin, personally, for the Armenian people.”

The article then describes the great Soviet leader’s extravagance, stating the large sums of money that the Soviet state provided to accommodate repatriates.

Artashat’s kolkhoz farmers, allegedly by their own initiative, appeal to the Soviet country’s workers to collect money for the repatriates. Specific numbers are cited. Their appeal also notes that more than one million Russian rubles has already been collected. “Just 12 collectives of workers and employees in Yerevan’s Stalin region allocated 630 thousand rubles to the fund.”

The appeal ends with “Long live our great nation, long live our glorious Soviet government, long live Lenin-Stalin’s great party! Let creator of all our victories, native father of the Soviet people, our wise leader, Great Stalin live many long years.” The appeal letter is signed by several kolkhoz chairs and farmers in Artashat, and one teacher.

In the same issue of Echmiadzin, Armenian workers’ enthusiastic response to the appeal follows: “Immediately after work, the employees of the oil and soap factory got together and discussed the kolkhoz farmers of Artashat’s appeal.”

Echmiadzin republished the appeal from issues 81, 82, 83, 84, and 85 of Sovetakan Armenia in 1946. But a reader of the magazine, if he didn’t know the Soviet country’s current situation, would be at a loss to find a connection between the kolkhoz farmers of Artashat’s appeal and Holy Echmiadzin’s official magazine.

A second puzzling fact: how a rural population upon its initiative can urge the workers of the entire state to raise funds, and all the industrial enterprises, academy of sciences, the academic theatre, and other large, medium, and small institutions of the country immediately call meetings to respond to a call to action organized by a few villagers and peasants.

Or they may think what prosperity repatriates have begun to live in in Armenia, when the Armenian SSR population by its own will has collected such great sums for them — the numbers really do speak for themselves.

But that bewilderment will be the bewilderment of those who won’t be familiar with the content of a fantastic fictitious country that has had a long existence in the past.

This does not threaten us. But seeing the kolkhoz farmers of Artashat’s appeal in Echmiadzin will bewilder even us, those who witnessed the last years of that state. Though short-lived.

Our church has always been destined either to be a substitute for the state or be utterly combined with it.

Whereas the press was the press even during rough Soviet times and fulfilled its role. Ideological Soviet society read the newspaper. A more or less literate person had to read the articles of the party press, had to be aware of all the decisions, the content of the leaders’ speeches. This 1946 article created in the country a great illusion of the country’s concern of the well-being of repatriates. Besides, the press publicly created the illusion of a big nationwide fundraising campaign. Articles in the Soviet press confused, to put it mildly, also repatriates. With such articles, the press created the delusion of a prosperous life for those deciding to repatriate. More specifically, it deceived them and people made fateful decisions.

As a rule, the arrivals’ first big shock was connected to the living conditions, to the absolute lack of prosperity. In this regard, the press did its “job.”