Creeping Penetration of Censorship from Cinema 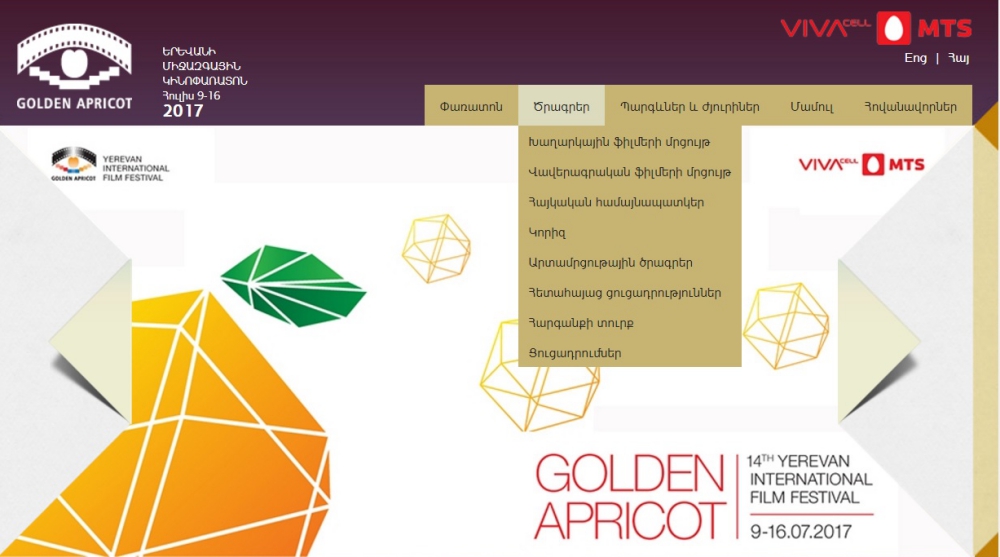 Two days before it was about to start, the Golden Apricot Yerevan International Film Festival (GAIFF) cancelled the program “Armenians: Internal and External Views,” explaining that “it was forced to do that.”

This program traditionally presents films that have some Armenian participation, subject matter, or production but in the qualifying stage were not included in the main Armenian Panorama contest. This program with quite modest views was an opportunity for filmmakers to be included in the line-up of film screenings and for festival-goers to get a general idea of the films that replenish the storehouse of Armenian cinema every year.

The Union of Cinematographers of Armenia refused to screen two out of the 37 films in this program in its Henrik Malyan Theatre of Cinema Artists, justifying its refusal with an abstract public protest and lofty nationalist morality.

After the death of Union of Cinematographers of Armenia Chairperson Ruben Gevorgyants (with whom Golden Apricot had a verbal agreement), the union is in utter disorder: presumably, there’s a fight for the chair’s seat, and before that fight is even formulated, the team has decided that it’s time to think about the moral image of the Armenians, “who adopted Christianity first,” and prohibit “films that pertain to perversion.”

In any case, the union’s refusal is guided by such calls:

“This is propaganda for perversion, since it attempts to turn perversion, which is impalpable, unacceptable, and ‘refusable’ for all moral people, common, perceptible, and acceptable.”

Of course it doesn’t cross the mind of the author of such letters and calls that if, for example, a film is about war that doesn’t mean that it preaches war. Or if the film’s main character is a bribe-taker, then bribery is being preached.

But that doesn’t matter, since public complaint letters, as a rule, are sharply emphasized on the unconscious surface and usually speak on behalf of the nation or god. And never from a personal position.

The union offered to Golden Apricot to reinstate the program if those two films were removed. But festival general director Harutyun Khachatryan decided to cancel the entire program and not divide the already complete program, explaining his move this way: “For 14 years we’ve worked and we’ve never had an instance of pressure or interference from neither the ruling authorities nor partners nor sponsors.”

GAIFF representatives informed us that they no longer have the time or the resources to rent another venue for the screening, since the program is 40 hours in length, and there are limited movie theaters in the city.

In Armenia, this news caused an uproar, since GAIFF unwittingly touched upon an unpleasant and guarded subject: censorship and being oblivious to self-censorship. There was even a suggestion to boycott the festival, which legitimized censorship.

Of course, the best and vocal move would be if GAIFF announced that, as a sign of this attempt at censorship, it is cancelling the entire festival, and not only one program. But doing so is not realistic at this stage.

GAIFF, with the various reproaches and criticism against it, continues to be sometimes instigator, sometimes accommodating, but still a platform for the most interesting thoughts.

And perhaps this year the festival received a piece of the role of reminding us of the danger of being accommodating. The festival made its move: it drew attention to a program that traditionally took place in a half-empty hall and forced us to think that many things in our country are not as they should be in normal developing countries.

Protection of freedom of speech and self-expression is daily work. And everyone’s work.

The various degrees of restrictions, pressure, and censorship attempts rise from nationalist, theological rhetoric and surely lead to emptiness of thought.

First, two films are banned, then three, then thought itself is put under lock and key.

Why think if you can be subjected to the collective unconscious current: persecute someone who is not like us, and with that justify your own righteousness?

And it’s desirable not to forget that all acts of meanness began from collective letters, which urge people to be united and deal with any phenomenon. And it doesn’t matter against whom or what: dissidents, LGBT people, doctors, or people with black eyes. What’s important is being against.

Society itself has to decide what to do with this experience, which cinema people provoked. Choose the many colours or the gray?