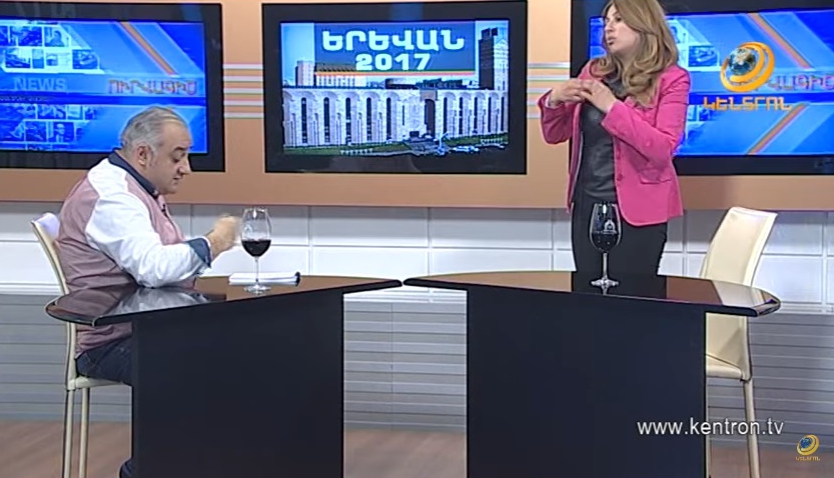 Yerkir Tsirani (Land of Apricots) party leader Zaruhi Postanjyan has accused Petros Ghazaryan, the producer and host of the talk show Urvagits on Kentron TV, of a violation of ethics.

On the April 17 broadcast of the show, Postanjyan wanted to leave the studio. She didn’t like Ghazaryan’s questions on the ELQ political party and Nikol Pashinyan (ELQ and Yerkir Tsirani are competing parties in the Yerevan municipal elections).

“I’m sorry, no, I’m going, I didn’t come that Pashinyan’s… I asked you not to ask questions about Pashinyan,” said Postanjyan in the studio, standing up and trying to remove the lavalier mic.

“No, let’s go. You do it again and I’ll leave,” retorted Postanjyan.

It’s possible that certain segments of this filming weren’t aired, since the transition to the next part of the conversation is bumpy. Ghazaryan repeats, “Fine, we’ve moved on from Pashinyan.” “We didn’t move on from Pashinyan, we’re doing it again. We’re beginning again… from Pashinyan voobshche [at all]. And don’t ask questions of ELQ either voobshche,” says Postanjyan.

Ghazaryan’s following question is about the Yerevan municipal elections. “What city development programs are you going to propose?”

On April 18, during a meeting with journalists in Erebuni, Postanjyan addressed this incident and accused Ghazaryan of not being professional. If they give the same question in the same broadcast several times, it’s both a violation of ethics and a lack of professionalism. And I said, yes, please don’t ask that question anymore.”

Shortly thereafter, Ghazaryan responded to Postanjyan in a Facebook post. “Instead of complaining of journalists, our politicians must learn that the questions they dislike will likewise be raised and to be somewhat prepared of them before going on air. In this case, first, the same question is not repeated, and second, if the question is not answered, I can ask the same question 10 times. Professionalism and ethics have nothing to do with it.”

I don’t know what Postanjyan and Ghazaryan agreed in the studio about this segment of the broadcast. Did Ghazaryan promise that questions about ELQ and Nikol Pashinyan and the line “Fine, we’ve moved on from Pashinyan” wouldn’t be aired? But there are three points on professionalism and ethics that I must mention.

Promise is a journalist’s weapon

If Ghazaryan promised not to air the segment with the incident with Postanjyan and he aired it, then yes, there’s an ethical issue here.

Questions don’t have a limit

Postanjyan can recall the number of times in parliament that she’s been forced to ask the government or the Republican Party of Armenia elite in the National Assembly the same question in order to get an answer. And she was right to do so.

There are questions that must be raised — and the questions about ELQ at the Urvagits studio are among them. So, there’s no question of professionalism here. On the contrary, Ghazaryan was being professional by asking those questions.

Equal treatment of all guests

If a journalist has principles, he has them always. Perhaps Ghazaryan is trying to be the same professional in all cases and with all guests. But it’s interesting: if instead of Postanjyan, there was another, let’s say, “inviolable” politician, would unpleasant questions be asked of him? Or would the attention-grabbing bizarre behavior of the guest be broadcast?