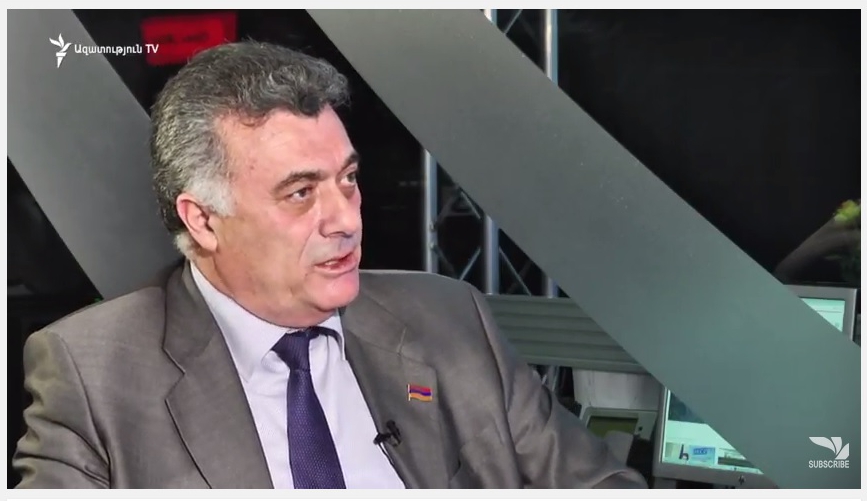 Although MP Rubik Hakobyan does not clearly state it, from his words it is possible to understand, that yes, he has hit “Hraparak” journalist Vahe Makaryan and yes, he was pleased with his actions.

The MP states his behavior “was based on the defiant behavior of Vahe Makaryan.”

“There was no journalist on the other side of this incident, it was a hooligan, and I’ve tried to prevent his future activities,” announced Hakobyan in Parliament.

The MP, who is a graduate from St. Petersburg State University’s Faculty of Journalism, carried out a counterattack.

When I was writing this article, he was discussing on “Azatutyan” live television who a journalist is and who can practice journalism. He was saying that a citizen can refuse to answer a journalist’s question. In reality the MP can also refuse an interview, clearly aware, that he is not an ordinary citizen. But in the hall of the Parliament, Hakobyan answered the journalists’ questions with his own free will.

Today Rubik Hakobyan is busy spreading his satisfaction with his behavior throughout the media field. This is the most dangerous development of the incident. Since the behavior of the MP can set an example for his colleagues. And it can seem that officials themselves decide who is a journalist and who is not, and decide, seemingly under the influence, to pull an ear? Attack? Or, just curse?

When talking about the cases of violence against journalists in Armenia, one word can be used: “impunity.” Of course, Hakobyan is pleased with himself, since before him no MP who cursed and threatened journalists working in Parliament, and no one who attacked journalists covering the Electric Yerevan or Sari Tagh demonstrations, have ever been punished.