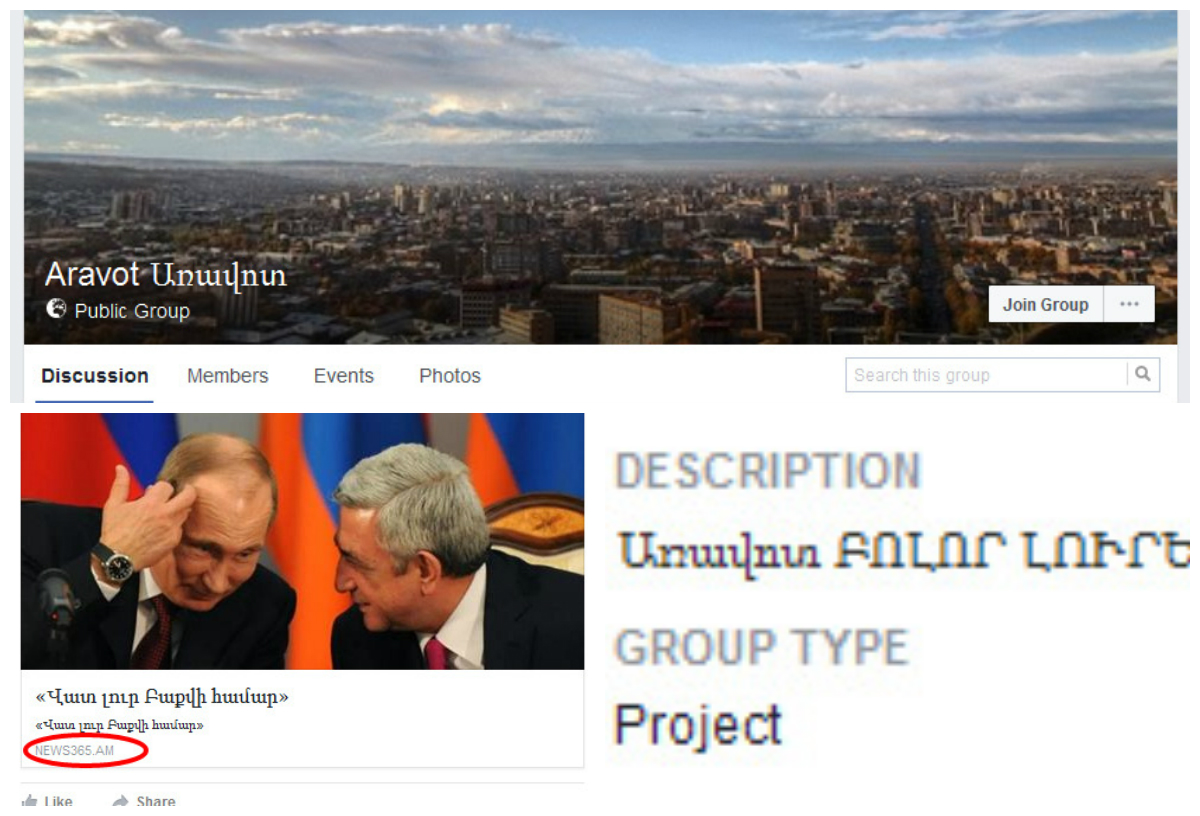 Over Facebook, a journalist sent a reference to a group named “Aravot” and Aravot.am, with our real Facebook page’s photo, which at that time already had over 5000 members. The group, which uses our media name, had no connection with “Aravot.” Through the group, they were basically spreading materials from a specific site, semi-erotic, semi-tabloid style. The “All rights reserved” warning text on this website is also republished from other media materials, in violations of the provisions of copyright, with no references in the title, no active links… To sum it up, the group using our name were advertising things that are against the professional principles of “Aravot.”

Naturally, we first complained to Facebook that this is a violation of our intellectual property. We received a response that our report is being evaluated.

While Facebook was undertaking the promised review, I tried to find the people who established that group, with a naive hope that explanatory work would give faster results.

The website, that spread materials in that group, does not provide any information about itself, no address, no phone number, no person in charge or editorial data.

I contacted a member of the “For the sake of honest journalism” group, hoping that anyone might have information about that website. Through my colleagues it was successful: the domain was registered with a specific person’s name and fortunately the phone number was noted.

I was not careful, I did not notice that the person whose name the website domain was registered under was also the person who created the group though there were 11 additional administrators. During the phone interview he suddenly denied that he established the group. After listening to my complaint that they were using our name and photo, he impassively stated that we won’t reach anything on Facebook with our complaint, this is not a page, but a group, which could have been opened by the fans of “Aravot.” He also added a twist, that if we pleaded, he would give permission to spread “Aravot” news in that group.

It would seem that there was no other choice other than approaching lawyers and beginning legal proceedings. But while being involved in that long-term dispute, I decided to tell the group’s other 11 administrators about the offense. Only two responded, the rest were pretty-faced girls, whose workplaces were noted as BEAUTY & SPA, Designer Mode, some of them were clearly fake.

One of those who responded was also the website’s editor-in-chief, who claimed he did not know who the group belonged to, they simply posted materials in that group.

The conversation with the other person who responded was more heated. “Please, tell me where it is written that it is forbidden by law to establish a Facebook group and make it similar to any website,- though with transliteration, but he wrote this text with many mistakes.-  Are you generally familiar with legislation?” Basically, the conversation was continued meaninglessly, but still I warned that the next day that I would approach lawyers.

Late in the night I received another message from them, which informed that “I removed the section about you, it is not as if the group’s members formed the group for your brand…Regarding the law: my good advice to you is just that you cannot solve the issue with the law, because our laws are written in such a way, that they are not applicable to the virtual domain. This is my goodwill, I hope that you will understand correctly and will thank me.”

They changed the photo, removed the am part of the name Aravot.am. But in that group’s address, the Aravot.am name is now protected in the link, and even if they want to, they cannot change it, Facebook has arranged it as so.

In reality, after rewriting this longer lasting and more nerve-wracking story I want to ask our colleagues in media organizations, who criticized the media editors, who demanded in a statement, that by law it should also be clarified that those who claim to act as the media publish the necessary data: in this case, what should our media have done, that it did not do, how could we have protected our name, from these “parasites” that are collecting readers?

The “Trademarks and Service Marks and Appellations of Origin” law was adopted in May 1997. And, naturally, during that time the internet was not very developed in Armenia, and the law does not provide appropriate regulations for website trademarks as well. Therefore they comfortably throw out the copyright since “our laws are written in such a way, that they are not applicable to the virtual domain.”

But if after this story I say that appropriate changes in this law is a priority need, will our respected colleagues again counter that you cannot allow journalist-beating authorities to establish regulations–especially on the internet, that they will use that with the intent of censorship? Therefore they are strongly against legislation that regulates the media. And in that way we provide a “green light” for plagiarists and those who use our names and our work.