Meaning of Cardboard Attack Was Counterattack 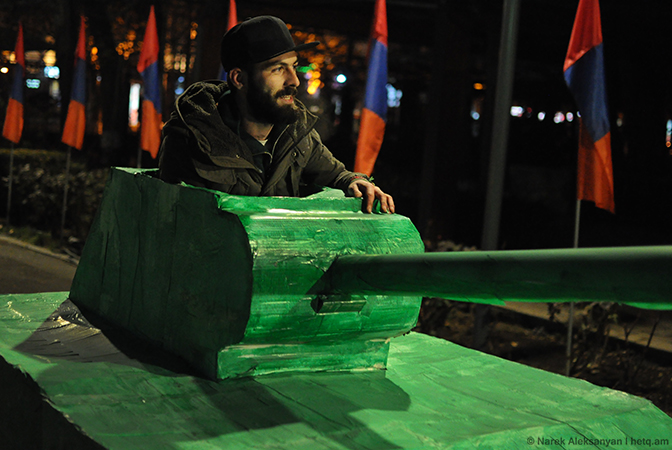 When a green cardboard tank crossed the streets of Yerevan on Dec. 10, 2015, very few people noticed it. The “handmade” cardboard shell, made to look like a tank, wasn’t an automobile — artist Artak Gevorgyan wore it like one wears clothes. And he walked the streets with the tank, aiming to reach the National Security Service (NSS) building and crashed into its iron gate.

The idea of the game (in this case, the art) was clear and happy: cardboard can’t damage solid iron and so, from the start this “striking” intention was planned as a test, as a demonstration, whose meaning would be complete with a reaction. That is, the reaction of law enforcement agencies.

And this reaction didn’t wait.

The happy, green tank was a small, demonstratively personal display. Six months ago, it received scant attention: people, seeing the tank-person, approached and took selfies with the green toy in the backdrop. Information about the tank was spread when photos of it appeared on social networking sites. People were interested in not so much the purpose of the demonstration, but the fact itself (a colorful event happening in the city).

The media too addressed the tank’s appearance only briefly. After all, nothing had happened, apart from the fact that a person had contradistinguished himself from a powerful state institution and at 1:30 am had crashed into the NSS building gates, protesting abstract “injustices and disorderly political situations,” as a result of which he damaged his tank and left the scene.

Gevorgyan left his green “armored vehicle” outside the NSS gates. The next day Alfa special forces detained him with two of his friends. And from this point the abstract injustices became concrete — but didn’t escalate.

The media likewise passingly reported on the crash and detaining artists; many media outlets didn’t even see the point of reporting the news and silently ignored it as a secondary story.

But half a year passed and Hakaharvats [“Counterattack” or “Counterstrike”] art group member Artak Gevorgyan found himself in a much more scandalous and, by and large, political situation. Now it was a serious event, which the media could no longer ignore. Gevorgyan sat in the accused’s chair and the first court trial took place.

And with that, the artwork achieved its goal. It entered the media realm and became an ongoing opportunity for public debate.

The charge against the artist is itself already an artwork.

He is accused of “grossly violating the public order, which was done by disrupting the normal activities of the employees carrying out security services at the NSS building and by causing a feeling of fear in them in connection with protection of the property.”

It should not be forgotten that the tank’s material, model, and generally visual appearance left no doubt that it is a toy. That is, those who confuse it with a serious armored vehicle are misguided. And those speaking about serious losses are the misguided who are bold to the point of absurdity.

Neither fear for property nor violating the public order can compete with the formulation of charges whose meaning is completely ridiculous. It has been declared that Gevorgyan “demonstrated blatant disrespect toward the public.”

Actually it’s the complete opposite: it’s by respecting the public that he built his tank with cardboard over several days, painted it green, wrote on it “Artak has his own tank” and came out on the streets of the capital at night, heading to an “attack” position.

Art is always respectful because if it attacks the right target, then the huge state machine begins to convulse and try to invent incriminating statements, relying on the legislative code.

In this situation, it’s very important to understand that any artwork aspiring to be contemporary (and this happy tank is an artwork, together with the character of a tank operator) is “fed” by people becoming co-participants in the work. If the demonstration went unnoticed, then it wasn’t a complete demonstration. But when a reaction occurred, the artwork came into being.

And it came into being first of all as a series of questions.

The questions are diverse: the fundamental rights of freedom of speech, self-expression, free movement, and ultimately, the right to ask questions.

Freedom of speech is not only a subject for art, but also a necessary condition for the creation of art.

A person complains against the security service, and the security service turns it into a legitimate complaint, since it begins to judge the artist according to the legislative code. And with that, it enters the realm of art, which in this case is broader and includes any media attention, video, or written text.

When media outlets write about the court case launched against the tank’s creator, they unwittingly become participants of a media demonstration, emphasizing the fragile surface area of the friction between the toy device and law enforcement agencies.

Art can take place today only by artists working autonomously, since when it comes to any state-commissioned work, the public sense for critical perception is blunted.

This demonstration of art was prepared scrupulously, while the ‘punitive machine’ was put into play without thinking long and hard (machines generally don’t think).

In any case, it was a good opportunity to admit that contemporary art always relies on the media and is always political. But the political tint is provided by those who react to the work. And if the artist is suddenly sentenced to imprisonment, art will swell, expand more, and one day will become one that dictates. Just as how specially physically trained agents and police officers now dictate.