Media Events in Armenia in 2015 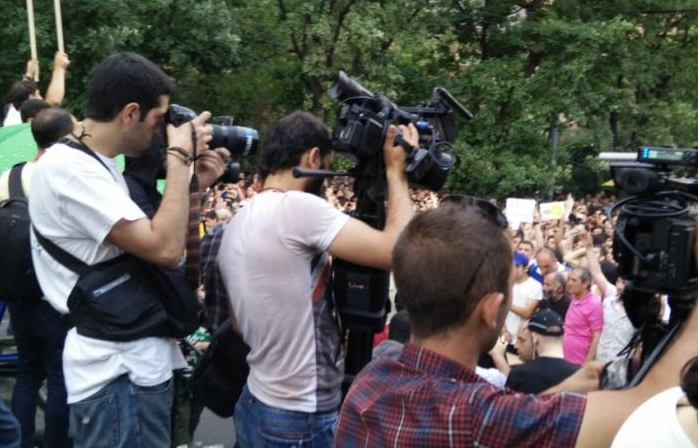 The world’s attention on #ElectricYerevan was due also to the special actions of the police against journalists.

Armenia captured the international media’s attention on a few occasions in 2015. In this respect, it was arguably an unprecedented year.

The year began with the murder of the Avetisyan family in Gyumri, which resulted in numerous reports by Russian and other international media. The Armenian public was displeased particularly with the biased work of the Russian media.

In April, Kim Kardashian visited Armenia, and the number of media reports about Armenia drastically increased worldwide. And when Kanye West gave a free concert at Yerevan’s Swan Lake, and then jumped into the lake, the Internet discussed and debated about Armenia in real time.

The centenary of the Armenian Genocide undoubtedly was the biggest and most important media event for Armenia in 2015. Major international corporations’ interest in the Armenian issue peaked on April 24 and 25.

The protest demonstrations in Yerevan from June 19 to July 6 against the electricity price hike (that became known as #ElectricYerevan) were domestic events that were covered and analyzed in the foreign press.

The world’s attention on #ElectricYerevan was due also to the special actions of the police against journalists. On the early morning of June 23, the police, using armored water cannon trucks, dispersed demonstrators. That morning, police officers beat journalists, broke video and photo cameras, seized journalists’ professional equipment and memory cards. As a result of the police operation, 13 journalists and camera operators were physically attacked, and the lawful professional activities of 15 representatives of various news media were obstructed.

The second big wave of obstructing journalists’ work happened on December 6, during the day of the referendum on the constitutional amendments. In at least a dozen cases, journalists were physically assaulted and their lawful professional activities were hindered.

The Constitutional Court was forced to uphold the media’s right to protect its sources. The reason was a case discussed in Armenia’s various courts since 2014, in which police investigator Garik Begoyan petitioned the courts to oblige Hraparak newspaper and iLur.am news website to reveal their sources.

Online advertising in Armenia began to be sold not on a monthly basis, but according to number of impressions.

Review the media events in Armenia in 2015 also with the help of the timeline below.