How I Gave an Interview to Russian Channel ORT 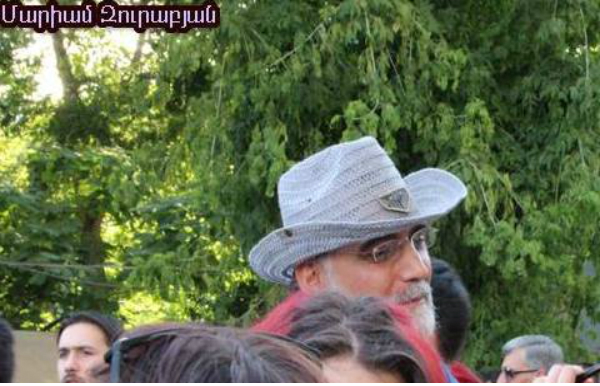 ORT is Channel One Russia, which I, like everyone else, call in my mind with its old name (Russian Public Television, ORT). The headline in Mark Twain style, however, was dictated by the extraordinary situation.

I came to Yerevan’s Liberty Square the evening of June 23 to help demonstrators who were dislodged the same morning from Baghramyan Avenue through water cannons and assault, when I was asked to give ORT an interview.

I greeted my good friend Levon Grigoryan, the ORT evening camera operator, after which the journalist and the people surrounding us began to prompt me, to tell me what to say. That the Americans didn’t organize the movement against the electricity price hike, that the protest is generally not provoked by anyone. That much corresponded to my perceptions, and I gladly nodded my head.

Then almost like a demand it was suggested to deny the political component of the movement. Regarding this point, I said I’ll say what I want. That froze the enthusiasm of my advisers. We all became serious so Levon can film.

And at that moment someone pointed out that I’m wearing a cowboy hat with “By Pill Mill” written on it in English. They asked me to remove my hat; otherwise, verbally I’ll deny that the Americans are organizing a “color revolution,” but my appearance will convince millions of Russians that the US has sent rangers to Armenia.

A cowboy hat has a particular feature: it forces its wearer to raise his head high; otherwise, he can’t see anything. I figured I’ve reached the age of maturity to be able to raise my head high without auxiliary products, and I removed my hat. I said that the young people’s spontaneous initiative is a holiday for me. And if we are all as resolute as these marvellous young people in protecting our rights and deterring the looting, the coterie of oligarch officials will be forced to retreat.

The interview was not broadcast. None of the participants was given a chance to speak; only news of 11 injured police officers was announced, which I also heard on Armenia TV yesterday. Probably it was information from the police, but it was stressed that the electricity fare hike is only an excuse (formal reason) for agitation.

How did Vremya know that this protest is a prelude to revolution, from what source? What obliges Vesti program correspondent Vitaly Arutsyunyan on the same day to say (01:05) that “the enraged crowd attacked police; as a result, law enforcement officers were forced to use water cannons.” What goal does Kremlin-close political analyst Sergei Markov pursue, writing on his Facebook page that “dozens of trained militants are breaking through the police wall”? And his raving gathers more than 200 “likes”.

I have two theories. The current Russian administration and propaganda

(a) is organically able to perceive the world only in light of Russian-American conflict
(b) through misinformation inspire the Russian populace that there are centers of strong pro-American opposition and resistance in Armenia, in order to justify any Russian, including military, intervention that is beneficial to them at some point.

In both cases, I removed my hat in vain; it’s all the same, they’ll say whatever they want, as they did in 1988 and in the distant Soviet years.