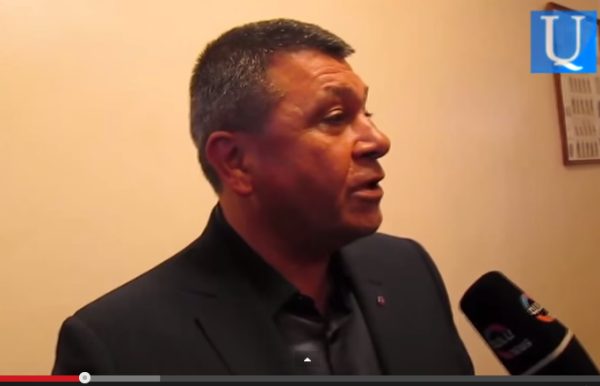 Only one part of this interesting conversation was covered by the press. The following dialogue took place on May 20 between a journalist unknown to me and RA Police Chief Vladimir Gasparyan who was visiting Gyumri.

The police chief had said that the victims of a brawl that included Syunik regional governor’s son did not come forward for three days, adding: “Our society has to stop having a ‘criminal mindset’. When they beat or are beaten, [they say,] ‘We won’t talk; you go find [the culprits].’ You won’t talk and we won’t find [them].”

The journalist remarked: “The criminals are among the ruling authorities; that’s why the public continues…. Surik Khachatryan is the best example.” Gasparyan interrupted: “There are no criminals among the ruling authorities, but people who have [this] mindset are everywhere — among both journalists and us… You, we, and the others are an integral part of our society. What, you don’t have any bribe-taking or rogue journalists? If you like, I can bring forth a dozen [of them] before the courts in 15 minutes.”

This much was reported by the media. And there’s no question of objecting Gasparyan’s remarks, considering that just recently several journalists were called to account for cases of fraud and extortion. And definitely their number could be greater if  those instances of media corruption that we in the profession are aware of were made public and acted upon. And we’re not even talking about “fake journalists” who, presenting themselves as some news outlet’s correspondent, try to “make money” especially in the regions.

But the journalist questioning the police chief objected, insisting that “80% are financed by Baghramyan 26 [the president’s office]; they’re the structures operating under the patronage of [Armenian President] Serzh Sargsyan’s son-in-law… Yes, I know about that very well.” The aforementioned objection and Gasparyan’s response that if she knows, then “I can accept that statement, and you might not be able to get out from under it tomorrow” were not published.

This style of questioning appeals to the majority of people. Oh, you’re so bold and courageous, you hear every time when qualifying adjectives and characterizations about the authorities are not spared.

But let us return again to the eternal dilemma: is a journalist’s task to report, to convey the views present in public and political life, or to assume a side in a debate? No, of course, it’s understandable that we all have our political preferences and sympathies, and sometimes it becomes quite difficult not to express them.

For example, no matter how much space I provide to those who defend Surik Khachatryan, I would never dare to consider myself unbiased where he’s concerned. It was the same also in the case of foreign-language schools. And the list goes on. And in the past, my preferences were more glaringly reflected in my journalism work.

But something changed when once, due to certain circumstances, I saw an opposition figure drink a toast to a member of the ruling elite, saying he’s proud that he’s his contemporary. On another occasion, I witnessed key opposition members circle dancing with ruling politicians at the party immediately following the opposition rally.

Not long ago, before “[Prosperous Armenia Party leader Gagik] Tsarukyan” and “[Armenian President Serzh Sargsyan’s son-in-law Mikael] Minasyan” news outlets, figuratively speaking, they were gnawing at each other’s throats: accusing each other of everything under the sun, these two politicians greeted each other so warmly when they met, it’s as if they had found their long lost brother.

We journalists are simply propaganda “cannon fodder” for politicians: we provide the “artillery preparations,” after which they quietly solve their own issues.

Political figures can argue and reconcile, and he who treats this all with strict enthusiasm will be the “bad guy” in the end. Of course it’s a matter of personal choice, but if one is unable to look at the big picture, it’s also definitely not worthing taking sides.