Once Again on Demanding News Outlet to Publish Retraction 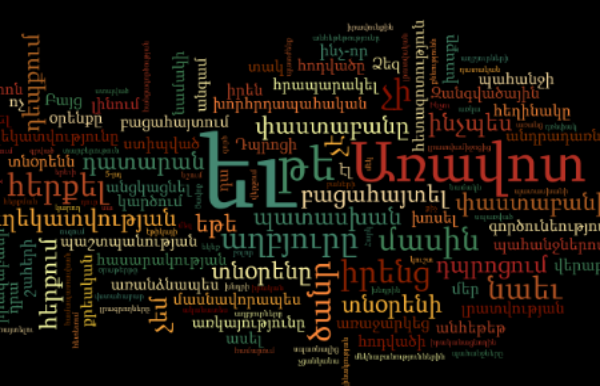 We’ve spoken about this issue on various occasions, but it’s all the same, when a news outlet publishes something that someone doesn’t like or that person feels offended and wants to respond, his or her first remarks are “Who told you that?” (if the source is confidential) and second, “We know which bastards are responsible for that news” (without denying the facts), and third, “You’re all sell-outs”…

Unfortunately, very rarely does the news outlet receive a normal response or refutation in accordance with the law and decency norms.

Local daily Aravot published an article titled “School Principal Offers [News Outlet] to Conduct Investigation” [AM]. The reporter who published the piece adhered to the rules of ethics (by maintaining impartiality) by publishing the claims by those complaining that the school is collecting money from the parents (but not publishing their names, according to their request) and getting comments from the principal, who denied the allegations.

It seems as if that would be the end of the story. But no… It turns out that even in this case the school principal is dissatisfied: she probably thought that only her remarks would be published.

I won’t address the comments that were left beneath the article after it was published online. I won’t even address the phone calls (full of curses and threats) that the reporter of the story received. What was most surprising for me was the letter [AM] a lawyer allegedly representing the school principal (that is, an advocate who seemingly was aware of the laws) sent to Aravot.

Just reading the demands in the letter, one is amazed: didn’t this person think about his reputation as a lawyer? Didn’t he realize that with these demands he is casting doubt unto himself and his knowledge? See here: “Please publicly retract the information published [in the article] titled ‘School Principal Offers to Conduct Investigation’ on 20/20/2015 [sic, should be 20/02/2015], as well as reveal the source of the aforementioned information.“

Let’s explain to the lawyer the absurdity of his request: if he is asking to publicly retract the information and not specifying what should be retracted, then Aravot would be forced to retract the fact that it also spoke with the principal, that the principal denied that such things happen in her school and so on. If this is what they want, then I would propose to Aravot to publish such a retraction…

And I would ask the lawyer, hereafter, prior to demanding a retraction or a response, to read the Law of the Republic of Armenia on Mass Media — specifically, Article 8, which refers to the right of retraction and response.

The second demand, as we saw, refers to revealing the source. We are forced to remind not only this gentleman, but also those hereafter demanding news outlets to reveal their confidential sources of Article 5 on “Protection of sources of information” of the RA Law on Mass Media. It is worth quoting in full:

1. The persons implementing media activity and the journalists shall not be obliged to disclose their sources of information, with the exception of the cases set forth in the 2nd part of this Article.

2. The implementer of media activity or a journalist can be obliged to disclose the source of information by the court decision, in the course of a criminal proceeding with the aim of revealing heavy or most heavy crimes, if societal interest in law enforcement overweighs the societal interest in protecting the sources of information, and all other means to protect public interest are exhausted. In such cases, at the petition of the journalist, the court proceedings can be held in camera.

A lawyer, surely, is not the court (in any case, that’s what I think) and neither have criminal proceedings been launched “with the aim of revealing heavy or most heavy crimes”. Everything is simple and clear in the law, and let’s attribute neglecting this provision of the law to the lawyer’s (to put it mildly) forgetfulness…

Oh, by the way, at the end of the letter, the lawyer notes that if they don’t receive a positive response, they will be forced to take the matter to court. Probably the management of Aravot wouldn’t want that, but I pleadingly ask: Mr. Lawyer, appeal to the court — it’s been a long time since I’ve sat in a trial based on absurd demands. I’ll come and laugh my heart out…

P.S. In reality, the school principal and her lawyer — perhaps unwittingly — revealed their true motives. The letter sent to the reporter reads: “I consider it necessary to say, as well, that our issue is with neither Aravot nor you personally but with the person or persons who conveyed this information to you.”

Do you get it? In other words, tell us so we can punish them… How could [the tattletales] dare?… In Sweden, for example, for sending such a letter, a lawyer would lose his license, while the school principal would resign.

But since the law in Armenia, unlike the law in Sweden, does not prescribe punitive measures for those who demand a news outlet to reveal its confidential source, we are left only to laugh at this absurd demand of the lawyer’s…